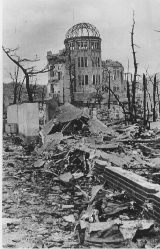 The term has often been associated with nuclear explosion
Nuclear explosion
A nuclear explosion occurs as a result of the rapid release of energy from an intentionally high-speed nuclear reaction. The driving reaction may be nuclear fission, nuclear fusion or a multistage cascading combination of the two, though to date all fusion based weapons have used a fission device...
s and other large bomb
Bomb
A bomb is any of a range of explosive weapons that only rely on the exothermic reaction of an explosive material to provide an extremely sudden and violent release of energy...
s, but is also used in relation to earthquake
Earthquake
An earthquake is the result of a sudden release of energy in the Earth's crust that creates seismic waves. The seismicity, seismism or seismic activity of an area refers to the frequency, type and size of earthquakes experienced over a period of time...
s, epidemic
Epidemic
In epidemiology, an epidemic , occurs when new cases of a certain disease, in a given human population, and during a given period, substantially exceed what is expected based on recent experience...
s and other disaster
Disaster
A disaster is a natural or man-made hazard that has come to fruition, resulting in an event of substantial extent causing significant physical damage or destruction, loss of life, or drastic change to the environment...
s to mark the point of the most severe damage or destruction. The term is often re-used for disasters that have a geographic or conceptual epicenter.

The origins of the term ground zero began with the Manhattan Project
Manhattan Project
The Manhattan Project was a research and development program, led by the United States with participation from the United Kingdom and Canada, that produced the first atomic bomb during World War II. From 1942 to 1946, the project was under the direction of Major General Leslie Groves of the US Army...
and the bombing of Japan
Atomic bombings of Hiroshima and Nagasaki
During the final stages of World War II in 1945, the United States conducted two atomic bombings against the cities of Hiroshima and Nagasaki in Japan, the first on August 6, 1945, and the second on August 9, 1945. These two events are the only use of nuclear weapons in war to date.For six months...
. The Strategic Bombing Survey
Strategic bombing survey (Atomic attacks)
"Strategic bombing survey " was a United States Army Air Forces survey of the impact of atomic attacks in World War II in the Pacific theater.A separate report was made for the rest of the Pacific War.-External links:* *...
of the atomic attacks, released in June 1946, used the term liberally, defining it as: "For convenience, the term 'ground zero' will be used to designate the point on the ground directly beneath the point of detonation, or 'air zero.'" William Laurence, an embedded reporter with the Manhattan Project, reported that "Zero" was "the code name given to the spot chosen for the atomic bomb test" in 1945.

The Oxford English Dictionary
Oxford English Dictionary
The Oxford English Dictionary , published by the Oxford University Press, is the self-styled premier dictionary of the English language. Two fully bound print editions of the OED have been published under its current name, in 1928 and 1989. The first edition was published in twelve volumes , and...
, citing the use of the term in a 1946 New York Times report on the destroyed city of Hiroshima
Hiroshima
is the capital of Hiroshima Prefecture, and the largest city in the Chūgoku region of western Honshu, the largest island of Japan. It became best known as the first city in history to be destroyed by a nuclear weapon when the United States Army Air Forces dropped an atomic bomb on it at 8:15 A.M...
, defines ground zero as "that part of the ground situated immediately under an exploding bomb, especially an atomic one."

The term was military slang, used at the Trinity site where the weapon tower for the first nuclear weapon
Nuclear weapon
A nuclear weapon is an explosive device that derives its destructive force from nuclear reactions, either fission or a combination of fission and fusion. Both reactions release vast quantities of energy from relatively small amounts of matter. The first fission bomb test released the same amount...
was at "point zero", and moved into general use very shortly after the end of World War II
World War II
World War II, or the Second World War , was a global conflict lasting from 1939 to 1945, involving most of the world's nations—including all of the great powers—eventually forming two opposing military alliances: the Allies and the Axis...
. At Hiroshima, the hypocenter of the attack was Shima Hospital
Shima hospital
was a Japanese hospital destroyed by the atomic bombing of Hiroshima, Japan, on August 6, 1945. Shima Hospital is considered to be ground zero of the atomic bombing of Hiroshima....
.

The Pentagon
The Pentagon
The Pentagon is the headquarters of the United States Department of Defense, located in Arlington County, Virginia. As a symbol of the U.S. military, "the Pentagon" is often used metonymically to refer to the Department of Defense rather than the building itself.Designed by the American architect...
, the headquarters of the U.S. Department of Defense in Arlington, Virginia was thought of as the most likely target of a nuclear missile strike during the Cold War
Cold War
The Cold War was the continuing state from roughly 1946 to 1991 of political conflict, military tension, proxy wars, and economic competition between the Communist World—primarily the Soviet Union and its satellite states and allies—and the powers of the Western world, primarily the United States...
. The open space in the center is informally known as ground zero, and a snack bar located at the center of this plaza was nicknamed "Cafe Ground Zero". 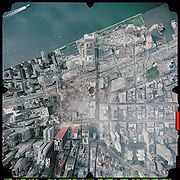 Since 2001 in the United States, especially in the media, "Ground Zero" is generally understood to mean the site of the World Trade Center
World Trade Center
The original World Trade Center was a complex with seven buildings featuring landmark twin towers in Lower Manhattan, New York City, United States. The complex opened on April 4, 1973, and was destroyed in 2001 during the September 11 attacks. The site is currently being rebuilt with five new...
, which was destroyed in the September 11 attacks. The phrase was being applied to the World Trade Center site within hours after the towers collapsed. It appears that the first use of the term on a mainstream North American media outlet in reference to the September 11 attacks was at approximately 11:55 am when an eye witness who claimed to be a Fox News freelancer referred twice to ground zero. He may also have been the first person to suggest the cause of the collapse of the towers was due to "structural failure due to fires", when most media on 9/11 were likening the collapses of WTC 1,2, and 7 to a building demolition. At 4:41 p.m., in an interview with Peter Jennings
Peter Jennings
Peter Charles Archibald Ewart Jennings, CM was a Canadian American journalist and news anchor. He was the sole anchor of ABC's World News Tonight from 1983 until his death in 2005 of complications from lung cancer...
on ABC News
ABC News
ABC News is the news gathering and broadcasting division of American broadcast television network ABC, a subsidiary of The Walt Disney Company...
, attorney and survivor of the attacks Tom Humphreys (spelled "Humphries" on air) said, in reference to the collapse of the South Tower, that