Encyclopedia
"History Will Absolve Me" (Spanish:"La historia me absolverá") is the concluding sentence and subsequent title of a four-hour speech made by Fidel Castro
Fidel Castro
Fidel Alejandro Castro Ruz is a Cuban revolutionary and politician, having held the position of Prime Minister of Cuba from 1959 to 1976, and then President from 1976 to 2008. He also served as the First Secretary of the Communist Party of Cuba from the party's foundation in 1961 until 2011...
on 16 October 1953. Castro made the speech in his own defense in court against the charges brought against him after leading an attack on the Moncada Barracks
Moncada Barracks
The Moncada Barracks was a military barracks in Santiago de Cuba, named after General Guillermón Moncada, a hero of the War of Independence. On July 26, 1953, the barracks was the site of an armed attack by a small group of revolutionaries led by Fidel Castro. This armed attack is widely accepted...
. Though no record of Castro's words was kept, he reconstructed them later for publication in what was to become the manifesto of his 26th of July Movement
26th of July Movement
The 26th of July Movement was the revolutionary organization planned and led by Fidel Castro that in 1959 overthrew the Fulgencio Batista government in Cuba...
.

Though sentenced to terms of up to 15 years for their roles in the Moncada attack, all of the rebels were released after an amnesty granted by Fulgencio Batista in 1955. Castro relocated to Mexico, before returning to Cuba on the Granma
Granma (yacht)
Granma is the yacht that was used to transport 82 fighters of the Cuban Revolution from Mexico to Cuba in 1956 for the purpose of overthrowing the regime of Fulgencio Batista. The 60-foot diesel-powered cabin cruiser was built in 1943 and designed to accommodate 12 people...
yacht in December 1956. 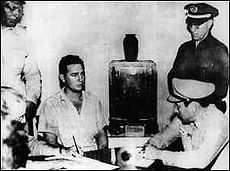 Castro made his first court appearance on 21 September 1953 in Santiago
Santiago de Cuba
Santiago de Cuba is the second largest city of Cuba and capital city of Santiago de Cuba Province in the south-eastern area of the island, some south-east of the Cuban capital of Havana....
, where he defended around 100 other defendants arrested after the Moncada attack. Castro, a qualified lawyer, took on their defense, basing his case on the illegality of the Batista regime and the inherent right of the citizen to rebel against what he perceived to be an illegal government. When asked who was responsible for the attack, Castro replied that "the intellectual author of this revolution is José Martí
José Martí
José Julián Martí Pérez was a Cuban national hero and an important figure in Latin American literature. In his short life he was a poet, an essayist, a journalist, a revolutionary philosopher, a translator, a professor, a publisher, and a political theorist. He was also a part of the Cuban...
, the apostle of our independence".

Castro's defense was so successful that only 26 prisoners were found guilty and most were treated leniently. Castro's brother Raúl
Raúl Castro
Raúl Modesto Castro Ruz is a Cuban politician and revolutionary who has been President of the Council of State of Cuba and the President of the Council of Ministers of Cuba since 2008; he previously exercised presidential powers in an acting capacity from 2006 to 2008...
, a leader of the attack, was sentenced to 13 years on what was then called the Isle of Pines
Isle of Youth
Isla de la Juventud is the second-largest Cuban island and the seventh-largest island in the West Indies . The island has an area and is 100 km south of the island of Cuba, across the Gulf of Batabanó...
. While he was incarcerated awaiting trial, efforts were made to poison Fidel Castro to prevent him from appearing in court.

Castro was brought before a different court on 16 October 1953 for sentencing. It was here that he reportedly made his four hour speech justifying his actions and outlining his plans for Cuba. During the trial, public outrage at the treatment of the prisoners was seriously diminishing Batista's standing among the population. A local judge telephoned Batista's staff to complain that Batista was reviving the brutal era of former president Gerardo Machado
Gerardo Machado
Gerardo Machado y Morales was President of Cuba and a general of the Cuban War of Independence...
, while a Santiago bishop
Bishop
A bishop is an ordained or consecrated member of the Christian clergy who is generally entrusted with a position of authority and oversight. Within the Catholic Church, Eastern Orthodox, Oriental Orthodox Churches, in the Assyrian Church of the East, in the Independent Catholic Churches, and in the...
called upon the courts to spare Castro's life and sought support from Cuba's upper class Catholic contingent. Though Castro was sentenced to join his brother in prison for 15 years, the trial elevated him to semi-heroic status on the island.


Details of the speech

Castro's speech contained numerous evocations of the "father of Cuban independence" José Martí, whilst depicting Batista as a tyrant. According to Castro, Batista was a "monstrum horrendum ... without entrails" who had committed an act of treachery in 1933 when he initiated a coup to oust Cuban president
President of Cuba
--209.174.31.28 18:43, 22 November 2011 The President of Cuba is the Head of state of Cuba. According to the Cuban Constitution of 1976, the President is the chief executive of the Council of State of Cuba...
Ramón Grau
Ramón Grau
Dr. Ramón Grau San Martín was a Cuban physician and the President of Cuba .-Youth:...
. Castro went on to speak of "700,000 Cubans without work", launching an attack on Cuba's extant healthcare
Healthcare of Cuba
The Cuban government operates a national health system and assumes fiscal and administrative responsibility for the health care of all its citizens. There are no private hospitals or clinics as all health services are government-run. The present Minister for Public Health is José Ramón Balaguer.An...
and schooling
Education in Cuba
Education in Cuba has been a highly ranked system for many years. The University of Havana was founded in 1727 and there are a number of other well-established colleges and universities. Following the 1959 revolution, the Castro government nationalized all educational institutions, and created a...
, and asserting that 30% of Cuba's farm people couldn't even write their own names.

In Castro's published manifesto, based on his 1953 speech, he gave details of the "five revolutionary laws" he wished to see implemented on the island:-