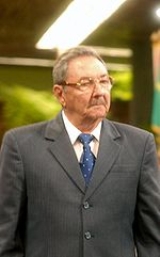 The President of the Council of State is elected by the National Assembly of People's Power. National elections to the assembly take place every five years. The 23rd and current President of Cuba is Raul Castro
Raúl Castro
Raúl Modesto Castro Ruz is a Cuban politician and revolutionary who has been President of the Council of State of Cuba and the President of the Council of Ministers of Cuba since 2008; he previously exercised presidential powers in an acting capacity from 2006 to 2008...
, who replaced his brother, Fidel Castro
Fidel Castro
Fidel Alejandro Castro Ruz is a Cuban revolutionary and politician, having held the position of Prime Minister of Cuba from 1959 to 1976, and then President from 1976 to 2008. He also served as the First Secretary of the Communist Party of Cuba from the party's foundation in 1961 until 2011...
, on February 24, 2008, following Fidel Castro's resignation due to his "critical health condition".