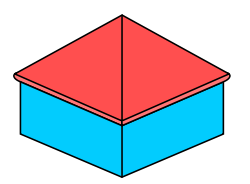 A hip roof, or hipped roof, is a type of roof
Roof
A roof is the covering on the uppermost part of a building. A roof protects the building and its contents from the effects of weather. Structures that require roofs range from a letter box to a cathedral or stadium, dwellings being the most numerous....
where all sides slope downwards to the walls, usually with a fairly gentle slope. Thus it is a house
House
A house is a building or structure that has the ability to be occupied for dwelling by human beings or other creatures. The term house includes many kinds of different dwellings ranging from rudimentary huts of nomadic tribes to free standing individual structures...
with no gable
Gable
A gable is the generally triangular portion of a wall between the edges of a sloping roof. The shape of the gable and how it is detailed depends on the structural system being used and aesthetic concerns. Thus the type of roof enclosing the volume dictates the shape of the gable...
s or other vertical sides to the roof. A square hip roof is shaped like a pyramid
Pyramid
A pyramid is a structure whose outer surfaces are triangular and converge at a single point. The base of a pyramid can be trilateral, quadrilateral, or any polygon shape, meaning that a pyramid has at least three triangular surfaces...
. Hip roofs on the houses could have two triangular side and two trapezoidal one. A hip roof on a rectangular plan has four faces. They are almost always at the same pitch or slope, which makes them symmetrical about the centerlines. Hip roofs have a consistent level fascia, meaning that a gutter can be fitted all around. Hip roofs often have dormer
Dormer
A dormer is a structural element of a building that protrudes from the plane of a sloping roof surface. Dormers are used, either in original construction or as later additions, to create usable space in the roof of a building by adding headroom and usually also by enabling addition of windows.Often...
slanted sides.

Hip roofs are more difficult to construct than a gabled roof, requiring somewhat more complex systems of trusses. Although the roof itself is harder to construct, the walls that carry the roof are easier to build, being all one level. Hip roofs can be constructed on a wide variety of plan shapes. Each ridge is central over the rectangle of building below it. The triangular faces of the roof are called the hip ends, and they are bounded by the hips themselves. The hips sit on an external corner of the building and rise to the ridge. Where the building has an internal corner a valley makes the join between the sloping surfaces. They have the advantage of giving a compact, solid appearance to a structure.

In modern domestic architecture, hip roofs have been seen to represent comfort, practicality, and solidness. They are thus commonly seen in bungalow
Bungalow
A bungalow is a type of house, with varying meanings across the world. Common features to many of these definitions include being detached, low-rise , and the use of verandahs...
s and cottage
Cottage
__toc__In modern usage, a cottage is usually a modest, often cozy dwelling, typically in a rural or semi-rural location. However there are cottage-style dwellings in cities, and in places such as Canada the term exists with no connotations of size at all...
s, and have been integral to styles such as the American Foursquare
American Foursquare
The American Foursquare or American Four Square is an American house style popular from the mid-1890s to the late 1930s. A reaction to the ornate and mass produced elements of the Victorian and other Revival styles popular throughout the last half of the 19th century, the American Foursquare was...
. However, the hip roof has been used in many different styles of architecture and in a wide array of structures. A hip roof is self-bracing. It does not need the same amount of diagonal bracing (wind bracing) that a gable roof requires.

A possible disadvantage of a hip roof, compared with a gable roof on the same plan, is that there is less room inside the roof space. Access is more difficult for maintenance.

A mansard roof is a variation on a hip roof, with two different roof angles, one much steeper than the other.

Another variation is the gablet (UK terminology) or Dutch gable roof (US and Australasian terminology), which has a hip with a small gable (the gablet) above it. This type simplifies the construction of the roof; no girder trusses are required, but it still has level walls and consistent eaves
Eaves
The eaves of a roof are its lower edges. They usually project beyond the walls of the building to carry rain water away.-Etymology:"Eaves" is derived from Old English and is both the singular and plural form of the word.- Function :...
.

A half-hip, clipped-gable or jerkin head roof has a gable, but the upper point of the gable is replaced by a small hip, squaring off the top of the gable. The lower edge of the half-hip may have a gutter which leads back on to the remainder of the roof on one or both sides. Both the gablet roof and the half-hipped roof are intermediate between the gabled and fully hipped types: the gablet roof has a gable above a hip, while a half-hipped roof has a hip above a gable.

Half-hipped roofs are very common in Denmark
Denmark
Denmark is a Scandinavian country in Northern Europe. The countries of Denmark and Greenland, as well as the Faroe Islands, constitute the Kingdom of Denmark . It is the southernmost of the Nordic countries, southwest of Sweden and south of Norway, and bordered to the south by Germany. Denmark...
, Germany
Germany
Germany , officially the Federal Republic of Germany , is a federal parliamentary republic in Europe. The country consists of 16 states while the capital and largest city is Berlin. Germany covers an area of 357,021 km2 and has a largely temperate seasonal climate...
and especially in Austria
Austria
Austria , officially the Republic of Austria , is a landlocked country of roughly 8.4 million people in Central Europe. It is bordered by the Czech Republic and Germany to the north, Slovakia and Hungary to the east, Slovenia and Italy to the south, and Switzerland and Liechtenstein to the...
.

Half hip roofs are sometimes referred to as "Dutch hip", but this term is easily confused with "Dutch gable".

A shallow, polygonal hip roof typically found topping gazebos
Gazebo
A gazebo is a pavilion structure, sometimes octagonal, that may be built, in parks, gardens, and spacious public areas. Gazebos are freestanding or attached to a garden wall, roofed, and open on all sides; they provide shade, shelter, ornamental features in a landscape, and a place to rest...
and other pavilion structures
Pavilion (structure)
In architecture a pavilion has two main meanings.-Free-standing structure:Pavilion may refer to a free-standing structure sited a short distance from a main residence, whose architecture makes it an object of pleasure. Large or small, there is usually a connection with relaxation and pleasure in...
.

A pointed roof seen on spires or towers oriented so that has four gable ends.
See Church of St Mary the Blessed Virgin, Sompting
Church of St Mary the Blessed Virgin, Sompting
The Church of St Mary the Blessed Virgin, also known as St Mary the Virgin Church and St Mary's Church, is the Church of England parish church of Sompting in the Adur district of West Sussex. It stands on a rural lane north of the urban area that now surrounds the village, and retains much 11th-...
, Speyer Cathedral
Speyer Cathedral
The Speyer Cathedral, officially the Imperial Cathedral Basilica of the Assumption and St Stephen, in Latin: Domus sanctae Mariae Spirae in Speyer, Germany, is the seat of the Roman Catholic Bishop of Speyer and is suffragan to the Archdiocese of Bamberg. The cathedral, which is dedicated to St...
or Limburg Cathedral
Limburg Cathedral
The Catholic Cathedral of Limburg, also known as Georgsdom or Limburger Dom in German after its dedication to Saint George, is located above the old town of Limburg in Hesse, Germany. Its high location on a rock above the Lahn provides its visibility from far away...
.