Hillsborough is a village
Village
A village is a clustered human settlement or community, larger than a hamlet with the population ranging from a few hundred to a few thousand , Though often located in rural areas, the term urban village is also applied to certain urban neighbourhoods, such as the West Village in Manhattan, New...
and townland
Townland
A townland or bally is a small geographical division of land used in Ireland. The townland system is of Gaelic origin—most townlands are believed to pre-date the Norman invasion and most have names derived from the Irish language...
in County Down
County Down
-Cities:*Belfast *Newry -Large towns:*Dundonald*Newtownards*Bangor-Medium towns:...
, Northern Ireland
Northern Ireland
Northern Ireland is one of the four countries of the United Kingdom. Situated in the north-east of the island of Ireland, it shares a border with the Republic of Ireland to the south and west...
, situated 19 km (11.8 mi) from the city of Belfast
Belfast
Belfast is the capital of and largest city in Northern Ireland. By population, it is the 14th biggest city in the United Kingdom and second biggest on the island of Ireland . It is the seat of the devolved government and legislative Northern Ireland Assembly...
. It is within the Lisburn City Council
Lisburn City Council
Lisburn City Council is a district council covering an area partly in County Antrim and partly in County Down in Northern Ireland. The council is the second largest in the Belfast Metropolitan Area. Council headquarters are in the city of Lisburn, upon which was conferred city status in May 2002 as...
area.

The historic centre of the village contains significant amounts of Georgian architecture. The village was originally a compact settlement hosting a regular market. More recently land to the north of the village has been developed as housing and Hillsborough has become part of the commuter belt of Belfast. In recent years townhouses and apartments have been built closer to the centre of the village, and the former civic building of Lisburn Borough Council has been converted to residential use. That building is in twentieth century neo-Georgian style. Development to the east of the village is continuing to swell Hillsborough's population. The associated settlements of Culcavy and Aghnatrisk to the north-west are also growing.

A prominent feature of the east and south approaches to Hillsborough is a 5-mile wall which encloses the "Park Dam", an artificial lake, and the forest surrounding it.

In 2007 Hillsborough won 3rd place in the Ulster in Bloom large village competition.

Before 1661, the townland was known as Crumlin or Cromlin . By 1661 the townland and the settlement within it had been re-named Hillsborough. It was named after Sir Arthur Hill, who built Hillsborough Fort in 1650 to command the road from Dublin to Carrickfergus
Carrickfergus
Carrickfergus , known locally and colloquially as "Carrick", is a large town in County Antrim, Northern Ireland. It is located on the north shore of Belfast Lough, from Belfast. The town had a population of 27,201 at the 2001 Census and takes its name from Fergus Mór mac Eirc, the 6th century king...
. The Hill family became the Earls of Hillsborough, then Marquises of Downshire. Their influence is seen elsewhere in Northern Ireland, having also lent their name to Hilltown
Hilltown, County Down
Hilltown is a small village within the townland of Carcullion in County Down, Northern Ireland. Hilltown is the main village of the parish of Clonduff which also contains rural areas and another village named Cabra...
and Hillhall
Hillhall
Hillhall is a townland and non-nucleated village in County Down, Northern Ireland, near Lisburn. In the 2001 Census it had a population of about one hundred people. It lies in the Lagan Valley Regional Park and the Lisburn City Council area...
.

A prominent memorial to the 3rd Marquis of Downshire (and closely resembling Nelson's column
Nelson's Column
Nelson's Column is a monument in Trafalgar Square in central London built to commemorate Admiral Horatio Nelson, who died at the Battle of Trafalgar in 1805. The monument was constructed between 1840 and 1843 to a design by William Railton at a cost of £47,000. It is a column of the Corinthian...
in Trafalgar Square
Trafalgar Square
Trafalgar Square is a public space and tourist attraction in central London, England, United Kingdom. At its centre is Nelson's Column, which is guarded by four lion statues at its base. There are a number of statues and sculptures in the square, with one plinth displaying changing pieces of...
, London) stands to the south of the village and is visible throughout much of the surrounding area.

Hillsborough is classified as an intermediate settlement by the NI Statistics and Research Agency (NISRA) (ie with population between 2,250 and 4,500 people).
On Census day (29 April 2001) there were 3,400 people living in Hillsborough. Of these: 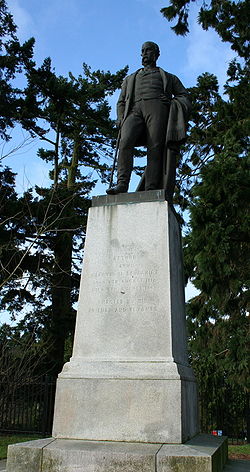