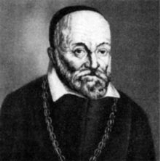 Encyclopedia
Hieronymus Fabricius or Girolamo Fabrizio or by his Latin
Latin
Latin is an Italic language originally spoken in Latium and Ancient Rome. It, along with most European languages, is a descendant of the ancient Proto-Indo-European language. Although it is considered a dead language, a number of scholars and members of the Christian clergy speak it fluently, and...
name Fabricus ab Aquapendende also Girolamo Fabrizi d'Acquapendente (1537–1619) was a pioneering anatomist
Anatomy
Anatomy is a branch of biology and medicine that is the consideration of the structure of living things. It is a general term that includes human anatomy, animal anatomy , and plant anatomy...
and surgeon
Surgeon
In medicine, a surgeon is a specialist in surgery. Surgery is a broad category of invasive medical treatment that involves the cutting of a body, whether human or animal, for a specific reason such as the removal of diseased tissue or to repair a tear or breakage...
known in medical science
Medicine
Medicine is the science and art of healing. It encompasses a variety of health care practices evolved to maintain and restore health by the prevention and treatment of illness....
as "The Father of Embryology
Embryology
Embryology is a science which is about the development of an embryo from the fertilization of the ovum to the fetus stage...
."

In 1594 he revolutionized the teaching of anatomy when he designed the first permanent theater for public anatomical dissection
Dissection
Dissection is usually the process of disassembling and observing something to determine its internal structure and as an aid to discerning the functions and relationships of its components....
s. Julius Casserius (1561–1616) of Piacenza
Piacenza
Piacenza is a city and comune in the Emilia-Romagna region of northern Italy. It is the capital of the province of Piacenza...
was among Fabricius' students. William Harvey
William Harvey
William Harvey was an English physician who was the first person to describe completely and in detail the systemic circulation and properties of blood being pumped to the body by the heart...
(1578–1657) and Adriaan van den Spiegel
Adriaan van den Spiegel
Adriaan van den Spiegel, name sometimes written as Adrianus Spigelius was a Flemish anatomist who was born in Brussels. For much of his career he practiced medicine in Padua, and is considered one of the great physicians associated with that city...
(1578–1625) also studied under Fabricius, beginning around 1598. Julius Casserius would later succeed Fabricius as Professor of Anatomy at the University of Padua in 1604, and Adriaan van den Spiegel succeeded Casserius in that position in 1615.

By dissecting animals, Fabricius investigated the formation of the fetus
Fetus
A fetus is a developing mammal or other viviparous vertebrate after the embryonic stage and before birth.In humans, the fetal stage of prenatal development starts at the beginning of the 11th week in gestational age, which is the 9th week after fertilization.-Etymology and spelling variations:The...
, the structure of the esophagus
Esophagus
The esophagus is an organ in vertebrates which consists of a muscular tube through which food passes from the pharynx to the stomach. During swallowing, food passes from the mouth through the pharynx into the esophagus and travels via peristalsis to the stomach...
, stomach
Stomach
The stomach is a muscular, hollow, dilated part of the alimentary canal which functions as an important organ of the digestive tract in some animals, including vertebrates, echinoderms, insects , and molluscs. It is involved in the second phase of digestion, following mastication .The stomach is...
and intestine
Intestine
In human anatomy, the intestine is the segment of the alimentary canal extending from the pyloric sphincter of the stomach to the anus and, in humans and other mammals, consists of two segments, the small intestine and the large intestine...
s, and the peculiarities of the eye, the ear, and the larynx
Larynx
The larynx , commonly called the voice box, is an organ in the neck of amphibians, reptiles and mammals involved in breathing, sound production, and protecting the trachea against food aspiration. It manipulates pitch and volume...
. He was the first to describe the membranous folds that he called "valves" in the interior of vein
Vein
In the circulatory system, veins are blood vessels that carry blood towards the heart. Most veins carry deoxygenated blood from the tissues back to the heart; exceptions are the pulmonary and umbilical veins, both of which carry oxygenated blood to the heart...
s. These valves are now understood to prevent retrograde flow of blood within the veins, thus facilitating antegrade flow of blood towards the heart, though Fabricius did not understand their role at that time.

In his Tabulae Pictae, first published in 1600, Fabricius described the cerebral fissure separating the temporal lobe
Temporal lobe
The temporal lobe is a region of the cerebral cortex that is located beneath the Sylvian fissure on both cerebral hemispheres of the mammalian brain....
from the frontal lobe
Frontal lobe
The frontal lobe is an area in the brain of humans and other mammals, located at the front of each cerebral hemisphere and positioned anterior to the parietal lobe and superior and anterior to the temporal lobes...
. However, Fabricius' discovery was not recognized until recently. Instead, Danish anatomist Caspar Bartholini
Caspar Bartholin the Elder
Caspar Bartholin the Elder was born at Malmø, Denmark and was a polymath, finally accepting a professorship in medicine at the University of Copenhagen, Denmark, in 1613...
credits Franciscus Sylvius
Franciscus Sylvius
Franciscus Sylvius , born Franz de le Boë, was a Dutch physician and scientist who was an early champion of Descartes', Van Helmont's and William Harvey's work and theories...
with the discovery, and Bartholin's son Thomas named it the Sylvian fissure
Lateral sulcus
-External links:* * * http://www.uams.edu/radiology/education/residency/diagnostic/pdf/sylvian_cistern_RSNA2003.pdf...
in the 1641 edition of the textbook Institutiones anatomicae.

The Bursa of Fabricius
Bursa of Fabricius
In birds, the bursa of Fabricius is the site of hematopoiesis, a specialized organ that, as first demonstrated by Bruce Glick and later by Max Cooper and Robert Good, is necessary for B cell development in birds...
(the site of hematopoiesis
Haematopoiesis
Haematopoiesis is the formation of blood cellular components. All cellular blood components are derived from haematopoietic stem cells...
in bird
Bird
Birds are feathered, winged, bipedal, endothermic , egg-laying, vertebrate animals. Around 10,000 living species and 188 families makes them the most speciose class of tetrapod vertebrates. They inhabit ecosystems across the globe, from the Arctic to the Antarctic. Extant birds range in size from...
s) is named after Fabricius. A manuscript entitled De Formatione Ovi et Pulli, found among his lecture notes after his death, was published in 1621. It contains the first description of the bursa.

Fabricius contributed much to the field of surgery. Though he never actually performed a tracheotomy
Tracheotomy
Among the oldest described surgical procedures, tracheotomy consists of making an incision on the anterior aspect of the neck and opening a direct airway through an incision in the trachea...
, his writings include descriptions of the surgical technique. He favored using a vertical incision and was the first to introduce the idea of a tracheostomy tube. This was a straight, short cannula
Cannula
A cannula or canula is a tube that can be inserted into the body, often for the delivery or removal of fluid or for the gathering of data...
that incorporated wings to prevent the tube from disappearing into the trachea
Vertebrate trachea
In tetrapod anatomy the trachea, or windpipe, is a tube that connects the pharynx or larynx to the lungs, allowing the passage of air. It is lined with pseudostratified ciliated columnar epithelium cells with goblet cells that produce mucus...
. He recommended the operation only as a last resort, to be used in cases of airway
Airway
The pulmonary airway comprises those parts of the respiratory system through which air flows, conceptually beginning at the nose and mouth, and terminating in the alveoli...
obstruction by foreign bodies
Foreign body
A foreign body is any object originating outside the body. In machinery, it can mean any unwanted intruding object.Most references to foreign bodies involve propulsion through natural orifices into hollow organs....
or secretion
Secretion
Secretion is the process of elaborating, releasing, and oozing chemicals, or a secreted chemical substance from a cell or gland. In contrast to excretion, the substance may have a certain function, rather than being a waste product...
s. Fabricius' description of the tracheotomy procedure is similar to that used today.

Julius Casserius published his own writings regarding technique and equipment for tracheotomy. Casserius recommended using a curved silver tube with several holes in it. Marco Aurelio Severino
Marco Aurelio Severino
Marco Aurelio Severino was an Italian surgeon and anatomist.-Biography:Severino was born in Tarsia , of Giovanni Jacopo Severino, a lawyer. He died of plague in 1656....
(1580–1656), a skilful surgeon and anatomist, performed at least one tracheotomy during a diphtheria
Diphtheria
Diphtheria is an upper respiratory tract illness caused by Corynebacterium diphtheriae, a facultative anaerobic, Gram-positive bacterium. It is characterized by sore throat, low fever, and an adherent membrane on the tonsils, pharynx, and/or nasal cavity...
epidemic
Epidemic
In epidemiology, an epidemic , occurs when new cases of a certain disease, in a given human population, and during a given period, substantially exceed what is expected based on recent experience...
in Naples
Naples
Naples is a city in Southern Italy, situated on the country's west coast by the Gulf of Naples. Lying between two notable volcanic regions, Mount Vesuvius and the Phlegraean Fields, it is the capital of the region of Campania and of the province of Naples...
in 1610, using the vertical incision technique recommended by Fabricius.