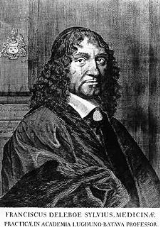 
Franciscus Sylvius born Franz de le Boë, was a Dutch physician
Physician
A physician is a health care provider who practices the profession of medicine, which is concerned with promoting, maintaining or restoring human health through the study, diagnosis, and treatment of disease, injury and other physical and mental impairments...
and scientist
Scientist
A scientist in a broad sense is one engaging in a systematic activity to acquire knowledge. In a more restricted sense, a scientist is an individual who uses the scientific method. The person may be an expert in one or more areas of science. This article focuses on the more restricted use of the word...
(chemist
Chemist
A chemist is a scientist trained in the study of chemistry. Chemists study the composition of matter and its properties such as density and acidity. Chemists carefully describe the properties they study in terms of quantities, with detail on the level of molecules and their component atoms...
, physiologist and anatomist) who was an early champion of Descartes', Van Helmont's and William Harvey
William Harvey
William Harvey was an English physician who was the first person to describe completely and in detail the systemic circulation and properties of blood being pumped to the body by the heart...
's work and theories. He was one of the earliest defenders of the circulation of the blood
Circulatory system
The circulatory system is an organ system that passes nutrients , gases, hormones, blood cells, etc...
in the Netherlands.

Sylvius, a Latinization of "de le Boë" translated as "of the woods", was born in Hanau
Hanau
Hanau is a town in the Main-Kinzig-Kreis, in Hesse, Germany. It is located 25 km east of Frankfurt am Main. Its station is a major railway junction.- Geography :...
, Germany
Germany
Germany , officially the Federal Republic of Germany , is a federal parliamentary republic in Europe. The country consists of 16 states while the capital and largest city is Berlin. Germany covers an area of 357,021 km2 and has a largely temperate seasonal climate...
to an affluent family originally from Cambrai
Cambrai
Cambrai is a commune in the Nord department in northern France. It is a sub-prefecture of the department.Cambrai is the seat of an archdiocese whose jurisdiction was immense during the Middle Ages. The territory of the Bishopric of Cambrai, roughly coinciding with the shire of Brabant, included...
, but worked and died in Netherlands
Netherlands
The Netherlands is a constituent country of the Kingdom of the Netherlands, located mainly in North-West Europe and with several islands in the Caribbean. Mainland Netherlands borders the North Sea to the north and west, Belgium to the south, and Germany to the east, and shares maritime borders...
. He studied medicine at the Protestant Academy of Sedan
Academy of Sedan
The Academy of Sedan was a Huguenot academy in Sedan, founded in 1579 and suppressed in 1681. It was one of the main centres for the production of Reformed pastors in France for a hundred years.-History:...
, and from 1632 - 1634 in Leiden
Leiden University
Leiden University , located in the city of Leiden, is the oldest university in the Netherlands. The university was founded in 1575 by William, Prince of Orange, leader of the Dutch Revolt in the Eighty Years' War. The royal Dutch House of Orange-Nassau and Leiden University still have a close...
under Adolph Vorstius and Otto Heurnius
Otto Heurnius
Otto Heurnius was a Dutch physician, theologian and philosopher.-Life:He succeeded his father Johannes Heurnius as professor of medicine at the University of Leiden; and took over anatomy teaching from Pieter Pauw from 1617. Along side his practical anatomy teaching, he had the care of a very...
. In 1634 he held a disputation Positiones variae medicae under the presidency of Vorstius, in which he defended the proposition that there should be a pulmonary circulation
Pulmonary circulation
Pulmonary circulation is the half portion of the cardiovascular system which carries Oxygen-depleted Blood away from the heart, to the Lungs, and returns oxygenated blood back to the heart. Encyclopedic description and discovery of the pulmonary circulation is widely attributed to Doctor Ibn...
. After that Sylvius made a study tour to Jena
Jena
Jena is a university city in central Germany on the river Saale. It has a population of approx. 103,000 and is the second largest city in the federal state of Thuringia, after Erfurt.-History:Jena was first mentioned in an 1182 document...
and Wittenberg
Wittenberg
Wittenberg, officially Lutherstadt Wittenberg, is a city in Germany in the Bundesland Saxony-Anhalt, on the river Elbe. It has a population of about 50,000....
, and on March 16, 1637 he defended a thesis entitled De animali motu ejusque laesionibus at the University of Basel
University of Basel
The University of Basel is located in Basel, Switzerland, and is considered to be one of leading universities in the country...
under the presidency of Emmanuel Stupanus
Emmanuel Stupanus
Emmanuel Stupanus or Stuppan was a Swiss physician and professor in Basel.- Life and work :...
. After practicing medicine in his hometown Hanau he returned to Leiden in 1639 to lecture. In this period he became famous for his demonstrations on circulation
Circulatory system
The circulatory system is an organ system that passes nutrients , gases, hormones, blood cells, etc...
. From 1641 on he had a lucrative medical practice in Amsterdam
Amsterdam
Amsterdam is the largest city and the capital of the Netherlands. The current position of Amsterdam as capital city of the Kingdom of the Netherlands is governed by the constitution of August 24, 1815 and its successors. Amsterdam has a population of 783,364 within city limits, an urban population...
. While in Amsterdam he met Glauber
Johann Rudolf Glauber
Johann Rudolf Glauber was a German-Dutch alchemist and chemist. Some historians of science have described him as one of the first chemical engineers...
, who introduced him to chemistry
Chemistry
Chemistry is the science of matter, especially its chemical reactions, but also its composition, structure and properties. Chemistry is concerned with atoms and their interactions with other atoms, and particularly with the properties of chemical bonds....
. In 1658 he was appointed the professor of medicine at the University of Leiden and was paid 1800 guilders which was twice the usual salary. He was the University's Vice-Chancellor in 1669-70. 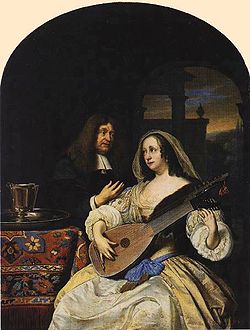 In 1669 Sylvius founded the first academic chemical laboratory. For this reason, the building in which much of the Leiden University chemistry and natural science faculties are housed has the name Sylvius Laboratory. His most famous students were Jan Swammerdam
Jan Swammerdam
Jan Swammerdam was a Dutch biologist and microscopist. His work on insects demonstrated that the various phases during the life of an insect—egg, larva, pupa, and adult—are different forms of the same animal. As part of his anatomical research, he carried out experiments on muscle contraction...
, Reinier de Graaf, Niels Stensen and Burchard de Volder
Burchard de Volder
Burchard de Volder was a Dutch natural philosopher.Born in a Mennonite family in Amsterdam, he first studied in Utrecht and from 1670 he studied philosophy at the University of Leiden under Franz de le Boë...
.

He founded the Iatrochemical School of Medicine
Iatrochemistry
Iatrochemistry is a branch of both chemistry and medicine. Having its roots in alchemy, iatrochemistry seeks to provide chemical solutions to diseases and medical ailments....
, according to which all life and disease processes are based on chemical actions. That school of thought attempted to understand medicine in terms of universal rules of physics and chemistry. Sylvius also introduced the concept of chemical affinity as a way to understand the way the human body uses salts and contributed greatly to the understanding of digestion and of bodily fluids. The most important work he published was Praxeos medicae idea nova (New Idea in Medical Practice, 1671).

He researched the structure of the brain
Human brain
The human brain has the same general structure as the brains of other mammals, but is over three times larger than the brain of a typical mammal with an equivalent body size. Estimates for the number of neurons in the human brain range from 80 to 120 billion...
and was credited as the discoverer of the cleft in the brain known as Sylvian fissure
Lateral sulcus
-External links:* * * http://www.uams.edu/radiology/education/residency/diagnostic/pdf/sylvian_cistern_RSNA2003.pdf...
by Caspar Bartholin
Caspar Bartholin the Elder
Caspar Bartholin the Elder was born at Malmø, Denmark and was a polymath, finally accepting a professorship in medicine at the University of Copenhagen, Denmark, in 1613...
in his 1641 book Casp. Bartolini Institutiones Anatomicae In this book, it is noted that in the preface that “We can all measure the nobility of Sylvius’s brain and talent by the marvelous, new structure of the brain” And also, “In the new images of the brain, the engraver followed the design and scalpel of the most thorough Franciscus Sylvius, to whom we owe, in this part, everything that the brain has the most, or the most wonderful of”

However Caspar Bartholin died in 1629 and Franciscus Sylvius only started medicine in 1632 and it has been argued that the words in this word describing the Sylcian fissure are either by his son Thomas Bartholin or indeed Franciscus Sylvius. In 1663 in his Disputationem Medicarum, Franciscus Sylvius under his own name described the lateral fissure: "Particularly noticeable is the deep fissure or hiatus which begins at the roots of the eyes (oculorum radices) [...] it runs posteriorly above the temples as far as the roots of the brain stem (medulla radices). [...] It divides the cerebrum into an upper, larger part and a lower, smaller part".

The mineral
Mineral
A mineral is a naturally occurring solid chemical substance formed through biogeochemical processes, having characteristic chemical composition, highly ordered atomic structure, and specific physical properties. By comparison, a rock is an aggregate of minerals and/or mineraloids and does not...
sylvite
Sylvite
Sylvite is potassium chloride in natural mineral form. It forms crystals in the isometric system very similar to normal rock salt, halite . The two are, in fact, isomorphous. Sylvite is colorless to white with shades of yellow and red due to inclusions. It has a Mohs hardness of 2.5 and a specific...
was named for Sylvius.