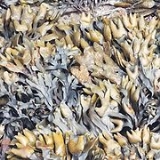 Encyclopedia
The heterokonts or stramenopiles are a major line of eukaryote
Eukaryote
A eukaryote is an organism whose cells contain complex structures enclosed within membranes. Eukaryotes may more formally be referred to as the taxon Eukarya or Eukaryota. The defining membrane-bound structure that sets eukaryotic cells apart from prokaryotic cells is the nucleus, or nuclear...
s currently containing more than 100,000 known species. Most are algae
Algae
Algae are a large and diverse group of simple, typically autotrophic organisms, ranging from unicellular to multicellular forms, such as the giant kelps that grow to 65 meters in length. They are photosynthetic like plants, and "simple" because their tissues are not organized into the many...
, ranging from the giant multicellular kelp
Kelp
Kelps are large seaweeds belonging to the brown algae in the order Laminariales. There are about 30 different genera....
to the unicellular diatom
Diatom
Diatoms are a major group of algae, and are one of the most common types of phytoplankton. Most diatoms are unicellular, although they can exist as colonies in the shape of filaments or ribbons , fans , zigzags , or stellate colonies . Diatoms are producers within the food chain...
s, which are a primary component of plankton
Plankton
Plankton are any drifting organisms that inhabit the pelagic zone of oceans, seas, or bodies of fresh water. That is, plankton are defined by their ecological niche rather than phylogenetic or taxonomic classification...
. Other notable members of the Stramenopila include the (generally parasitic) oomycetes, including Phytophthora
Phytophthora
Phytophthora is a genus of plant-damaging Oomycetes , whose member species are capable of causing enormous economic losses on crops worldwide, as well as environmental damage in natural ecosystems. The genus was first described by Heinrich Anton de Bary in 1875...
of Irish potato famine infamy and Pythium
Pythium
Pythium is a genus of parasitic oomycete. Most species are plant parasites, but Pythium insidiosum is an important pathogen of animals...
which causes seed rot and damping off.

The name heterokonts refers to the motile life cycle stage, in which the flagellate cells possess two differently-shaped flagella.

Most basal heterokonts are colorless. This suggests that they diverged before the acquisition of chloroplasts within the group. However, fucoxanthin-containing chloroplasts are also found among the haptophyte
Haptophyte
The haptophytes, classified either as the Prymnesiophyta or Haptophyta, are a division of algae.The term "Haptophyceae" is sometimes used. This ending implies classification at a lower level...
s. These two groups may have a common ancestry, and possibly also a common phylogenetic history with cryptomonad
Cryptomonad
The cryptomonads are a group of algae, most of which have plastids. They are common in freshwater, and also occur in marine and brackish habitats. Each cell is around 10-50 μm in size and flattened in shape, with an anterior groove or pocket...
s. This may be interpreted as suggesting that the ancestral heterokont was an alga, and all colorless groups arose through loss of the secondary endosymbiont and its chloroplast.

Many heterokonts are unicellular flagellate
Flagellate
Flagellates are organisms with one or more whip-like organelles called flagella. Some cells in animals may be flagellate, for instance the spermatozoa of most phyla. Flowering plants do not produce flagellate cells, but ferns, mosses, green algae, some gymnosperms and other closely related plants...
s, and most others produce flagellate cells at some point in their life-cycle, for instance as gamete
Gamete
A gamete is a cell that fuses with another cell during fertilization in organisms that reproduce sexually...
s or zoospore
Zoospore
A zoospore is a motile asexual spore that uses a flagellum for locomotion. Also called a swarm spore, these spores are created by some algae, bacteria and fungi to propagate themselves.-Flagella:...
s. The name heterokont refers to the characteristic form of these cells, which typically have two unequal flagella. The anterior or tinsel flagellum is covered with lateral bristles or mastigonemes, while the other flagellum is whiplike, smooth, and usually shorter, or sometimes reduced to a basal body. The flagella are inserted subapically or laterally, and are usually supported by four microtubule
Microtubule
Microtubules are a component of the cytoskeleton. These rope-like polymers of tubulin can grow as long as 25 micrometers and are highly dynamic. The outer diameter of microtubule is about 25 nm. Microtubules are important for maintaining cell structure, providing platforms for intracellular...
roots in a distinctive pattern.

Mastigonemes are manufactured from glycoprotein
Glycoprotein
Glycoproteins are proteins that contain oligosaccharide chains covalently attached to polypeptide side-chains. The carbohydrate is attached to the protein in a cotranslational or posttranslational modification. This process is known as glycosylation. In proteins that have segments extending...
s in the cell's endoplasmic reticulum
Endoplasmic reticulum
The endoplasmic reticulum is an organelle of cells in eukaryotic organisms that forms an interconnected network of tubules, vesicles, and cisternae...
before being transported to the anterior flagella's surface. When the tinsel flagellum moves, the mastigonemes create a retrograde current, pulling the cell through the water or bringing in food. The mastigonemes have a peculiar tripartite structure, which may be taken as the defining characteristic of the heterokonts, thereby including a few protists that do not produce cells with the typical heterokont form. Mastigonemes have been lost in a few heterkont lines, most notably the diatoms.

As noted above, classification varies considerably. Originally the heterokont algae were treated as two divisions, first within the kingdom Plantae and later the Protista:

Class Chrysophyceae (golden algae)
Class Bacillariophyceae (diatom
Diatom
Diatoms are a major group of algae, and are one of the most common types of phytoplankton. Most diatoms are unicellular, although they can exist as colonies in the shape of filaments or ribbons , fans , zigzags , or stellate colonies . Diatoms are producers within the food chain...
s)

In this scheme, however, the Chrysophyceae are paraphyletic to both other groups. As a result, various members have been given their own classes and often divisions. Recent systems often treat these as classes within a single division, called the Heterokontophyta, Chromophyta, or Ochrophyta. This is not universal, however: Round et al. treat the diatoms as a division.

The discovery that oomycetes and hyphochytrids are related to these algae, rather than fungi, as previously thought, has led many authors to include these two groups among the heterokonts. Should it turn out that they evolved from colored ancestors, the heterokont group would be paraphyletic in their absence. Once again, however, usage varies. David J. Patterson
David J. Patterson
David J. Patterson is a taxonomist specializing in the protozoa and the use of taxonomy in biodiversity informatics. He was born in Belfast, Northern Ireland on the 19th April 1950 to Doris Mary and Samuel Patterson, with one elder brother and a sister . He was educated at Belmont Primary,...
named this extended group the stramenopiles, characterized by the presence of tripartite mastigonemes, mitochondria
Mitochondrion
In cell biology, a mitochondrion is a membrane-enclosed organelle found in most eukaryotic cells. These organelles range from 0.5 to 1.0 micrometers in diameter...
with tubular crista
Crista
Cristae are the internal compartments formed by the inner membrane of a mitochondrion. They are studded with proteins, including ATP synthase and a variety of cytochromes. The maximum surface for chemical reactions to occur is within the mitochondria...
e, and open mitosis
Mitosis
Mitosis is the process by which a eukaryotic cell separates the chromosomes in its cell nucleus into two identical sets, in two separate nuclei. It is generally followed immediately by cytokinesis, which divides the nuclei, cytoplasm, organelles and cell membrane into two cells containing roughly...
. He used the stramenopiles as a prototype for a classification without Linnaean rank. Their composition has been essentially stable, but their use within ranked systems varies.

Thomas Cavalier-Smith
Thomas Cavalier-Smith
Professor Thomas Cavalier-Smith , FRS, FRSC, NERC Professorial Fellow, is a Professor of Evolutionary Biology in the Department of Zoology, at the University of Oxford...
treats the heterokonts as identical in composition with the stramenopiles; this is the definition followed here. He has proposed placing them in a separate kingdom Chromalveolata, together with the haptophytes, cryptomonads and alveolates. This is one of the most common revisions to the five-kingdom system
Kingdom (biology)
In biology, kingdom is a taxonomic rank, which is either the highest rank or in the more recent three-domain system, the rank below domain. Kingdoms are divided into smaller groups called phyla or divisions in botany...
, but has not been generally adopted, partly because some biologists doubt their monophyly. A few treat the Chromalveolata as identical in composition with the heterokonts, or list them as a kingdom Stramenopila.

The origin of the name stramenopile is explained by Adl and coauthors:

Regarding the spelling of stramenopile, it was originally spelled stramenopile. The Latin word for ‘‘straw’’ is stramine-us, -a, -um, adj. [stramen], made of straw—-thus, it should have been spelled straminopile. However, Patterson (1989) clearly stated that this is a common name (hence, lower case, not capitalized) and, as a common name, it can be spelled as Patterson chooses. If he had stipulated that the name was a formal name, governed by rules of nomenclature, then his spelling would have been an orthogonal mutation and one would simply correct the spelling in subsequent publications (e.g. Straminopiles). But, it was not Patterson’s desire to use the term in a formal sense. Thus, if we use it in a formal sense, it must be formally described (and in addition, in Latin, if it is to be used botanically). However, and here is the strange part of this, many people liked the name, but wanted it to be used formally. So they capitalized the ﬁrst letter, and made it Stramenopiles; others corrected the Latin spelling to Straminopiles.