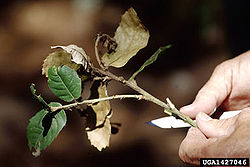 Phytophthora is a genus
Genus
In biology, a genus is a low-level taxonomic rank used in the biological classification of living and fossil organisms, which is an example of definition by genus and differentia...
of plant-damaging Oomycetes (water molds), whose member species are capable of causing enormous economic losses on crops worldwide, as well as environmental damage in natural ecosystems. The genus was first described by Heinrich Anton de Bary
Anton de Bary
Heinrich Anton de Bary was a German surgeon, botanist, microbiologist, and mycologist ....
in 1875. Approximately 100 species have been described, although 100-500 undiscovered Phytophthora species are estimated to exist.

Phytophthora spp.
Species
In biology, a species is one of the basic units of biological classification and a taxonomic rank. A species is often defined as a group of organisms capable of interbreeding and producing fertile offspring. While in many cases this definition is adequate, more precise or differing measures are...
are mostly pathogens of dicotyledon
Dicotyledon
The dicotyledons, also known as dicots, are a group of flowering plants whose seed typically has two embryonic leaves or cotyledons. There are around 199,350 species within this group...
s, and are relatively host-specific parasites. Many species of Phytophthora are plant
Plant
Plants are living organisms belonging to the kingdom Plantae. Precise definitions of the kingdom vary, but as the term is used here, plants include familiar organisms such as trees, flowers, herbs, bushes, grasses, vines, ferns, mosses, and green algae. The group is also called green plants or...
pathogen
Pathogen
A pathogen gignomai "I give birth to") or infectious agent — colloquially, a germ — is a microbe or microorganism such as a virus, bacterium, prion, or fungus that causes disease in its animal or plant host...
s of considerable economic importance. Phytophthora infestans
Phytophthora infestans
Phytophthora infestans is an oomycete that causes the serious potato disease known as late blight or potato blight. . Late blight was a major culprit in the 1840s European, the 1845 Irish and 1846 Highland potato famines...
was the infective agent of the potato blight that caused the Great Irish Famine (1845-1849), and still remains the most destructive pathogen of potato crops. The soya bean root and stem rot agent, Phytophthora sojae
Phytophthora sojae
Phytophthora sojae is an oomycete and a soil-borne plant pathogen that causes stem and root rot of soybean. This is a prevalent disease in most soybean growing regions, and a major cause of crop loss . In wet conditions the pathogen produces zoospores that move in water and are attracted to soybean...
, has also caused longstanding problems for the agricultural industry. In general, plant diseases caused by this genus are difficult to control chemically, and thus the growth of resistant cultivar
Cultivar
A cultivar'Cultivar has two meanings as explained under Formal definition. When used in reference to a taxon, the word does not apply to an individual plant but to all those plants sharing the unique characteristics that define the cultivar. is a plant or group of plants selected for desirable...
s is the main management strategy.
Other important Phytophthora diseases are:

Research beginning in the 1990s has placed some of the responsibility for European forest die-back on the activity of imported Asian Phytophthoras.

Phytophthora is sometimes referred to as a fungal-like organism but it is classified under a different kingdom altogether: Chromalveolata (formerly Stramenopila
Heterokont
The heterokonts or stramenopiles are a major line of eukaryotes currently containing more than 100,000 known species. Most are algae, ranging from the giant multicellular kelp to the unicellular diatoms, which are a primary component of plankton...
and previously Chromista
Chromista
The Chromista are a eukaryotic supergroup, probably polyphyletic, which may be treated as a separate kingdom or included among the Protista. They include all algae whose chloroplasts contain chlorophylls a and c, as well as various colorless forms that are closely related to them...
). This is a good example of convergent evolution
Convergent evolution
Convergent evolution describes the acquisition of the same biological trait in unrelated lineages.The wing is a classic example of convergent evolution in action. Although their last common ancestor did not have wings, both birds and bats do, and are capable of powered flight. The wings are...
: Phytophthora is morphologically very similar to true fungi yet its evolutionary history is quite distinct. In contrast to fungi, stramenopiles are more closely related to plants than animals. Whereas fungal cell walls are made primarily of chitin
Chitin
Chitin n is a long-chain polymer of a N-acetylglucosamine, a derivative of glucose, and is found in many places throughout the natural world...
, stramenopile cell walls are constructed mostly of cellulose
Cellulose
Cellulose is an organic compound with the formula , a polysaccharide consisting of a linear chain of several hundred to over ten thousand β linked D-glucose units....
. Ploidy levels are different between these two kingdoms as are biochemical pathways.

Phytophthoras may reproduce sexually or asexually. In many species, sexual structures have never been observed, or have only been observed in laboratory matings. In homothallic
Homothallic
Homothallic refers to the possession, within a single organism, of the resources to reproduce sexually.It can be contrasted to heterothallic.It is often used to categorize fungi. In yeast, heterothallic cells have mating types a and α...
species, sexual structures occur in single culture. Heterothallic
Heterothallic
Heterothallic species have sexes that reside in different individuals....
species have mating strains, designated as A1 and A2. When mated, antheridia
Antheridium
An antheridium or antherida is a haploid structure or organ producing and containing male gametes . It is present in the gametophyte phase of lower plants like mosses and ferns, and also in the primitive vascular psilotophytes...
introduce gametes into oogonia
Oogonium
"Oogonium" may refer to either a primordial oocyte in a female fetus or the female gametangium of certain thallophytes.-in the fetus:Oogonia are formed in large numbers by mitosis early in fetal development from primordial germ cells...
, either by the oogonium passing through the antheridium (amphigyny) or by the antheridium attaching to the proximal (lower) half of the oogonium (paragyny), and the union producing oospores. Like animals, but not like most true Fungi, meiosis is gametic, and somatic nuclei are diploid.
Asexual (mitotic) spore types are chlamydospore
Chlamydospore
A Chlamydospore is the thick-walled big resting spore of several kinds of fungi. It is the life-stage which survives in unfavourable conditions, such as dry or hot seasons....
s, and sporangia
Sporangium
A sporangium is an enclosure in which spores are formed. It can be composed of a single cell or can be multicellular. All plants, fungi, and many other lineages form sporangia at some point in their life cycle...
which produce zoospore
Zoospore
A zoospore is a motile asexual spore that uses a flagellum for locomotion. Also called a swarm spore, these spores are created by some algae, bacteria and fungi to propagate themselves.-Flagella:...
s. Chlamydospores are usually spherical and pigmented, and may have a thickened cell wall to aid in its role as a survival structure. Sporangia may be retained by the subtending hyphae (non-caducous) or be shed readily by wind or water tension (caducous) acting as dispersal structures. Also, sporangia may release zoospores, which have two unlike flagella
Flagellum
A flagellum is a tail-like projection that protrudes from the cell body of certain prokaryotic and eukaryotic cells, and plays the dual role of locomotion and sense organ, being sensitive to chemicals and temperatures outside the cell. There are some notable differences between prokaryotic and...
which they use to swim towards a host plant. 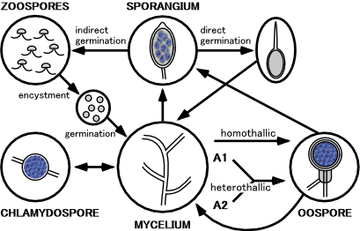 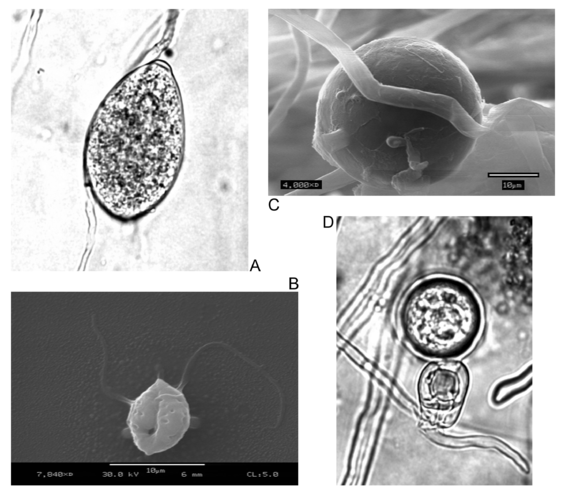