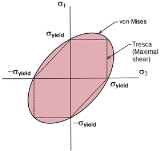 Encyclopedia
Henri Édouard Tresca was a French
France
The French Republic , The French Republic , The French Republic , (commonly known as France , is a unitary semi-presidential republic in Western Europe with several overseas territories and islands located on other continents and in the Indian, Pacific, and Atlantic oceans. Metropolitan France...
mechanical engineer, and a professor at the Conservatoire National des Arts et Métiers
Conservatoire National des Arts et Métiers
The Conservatoire National des Arts et Métiers , or National Conservatory of Arts and Crafts, is a doctoral degree-granting higher education establishment operated by the French government, dedicated to providing education and conducting research for the promotion of science and industry...
in Paris
Paris
Paris is the capital and largest city in France, situated on the river Seine, in northern France, at the heart of the Île-de-France region...
.

He is the father of the field of plasticity, or non-recoverable deformations, which he explored in an extensive series of experiments begun in 1864. He is the discoverer of the Tresca (or maximal shear stress
Shear stress
A shear stress, denoted \tau\, , is defined as the component of stress coplanar with a material cross section. Shear stress arises from the force vector component parallel to the cross section...
) criterion of material
Material
Material is anything made of matter, constituted of one or more substances. Wood, cement, hydrogen, air and water are all examples of materials. Sometimes the term "material" is used more narrowly to refer to substances or components with certain physical properties that are used as inputs to...
failure
Failure
Failure refers to the state or condition of not meeting a desirable or intended objective, and may be viewed as the opposite of success. Product failure ranges from failure to sell the product to fracture of the product, in the worst cases leading to personal injury, the province of forensic...
. The criterion specifies that a material would flow plastically if 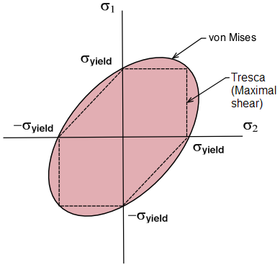 Tresca's criterion is one of two main failure criteria used today. The second important criterion is due to von Mises. See comparison on the image left:

Tresca's stature as an engineer was such that Gustave Eiffel
Gustave Eiffel
Alexandre Gustave Eiffel was a French structural engineer from the École Centrale Paris, an architect, an entrepreneur and a specialist of metallic structures...
put his name on number 3 in his list of 72 people
The 72 names on the Eiffel Tower
On the Eiffel Tower, seventy-two names of French scientists, engineers and some other notable people are engraved in recognition of their contributions. This is according to the design by Gustave Eiffel. The engravings are found on the sides of the tower under the first balcony...
making the Eiffel tower in Paris possible.
Tresca was also among the designers of the standard
Standardization
Standardization is the process of developing and implementing technical standards.The goals of standardization can be to help with independence of single suppliers , compatibility, interoperability, safety, repeatability, or quality....
metre etalon. After the Treaty of the Meter had been signed in 1875, the International Bureau of Weights and Measures (BIPM) in Sèvres, France made 28 prototype line standards of platinum-iridium. The bars had a modified X cross section named for the French scientist, Tresca who designed them. The Tresca section was designed to provide maximum stiffness. Small elliptical areas on the upper surface of the central rib at each end of the bars were highly polished, and three lines, nominally 0.5 mm apart, were ruled on these surfaces, the distance between the middle lines of each group defining the standard length. One of the bars was selected as the International Meter. The United States received National Prototype Meters No. 27 and No. 21 in 1890. When the Mendenhall Order
Mendenhall Order
The Mendenhall Order marked a decision to change the fundamental standards of length and mass of the United States from the customary standards based on those of England to metric standards. It was issued on April 5, 1893 by Thomas Corwin Mendenhall, superintendent of the U.S...
in 1893 declared the meter to be the fundamental length standard, No. 27 became the US primary national standard for all length measurements. It remained so until 1960.