Encyclopedia
Helsinki Cathedral is an Evangelical Lutheran
Evangelical Lutheran Church of Finland
The Evangelical Lutheran Church of Finland is the national church of Finland. The church professes the Lutheran branch of Christianity, and is a member of the Porvoo Communion....
cathedral
Cathedral
A cathedral is a Christian church that contains the seat of a bishop...
of the Diocese of Helsinki
Diocese of Helsinki
The Diocese of Helsinki is a Diocese of the Evangelical Lutheran Church of Finland, and the seat of the Bishop of Helsinki. Its cathedral is Helsinki Cathedral....
, located in the centre of Helsinki
Helsinki
Helsinki is the capital and largest city in Finland. It is in the region of Uusimaa, located in southern Finland, on the shore of the Gulf of Finland, an arm of the Baltic Sea. The population of the city of Helsinki is , making it by far the most populous municipality in Finland. Helsinki is...
, Finland
Finland
Finland , officially the Republic of Finland, is a Nordic country situated in the Fennoscandian region of Northern Europe. It is bordered by Sweden in the west, Norway in the north and Russia in the east, while Estonia lies to its south across the Gulf of Finland.Around 5.4 million people reside...
. The church was originally built as a tribute to the Grand Duke
Grand Duchy of Finland
The Grand Duchy of Finland was the predecessor state of modern Finland. It existed 1809–1917 as part of the Russian Empire and was ruled by the Russian czar as Grand Prince.- History :...
, Nicholas I
Nicholas I of Russia
Nicholas I , was the Emperor of Russia from 1825 until 1855, known as one of the most reactionary of the Russian monarchs. On the eve of his death, the Russian Empire reached its historical zenith spanning over 20 million square kilometers...
, the Tsar
Tsar
Tsar is a title used to designate certain European Slavic monarchs or supreme rulers. As a system of government in the Tsardom of Russia and Russian Empire, it is known as Tsarist autocracy, or Tsarism...
of Russia and until the independence of Finland in 1917, it was called St. Nicholas' Church. 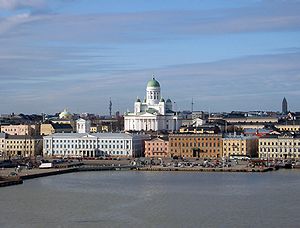 A distinct landmark in the scenery of central Helsinki, with a tall green dome
Dome
A dome is a structural element of architecture that resembles the hollow upper half of a sphere. Dome structures made of various materials have a long architectural lineage extending into prehistory....
surrounded by four smaller domes, the church was built in 1830–52, in neoclassical
Neoclassical architecture
Neoclassical architecture was an architectural style produced by the neoclassical movement that began in the mid-18th century, manifested both in its details as a reaction against the Rococo style of naturalistic ornament, and in its architectural formulas as an outgrowth of some classicizing...
style. It was designed by Carl Ludvig Engel
Carl Ludvig Engel
Carl Ludvig Engel, or Johann Carl Ludwig Engel , was a German architect known for his neoclassical style. He had a great impact on the architecture of Finland in the first part of the 19th century....
, to form the climax of the whole Senate Square
Helsinki Senate Square
The Senate Square presents Carl Ludvig Engel's architecture as a unique allegory of political, religious, scientific and commercial powers in the centre of Helsinki, Finland.-Construction:...
laid out by Engel, surrounded by a number of buildings all designed by him. The building has a Greek-cross plan (i.e. a square central mass and four arms of equal length), and is symmetrical in each of the four cardinal directions, each marked by a colonnade
Colonnade
In classical architecture, a colonnade denotes a long sequence of columns joined by their entablature, often free-standing, or part of a building....
and pediment
Pediment
A pediment is a classical architectural element consisting of the triangular section found above the horizontal structure , typically supported by columns. The gable end of the pediment is surrounded by the cornice moulding...
. Engel had intended to place a further row of columns on the west end to mark the main entrance (opposite the altar at the east end), but this was never realised. The building was later altered by his successor Ernst Lohrmann, whose four small domes make the architectural connection to the cathedral's model, Saint Isaac's Cathedral
Saint Isaac's Cathedral
Saint Isaac's Cathedral or Isaakievskiy Sobor in Saint Petersburg, Russia is the largest Russian Orthodox cathedral in the city...
in St. Petersburg, even clearer. Lohrmann also erected two separately standing bell towers and over-lifesize zinc
Zinc
Zinc , or spelter , is a metallic chemical element; it has the symbol Zn and atomic number 30. It is the first element in group 12 of the periodic table. Zinc is, in some respects, chemically similar to magnesium, because its ion is of similar size and its only common oxidation state is +2...
statues of the Twelve Apostles at apexes and corners of the roofline.

Today the cathedral is one of the most popular tourist attraction
Tourist attraction
A tourist attraction is a place of interest where tourists visit, typically for its inherent or exhibited cultural value, historical significance, natural or built beauty, or amusement opportunities....
s in Helsinki. Annually more than 350,000 people visit the church, some of them to attend religious events, but most as tourists. The church is in regular use for both worship services and special events such as weddings. The crypt was renovated in the 1980s by architects Vilhelm Helander
Vilhelm Helander
Arne Anders Vilhem Helander , is a Finnish architect and was Professor of Architecture History at Helsinki University of Technology, Espoo, Finland from 1986 until 2005, when he became Professor Emeritus....
and Juha Leiviskä
Juha Leiviskä
Juha Ilmari Leiviskä is a prominent architect from Finland.- Life and career :The son of engineer Toivo Ilmari Leiviskä and teacher Sonja Jämsén-Astala, Leiviskä studied architecture at Helsinki University of Technology, qualifying as an architect in 1963...
for use for exhibitions and church functions. Helander was also responsible for the conservation repairs to the cathedral in the late 1990s.

Before the cathedral was built, in its place a smaller church stood, called the Ulrika Eleonora Church. It was dedicated to its patroness, Ulrika Eleonora
Ulrika Eleonora of Sweden
Ulrika Eleonora or Ulrica Eleanor , also known as Ulrika Eleonora the Younger, was Queen regnant of Sweden from 5 December 1718 to 29 February 1720, and then Queen consort until her death....
, Queen of Sweden. A facsimile of this church, made entirely from snow
Snow
Snow is a form of precipitation within the Earth's atmosphere in the form of crystalline water ice, consisting of a multitude of snowflakes that fall from clouds. Since snow is composed of small ice particles, it is a granular material. It has an open and therefore soft structure, unless packed by...
, was later constructed on the Senate Square in the early 2000s. The Helsinki Old Church
Helsinki Old Church
The Old Church of Helsinki , designed by Carl Ludvig Engel and completed in 1826, is an Evangelical Lutheran church in Helsinki...
was built between 1824 and 1826 in nearby Kamppi to serve the parish during the years between the demolition of the Ulrika Eleonora Church and the consecration of the new cathedral.