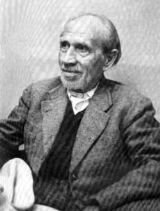 Heinrich Tessenow was a German
Germany
Germany , officially the Federal Republic of Germany , is a federal parliamentary republic in Europe. The country consists of 16 states while the capital and largest city is Berlin. Germany covers an area of 357,021 km2 and has a largely temperate seasonal climate...
architect
Architect
An architect is a person trained in the planning, design and oversight of the construction of buildings. To practice architecture means to offer or render services in connection with the design and construction of a building, or group of buildings and the space within the site surrounding the...
, professor, and urban planner
Urban planner
An urban planner or city planner is a professional who works in the field of urban planning/land use planning for the purpose of optimizing the effectiveness of a community's land use and infrastructure. They formulate plans for the development and management of urban and suburban areas, typically...
active in the Weimar era.

Tessenow is considered together with Hans Poelzig
Hans Poelzig
Hans Poelzig was a German architect, painter and set designer.-Life:Poelzig was born in Berlin in 1869 to the countess Clara Henrietta Maria Poelzig while she was married to George Acland Ames, an Englishman...
, Bruno Taut
Bruno Taut
Bruno Julius Florian Taut , was a prolific German architect, urban planner and author active during the Weimar period....
, Peter Behrens
Peter Behrens
Peter Behrens was a German architect and designer. He was important for the modernist movement, as several of the movements leading names worked for him when they were young.-Biography:Behrens attended the Christianeum Hamburg from September 1877 until Easter 1882...
, Fritz Höger, Ernst May
Ernst May
Ernst May was a German architect and city planner.May successfully applied urban design techniques to the city of Frankfurt am Main during Germany's Weimar period, and in 1930 less successfully exported those ideas to Soviet Union cities, newly created under Stalinist rule...
, Erich Mendelsohn
Erich Mendelsohn
Erich Mendelsohn was a Jewish German architect, known for his expressionist architecture in the 1920s, as well as for developing a dynamic functionalism in his projects for department stores and cinemas.-Early life:...
, Walter Gropius
Walter Gropius
Walter Adolph Georg Gropius was a German architect and founder of the Bauhaus School who, along with Ludwig Mies van der Rohe and Le Corbusier, is widely regarded as one of the pioneering masters of modern architecture....
and Mies van der Rohe one of the most important personalities of the architectural German panorama during the time of the Weimar Republic
Weimar Republic
The Weimar Republic is the name given by historians to the parliamentary republic established in 1919 in Germany to replace the imperial form of government...
.

He was born in Rostock
Rostock
Rostock -Early history:In the 11th century Polabian Slavs founded a settlement at the Warnow river called Roztoc ; the name Rostock is derived from that designation. The Danish king Valdemar I set the town aflame in 1161.Afterwards the place was settled by German traders...
, Mecklenburg-Schwerin
Mecklenburg-Schwerin
Mecklenburg-Schwerin was a duchy in northern Germany created in 1348, when Albert II of Mecklenburg and his younger brother John were raised to Dukes of Mecklenburg by King Charles IV...
. His father was a carpenter, and he studied as an apprentice before studying architecture in a building trade school in Leipzig
Leipzig
Leipzig Leipzig has always been a trade city, situated during the time of the Holy Roman Empire at the intersection of the Via Regia and Via Imperii, two important trade routes. At one time, Leipzig was one of the major European centres of learning and culture in fields such as music and publishing...
and at the Technical University of Munich
Technical University of Munich
The Technische Universität München is a research university with campuses in Munich, Garching, and Weihenstephan...
, where he later taught.

Tessenow and fellow architects Hermann Muthesius
Hermann Muthesius
Adam Gottlieb Hermann Muthesius , known as Hermann Muthesius, was a German architect, author and diplomat, perhaps best known for promoting many of the ideas of the English Arts and Crafts movement within Germany and for his subsequent influence on early pioneers of German architectural modernism...
and Richard Riemerschmid
Richard Riemerschmid
Richard Riemerschmid was a German architect, painter, designer and city planner from Munich. He was a major figure in Jugendstil, the German form of Art Nouveau, and a founder of architecture in the style...
are credited with the 1908 Gartenstadt Hellerau
Hellerau
Hellerau is a quarter in the City of Dresden, Germany. It was the first garden city in Germany.Based on the ideas of Ebenezer Howard, businessman Karl Schmidt-Hellerau founded Hellerau near Dresden in 1909. The idea was to create an organic, planned community...
, near Dresden
Dresden
Dresden is the capital city of the Free State of Saxony in Germany. It is situated in a valley on the River Elbe, near the Czech border. The Dresden conurbation is part of the Saxon Triangle metropolitan area....
, a housing project
Public housing
Public housing is a form of housing tenure in which the property is owned by a government authority, which may be central or local. Social housing is an umbrella term referring to rental housing which may be owned and managed by the state, by non-profit organizations, or by a combination of the...
that was the first tangible result of the influence of the English garden city movement
Garden city movement
The garden city movement is a method of urban planning that was initiated in 1898 by Sir Ebenezer Howard in the United Kingdom. Garden cities were intended to be planned, self-contained communities surrounded by "greenbelts" , containing proportionate areas of residences, industry and...
in Germany. This particular strain of humane, functionalist urban planning would eventually lead to the extensive German housing projects of Ernst May
Ernst May
Ernst May was a German architect and city planner.May successfully applied urban design techniques to the city of Frankfurt am Main during Germany's Weimar period, and in 1930 less successfully exported those ideas to Soviet Union cities, newly created under Stalinist rule...
and Bruno Taut
Bruno Taut
Bruno Julius Florian Taut , was a prolific German architect, urban planner and author active during the Weimar period....
in the 1920s, May's plans for Magnitogorsk
Magnitogorsk
Magnitogorsk is a mining and industrial city in Chelyabinsk Oblast, Russia, located on the eastern side of the extreme southern extent of the Ural Mountains by the Ural River. Population: 418,545 ;...
and other Russian cities, and then widespread influence through Tessenow's student Otto Koeningsberger, an urban planner who worked in Asia, Latin America, Africa and particularly India, for instance the 1948 plan for the Indian city of Bhubaneswar
Bhubaneswar
Bhubaneswar is the capital of the Indian state of Orissa, officially Odisha. The city has a long history of over 2000 years starting with Chedi dynasty who had Sisupalgarh near present-day Bhubaneswar as their capital...
.

During the next years, under the Weimar Republic
Weimar Republic
The Weimar Republic is the name given by historians to the parliamentary republic established in 1919 in Germany to replace the imperial form of government...
, Tessenow became member of the Bund Deutscher Architekten and of the Deutscher Werkbund
Deutscher Werkbund
The Deutscher Werkbund was a German association of artists, architects, designers, and industrialists. The Werkbund was to become an important event in the development of modern architecture and industrial design, particularly in the later creation of the Bauhaus school of design...
, he received a first laurea honoris causa by the University of Rostock then a second laurea honoris causa by the Technische Hochschule of Stoccarda and finally he became member of the Bund Deutscher Architekten.

Tessenow taught at the Institute of Technology
Technical University of Berlin
The Technische Universität Berlin is a research university located in Berlin, Germany. Translating the name into English is discouraged by the university, however paraphrasing as Berlin Institute of Technology is recommended by the university if necessary .The TU Berlin was founded...
in Berlin-Charlottenburg from 1926 until 1934 when he was fired by the nazist administration. Curiously Tessenow is also known through his student and one-time assistant, the Führer
Führer
Führer , alternatively spelled Fuehrer in both English and German when the umlaut is not available, is a German title meaning leader or guide now most associated with Adolf Hitler, who modelled it on Benito Mussolini's title il Duce, as well as with Georg von Schönerer, whose followers also...
architect Albert Speer
Albert Speer
Albert Speer, born Berthold Konrad Hermann Albert Speer, was a German architect who was, for a part of World War II, Minister of Armaments and War Production for the Third Reich. Speer was Adolf Hitler's chief architect before assuming ministerial office...
who became after a Ministry of the Third Reich. Tessenow taught Speer in 1925 (after Speer had been rejected from Hans Poelzig
Hans Poelzig
Hans Poelzig was a German architect, painter and set designer.-Life:Poelzig was born in Berlin in 1869 to the countess Clara Henrietta Maria Poelzig while she was married to George Acland Ames, an Englishman...
's class for bad drawing technique
Technical drawing
Technical drawing, also known as drafting or draughting, is the act and discipline of composing plans that visually communicate how something functions or has to be constructed.Drafting is the language of industry....
), and became Tessenow's assistant in 1927 at the very early age of 23. Speer's memoirs describe Tessenow's personal, discursive, informal teaching style, and his preference for architecture that expressed national culture and simplified forms. He was known for the saying, "The simplest form is not always the best, but the best is always simple."

Until the end of the World War II
World War II
World War II, or the Second World War , was a global conflict lasting from 1939 to 1945, involving most of the world's nations—including all of the great powers—eventually forming two opposing military alliances: the Allies and the Axis...
he lived retired in his country house spending most of his time to study the reconstruction of some urban centres in Pomerania and Mecklenburg regions.

After the war he was asked to teach at the University of Berlin by the soviet administration and was named Emeritus
Emeritus
Emeritus is a post-positive adjective that is used to designate a retired professor, bishop, or other professional or as a title. The female equivalent emerita is also sometimes used.-History:...
Professor in the same Institute. He spent the last years of his life on some important works never ended. 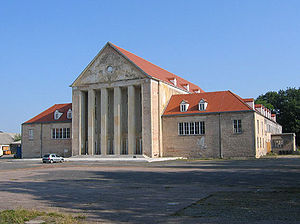 Portrayal in the media