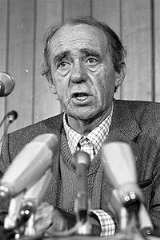 Encyclopedia
Heinrich Theodor Böll (December 21, 1917 July 16, 1985) was one of Germany
Germany
Germany , officially the Federal Republic of Germany , is a federal parliamentary republic in Europe. The country consists of 16 states while the capital and largest city is Berlin. Germany covers an area of 357,021 km2 and has a largely temperate seasonal climate...
's foremost post-World War II
World War II
World War II, or the Second World War , was a global conflict lasting from 1939 to 1945, involving most of the world's nations—including all of the great powers—eventually forming two opposing military alliances: the Allies and the Axis...
writers. Böll was awarded the Georg Büchner Prize
Georg Büchner Prize
The Georg Büchner Prize is the most important literary prize of Germany. It was created in 1923 in memory of Georg Büchner and was only given to artists who came from or were closely tied to Büchner's home of Hesse...
in 1967 and the Nobel Prize for Literature in 1972.

Böll was born in Cologne
Cologne
Cologne is Germany's fourth-largest city , and is the largest city both in the Germany Federal State of North Rhine-Westphalia and within the Rhine-Ruhr Metropolitan Area, one of the major European metropolitan areas with more than ten million inhabitants.Cologne is located on both sides of the...
, Germany, to a Catholic
Catholic
The word catholic comes from the Greek phrase , meaning "on the whole," "according to the whole" or "in general", and is a combination of the Greek words meaning "about" and meaning "whole"...
, pacifist family that later opposed the rise of Nazism
Nazism
Nazism, the common short form name of National Socialism was the ideology and practice of the Nazi Party and of Nazi Germany...
. He refused to join the Hitler Youth
Hitler Youth
The Hitler Youth was a paramilitary organization of the Nazi Party. It existed from 1922 to 1945. The HJ was the second oldest paramilitary Nazi group, founded one year after its adult counterpart, the Sturmabteilung...
during the 1930s. He was apprenticed to a bookseller before studying German at the University of Cologne
University of Cologne
The University of Cologne is one of the oldest universities in Europe and, with over 44,000 students, one of the largest universities in Germany. The university is part of the Deutsche Forschungsgemeinschaft, an association of Germany's leading research universities...
. Conscripted into the Wehrmacht
Wehrmacht
The Wehrmacht – from , to defend and , the might/power) were the unified armed forces of Nazi Germany from 1935 to 1945. It consisted of the Heer , the Kriegsmarine and the Luftwaffe .-Origin and use of the term:...
, he served in France
France
The French Republic , The French Republic , The French Republic , (commonly known as France , is a unitary semi-presidential republic in Western Europe with several overseas territories and islands located on other continents and in the Indian, Pacific, and Atlantic oceans. Metropolitan France...
, Romania
Romania
Romania is a country located at the crossroads of Central and Southeastern Europe, on the Lower Danube, within and outside the Carpathian arch, bordering on the Black Sea...
, Hungary
Hungary
Hungary , officially the Republic of Hungary , is a landlocked country in Central Europe. It is situated in the Carpathian Basin and is bordered by Slovakia to the north, Ukraine and Romania to the east, Serbia and Croatia to the south, Slovenia to the southwest and Austria to the west. The...
and the Soviet Union
Soviet Union
The Soviet Union , officially the Union of Soviet Socialist Republics , was a constitutionally socialist state that existed in Eurasia between 1922 and 1991....
, and was wounded four times before he was captured by American
United States
The United States of America is a federal constitutional republic comprising fifty states and a federal district...
s in April 1945 and sent to a prisoner-of-war camp
Prisoner-of-war camp
A prisoner-of-war camp is a site for the containment of combatants captured by their enemy in time of war, and is similar to an internment camp which is used for civilian populations. A prisoner of war is generally a soldier, sailor, or airman who is imprisoned by an enemy power during or...
.

Böll became a full-time writer at the age of 30. His first novel
Novel
A novel is a book of long narrative in literary prose. The genre has historical roots both in the fields of the medieval and early modern romance and in the tradition of the novella. The latter supplied the present generic term in the late 18th century....
, Der Zug war pünktlich (The Train Was on Time), was published in 1949. Many other novels, short stories, radio plays and essay
Essay
An essay is a piece of writing which is often written from an author's personal point of view. Essays can consist of a number of elements, including: literary criticism, political manifestos, learned arguments, observations of daily life, recollections, and reflections of the author. The definition...
collections followed, and in 1972 he received the Nobel Prize for Literature. He was the first German-born author to receive this award since Nelly Sachs
Nelly Sachs
Nelly Sachs was a Jewish German poet and playwright whose experiences resulting from the rise of the Nazis in World War II Europe transformed her into a poignant spokeswoman for the grief and yearnings of her fellow Jews...
in 1966. His work has been translated into more than 30 languages, and he is one of Germany's most widely read authors. His best-known works are Billiards at Half-past Nine
Billiards at Half-past Nine
Billiards at Half-past Nine is a novel written in 1959 by German author Heinrich Böll. The entirety of the narrative takes place on the day of September 6, 1958 but the story stretches back through the use of flashbacks and the retelling of memories of the characters...
, The Clown
The Clown (novel)
The Clown is a 1963 novel by West German writer Heinrich Böll.-Plot:Hans Schnier is the "Clown" of the novel's title. He is twenty-seven years old from a very wealthy family. At the beginning of the story he arrives in Bonn, Germany. As a clown, he had to travel across the country from city to...
, Group Portrait with Lady, The Lost Honour of Katharina Blum
The Lost Honour of Katharina Blum
The Lost Honour of Katharina Blum, or: how violence develops and where it can lead is a 1974 novel by Heinrich Böll....
, and The Safety Net, apart from many short stories.

Böll was deeply rooted in his hometown of Cologne, with its strong Roman Catholicism and its rather rough and drastic sense of humour. In the immediate post-war period, he was preoccupied with memories of the War and the effect it had—materially and psychologically—on the lives of ordinary people. He made them the heroes in his writing.

His villains are the authority figures in government, business, and in the Church, whom he castigates, sometimes humorously, sometimes acidly, for what he perceived as their conformism, lack of courage, self-satisfied attitude and abuse of power. His simple style made him a favorite for German-language textbooks.

He was deeply affected by the Nazi
Nazism
Nazism, the common short form name of National Socialism was the ideology and practice of the Nazi Party and of Nazi Germany...
takeover of Cologne, as they essentially exiled him in his own town. Furthermore, the destruction of Cologne by Allied bombing raids scarred him irrevocably. Architecturally, the newly-rebuilt Cologne, prosperous once more, left him indifferent. (Böll seemed to be a pupil of William Morris
William Morris
William Morris 24 March 18343 October 1896 was an English textile designer, artist, writer, and socialist associated with the Pre-Raphaelite Brotherhood and the English Arts and Crafts Movement...
- he made known that he would have preferred Cologne cathedral
Cologne Cathedral
Cologne Cathedral is a Roman Catholic church in Cologne, Germany. It is the seat of the Archbishop of Cologne and the administration of the Archdiocese of Cologne. It is renowned monument of German Catholicism and Gothic architecture and is a World Heritage Site...
unfinished, with the 14th-century wooden crane on top of it, as it stood in 1848). Throughout his life he maintained many relationships with the citizens of Cologne, rich and poor. When he was in hospital, the nurses often complained about the "low-life" people who came to see their friend Heinrich Böll.

His works have been dubbed "Trümmerliteratur
Trümmerliteratur
Trümmerliteratur , also called Kahlschlagliteratur , is a literary movement that began shortly after World War II in Germany and lasted until about 1950....
"—the literature of the rubble. This is fitting in that typical postwar German usage of "rubble" implicitly refers to the rubble of World War II air-raid damage which gradually diminished over two decades as West Germany emerged from said "rubble". He was a leader of the German writers who tried to come to grips with the memory of the War
World War II
World War II, or the Second World War , was a global conflict lasting from 1939 to 1945, involving most of the world's nations—including all of the great powers—eventually forming two opposing military alliances: the Allies and the Axis...
, the Nazis, and the Holocaust—and the guilt that came with them. He and his wife lived in Cologne and the Eifel region
Eifel
The Eifel is a low mountain range in western Germany and eastern Belgium. It occupies parts of southwestern North Rhine-Westphalia, northwestern Rhineland-Palatinate and the south of the German-speaking Community of Belgium....
. However, he also spent time on Achill Island
Achill Island
Achill Island in County Mayo is the largest island off the coast of Ireland, and is situated off the west coast. It has a population of 2,700. Its area is . Achill is attached to the mainland by Michael Davitt Bridge, between the villages of Gob an Choire and Poll Raithní . A bridge was first...
off the west coast of Ireland
Republic of Ireland
Ireland , described as the Republic of Ireland , is a sovereign state in Europe occupying approximately five-sixths of the island of the same name. Its capital is Dublin. Ireland, which had a population of 4.58 million in 2011, is a constitutional republic governed as a parliamentary democracy,...
. His cottage there is now used as a guesthouse for international and Irish artists. He recorded some of his experiences in Ireland in his book 'Irish Journal'.

He was a president of the then West German P.E.N. and subsequently the International P.E.N. organizations. He travelled frequently as a representative of the new, democratic Germany. His appearance and attitude were in complete contrast to the boastful, aggressive type of German which had become infamous all over the world during Hitler's reign. Böll was particularly successful in Eastern Europe
Eastern Europe
Eastern Europe is the eastern part of Europe. The term has widely disparate geopolitical, geographical, cultural and socioeconomic readings, which makes it highly context-dependent and even volatile, and there are "almost as many definitions of Eastern Europe as there are scholars of the region"...
, as he seemed to portray the dark side of capitalism
Capitalism
Capitalism is an economic system that became dominant in the Western world following the demise of feudalism. There is no consensus on the precise definition nor on how the term should be used as a historical category...
in his books. He sold millions of copies in the Soviet Union
Soviet Union
The Soviet Union , officially the Union of Soviet Socialist Republics , was a constitutionally socialist state that existed in Eurasia between 1922 and 1991....
alone. When Aleksandr Solzhenitsyn
Aleksandr Solzhenitsyn
Aleksandr Isayevich Solzhenitsyn was aRussian and Soviet novelist, dramatist, and historian. Through his often-suppressed writings, he helped to raise global awareness of the Gulag, the Soviet Union's forced labor camp system – particularly in The Gulag Archipelago and One Day in the Life of...
was expelled from the Soviet Union, he first took refuge in Heinrich Böll's Eifel cottage. In 1976, Böll demonstratively left the Catholic church, "without falling away from the faith".