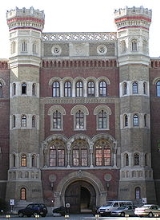 The museum is located in Vienna's Arsenal
Arsenal (Vienna)
The Arsenal is a former military complex of buildings in the south-east of Vienna in the third district.Several brick buildings in a rectangle layout make up the complex which is located on a bank south of the Landstraßer Gürtel...
, in the Landstraße
Landstraße
Landstraße is the 3rd municipal District of Vienna, Austria] . It is near the center of Vienna and was established in the 19th century. Landstraße is a heavily populated urban area with many workers and residential homes. It has inhabitants in an area of 7.42 km². It has existed since...
district, not far from the Belvedere palace
Belvedere (palace)
The Belvedere is a historical building complex in Vienna, Austria, consisting of two Baroque palaces the Upper and Lower Belvedere, the Orangery, and the Palace Stables. The buildings are set in a Baroque park landscape in the 3rd district of the city, south-east of its centre. It houses the...
. It was constructed between 1850 and 1856 at the behest of Emperor Franz Joseph I as the new city garrison
Garrison
Garrison is the collective term for a body of troops stationed in a particular location, originally to guard it, but now often simply using it as a home base....
, after the old one was destroyed in the 1848 revolution. The museum, at the Arsenal's center, was part of the original design and was to serve as both a historical museum and a shrine to the Empire's military victories and leaders. (According to the Museum's official website, it is the oldest museum in Vienna.) It consists of five major parts: a main entrance hall containing the tomb-like Hall of Generals, and four large exhibit halls, in which the collections are kept. The bronze cannon are arranged outside the museum, on the Arsenal grounds.

Each of the four exhibit halls is devoted to a segment of Austrian history, beginning with the Thirty Years' War
Thirty Years' War
The Thirty Years' War was fought primarily in what is now Germany, and at various points involved most countries in Europe. It was one of the most destructive conflicts in European history....
and the Ottoman Turks
Ottoman Turks
The Ottoman Turks were the Turkish-speaking population of the Ottoman Empire who formed the base of the state's military and ruling classes. Reliable information about the early history of Ottoman Turks is scarce, but they take their Turkish name, Osmanlı , from the house of Osman I The Ottoman...
, continuing through the Napoleonic Wars
Napoleonic Wars
The Napoleonic Wars were a series of wars declared against Napoleon's French Empire by opposing coalitions that ran from 1803 to 1815. As a continuation of the wars sparked by the French Revolution of 1789, they revolutionised European armies and played out on an unprecedented scale, mainly due to...
, World War I
World War I
World War I , which was predominantly called the World War or the Great War from its occurrence until 1939, and the First World War or World War I thereafter, was a major war centred in Europe that began on 28 July 1914 and lasted until 11 November 1918...
, and World War II
World War II
World War II, or the Second World War , was a global conflict lasting from 1939 to 1945, involving most of the world's nations—including all of the great powers—eventually forming two opposing military alliances: the Allies and the Axis...
. There is also a small special exhibition hall where the contents are changed regularly. One of the most notable parts of the Museum's collection is located in the World War I hall, and pertains to the assassination of the Archduke Francis Ferdinand. On display are the automobile in which the Archduke and his wife were riding when they were assassinated, the uniform he was wearing, the pistol he was shot by, and the chaise longue on which he was declared dead.

Other notable exhibits include the medieval giant bombard Pumhart von Steyr
Pumhart von Steyr
The Pumhart von Steyr is a medieval supergun from Styria, Austria, and the largest known wrought-iron bombard by caliber. The cannon was produced in the early 15th century and could fire, according to modern calculations, a 690 kg stone ball around 600 m, loaded with 15 kg of powder and set up at...
, the original shipbuilder's model of the battleship
Battleship
A battleship is a large armored warship with a main battery consisting of heavy caliber guns. Battleships were larger, better armed and armored than cruisers and destroyers. As the largest armed ships in a fleet, battleships were used to attain command of the sea and represented the apex of a...
SMS Viribus Unitis
SMS Viribus Unitis
SMS Viribus Unitis was the first Austro-Hungarian dreadnought battleship of the . Its name, meaning "With United Forces", was the personal motto of Emperor Franz Joseph I.Viribus Unitis was ordered by the Austro-Hungarian navy in 1908...
, flagship of the Austro-Hungarian naval fleet during World War I, the MiG-21
Mikoyan-Gurevich MiG-21
The Mikoyan-Gurevich MiG-21 is a supersonic jet fighter aircraft, designed by the Mikoyan-Gurevich Design Bureau in the Soviet Union. It was popularly nicknamed "balalaika", from the aircraft's planform-view resemblance to the Russian stringed musical instrument or ołówek by Polish pilots due to...
of Croatian
Croats
Croats are a South Slavic ethnic group mostly living in Croatia, Bosnia and Herzegovina and nearby countries. There are around 4 million Croats living inside Croatia and up to 4.5 million throughout the rest of the world. Responding to political, social and economic pressure, many Croats have...
pilot Rudolf Perešin
Rudolf Perešin
Rudolf Perešin , a Croatian fighter pilot in the Yugoslav People's Army , defected from Željava Air Base to Klagenfurt, Austria in 1991, during a reconnaissance flight because he wanted to help his homeland Croatia during the Croatian War of Independence. He was the first pilot to desert from the JNA...
,who deserted JNA, the French observation balloon and oldest preserved European aircraft L'Intrépide
L'Intrépide
L'Intrépide was a hydrogen balloon of the French Aerostatic Corps and is the oldest preserved aircraft in Europe.L'Intrépide was the larger of two observation balloons, the other being Hercule , issued to the Aerostatic Corps in June 1795...
, and the remains of SM U-20
SM U-20 (Austria-Hungary)
SM U-20 or U-XX was the lead boat of the of submarines or U-boats built for and operated by the Austro-Hungarian Navy during the First World War...
, an Austro-Hungarian Navy
Austro-Hungarian Navy
The Austro-Hungarian Navy was the naval force of Austria-Hungary. Its official name in German was Kaiserliche und Königliche Kriegsmarine , abbreviated as k.u.k. Kriegsmarine....
submarine
Submarine
A submarine is a watercraft capable of independent operation below the surface of the water. It differs from a submersible, which has more limited underwater capability...
sunk in combat in 1918.