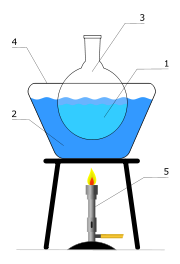 A heated bath is used in the laboratory
Laboratory
A laboratory is a facility that provides controlled conditions in which scientific research, experiments, and measurement may be performed. The title of laboratory is also used for certain other facilities where the processes or equipment used are similar to those in scientific laboratories...
to allow a chemical reaction
Chemical reaction
A chemical reaction is a process that leads to the transformation of one set of chemical substances to another. Chemical reactions can be either spontaneous, requiring no input of energy, or non-spontaneous, typically following the input of some type of energy, such as heat, light or electricity...
to occur at an elevated temperature.

The heated bath is a fluid placed in an open (metal) pot. Water
Water
Water is a chemical substance with the chemical formula H2O. A water molecule contains one oxygen and two hydrogen atoms connected by covalent bonds. Water is a liquid at ambient conditions, but it often co-exists on Earth with its solid state, ice, and gaseous state . Water also exists in a...
and silicone oil
Silicone oil
A silicone oil is any polymerized siloxanes with organic side chains. They are formed of alternating silicon-oxygen atoms or siloxane, rather than carbon atoms . Other species attach to the tetravalent silicon atoms, not to the divalent oxygen atoms which are fully committed to forming the...
are the most commonly used fluids. A water bath
Water bath
A water bath can refer to:* A Bain-marie* A heated bath* A Laboratory water bath...
is used for temperatures up to 100 °C. An oil bath
Oil bath
An oil bath is a laboratory heating device which uses boiling oil as the temperature regulator. Since different oils have different boiling points it is possible to obtain a temperature near to the desired temperature by selecting an oil with a boiling point as close as possible to the desired...
is employed for temperatures over 100 °C.

The heated bath is heated on a hot plate
Hot plate
A hot plate is a portable self-contained tabletop small appliance that features one, two or more gas burners or electric heating elements. A hot plate can be used as a stand alone appliance, but is often used as a substitute for one of the burners from an oven range or the cook top of a stove...
, or with a bunsen burner
Bunsen burner
A Bunsen burner, named after Robert Bunsen, is a common piece of laboratory equipment that produces a single open gas flame, which is used for heating, sterilization, and combustion.- Operation:...
. The reaction chamber (florence flask
Florence flask
A Florence flask is a type of flask used as an item of laboratory glassware. It can be used as a container to hold solutions of chemicals. A Florence flask has a round body with a single long neck and with either a round or a flat bottom...
, erlenmeyer flask
Erlenmeyer flask
An Erlenmeyer flask, also known as a conical flask, is a widely used type of laboratory flask which features a flat bottom, a conical body, and a cylindrical neck. It is named after the German chemist Emil Erlenmeyer, who created it in 1861...
, beaker
Beaker (glassware)
A beaker is a simple container for stirring, mixing and heating liquids commonly used in many laboratories. Beakers are generally cylindrical in shape, with a flat bottom. Most also have a small spout to aid pouring as shown in the picture...
) is immersed in the heated bath. A thermometer
Thermometer
Developed during the 16th and 17th centuries, a thermometer is a device that measures temperature or temperature gradient using a variety of different principles. A thermometer has two important elements: the temperature sensor Developed during the 16th and 17th centuries, a thermometer (from the...
is usually kept in the fluid to monitor the temperature.
The source of this article is wikipedia, the free encyclopedia.  The text of this article is licensed under the GFDL.