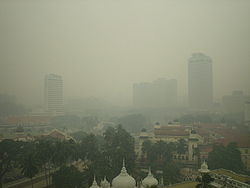 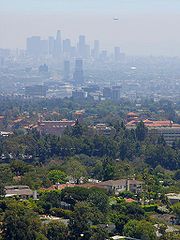 Haze is traditionally an atmospheric
Earth's atmosphere
The atmosphere of Earth is a layer of gases surrounding the planet Earth that is retained by Earth's gravity. The atmosphere protects life on Earth by absorbing ultraviolet solar radiation, warming the surface through heat retention , and reducing temperature extremes between day and night...
phenomenon where dust, smoke and other dry particles obscure the clarity of the sky. The World Meteorological Organization
World Meteorological Organization
The World Meteorological Organization is an intergovernmental organization with a membership of 189 Member States and Territories. It originated from the International Meteorological Organization , which was founded in 1873...
manual of codes includes a classification of horizontal obscuration into categories of fog
Fog
Fog is a collection of water droplets or ice crystals suspended in the air at or near the Earth's surface. While fog is a type of stratus cloud, the term "fog" is typically distinguished from the more generic term "cloud" in that fog is low-lying, and the moisture in the fog is often generated...
, ice fog
Ice fog
Ice fog is a type of fog consisting of fine ice crystals suspended in the air. It can happen only in cold areas of the world since water can remain liquid down to -40 °C...
, steam fog, mist
Mist
Mist is a phenomenon of small droplets suspended in air. It can occur as part of natural weather or volcanic activity, and is common in cold air above warmer water, in exhaled air in the cold, and in a steam room of a sauna. It can also be created artificially with aerosol canisters if the...
, haze, smoke
Smoke
Smoke is a collection of airborne solid and liquid particulates and gases emitted when a material undergoes combustion or pyrolysis, together with the quantity of air that is entrained or otherwise mixed into the mass. It is commonly an unwanted by-product of fires , but may also be used for pest...
, volcanic ash
Vog
Vog is a form of air pollution that results when sulfur dioxide and other gases and particles emitted by an erupting volcano react with oxygen and moisture in the presence of sunlight. The word is a portmanteau of the words "volcanic" and "smog"...
, dust
Dust
Dust consists of particles in the atmosphere that arise from various sources such as soil dust lifted up by wind , volcanic eruptions, and pollution...
, sand
Sand
Sand is a naturally occurring granular material composed of finely divided rock and mineral particles.The composition of sand is highly variable, depending on the local rock sources and conditions, but the most common constituent of sand in inland continental settings and non-tropical coastal...
and snow
Snow
Snow is a form of precipitation within the Earth's atmosphere in the form of crystalline water ice, consisting of a multitude of snowflakes that fall from clouds. Since snow is composed of small ice particles, it is a granular material. It has an open and therefore soft structure, unless packed by...
.
Sources for haze particles include farming (ploughing in dry weather), traffic, industry, and wildfire
Wildfire
A wildfire is any uncontrolled fire in combustible vegetation that occurs in the countryside or a wilderness area. Other names such as brush fire, bushfire, forest fire, desert fire, grass fire, hill fire, squirrel fire, vegetation fire, veldfire, and wilkjjofire may be used to describe the same...
s.

Seen from afar (e.g. approaching airplane) and depending upon the direction of view with respect to the sun, haze may appear brownish or bluish, while mist tends to be bluish-grey. Whereas haze often is thought of as a phenomenon of dry air, mist formation is a phenomenon of humid air. However, haze particles may act as condensation nuclei for the subsequent formation of mist droplets; such forms of haze are known as "wet haze."

In the United States and elsewhere, the term "haze" in meteorological literature generally is used to denote visibility-reducing aerosols of the wet type. Such aerosols commonly arise from complex chemical reactions that occur as sulfur dioxide
Sulfur dioxide
Sulfur dioxide is the chemical compound with the formula . It is released by volcanoes and in various industrial processes. Since coal and petroleum often contain sulfur compounds, their combustion generates sulfur dioxide unless the sulfur compounds are removed before burning the fuel...
gases emitted during combustion are converted into small droplets of sulfuric acid. The reactions are enhanced in the presence of sunlight, high relative humidity, and stagnant air flow. A small component of wet haze aerosols appear to be derived from compounds released by trees, such as terpenes. For all these reasons, wet haze tends to be primarily a warm-season phenomenon. Large areas of haze covering many thousands of kilometers may be produced under favorable conditions each summer.

Haze often occurs when dust and smoke particles accumulate in relatively dry air. When weather conditions block the dispersal of smoke and other pollutants they concentrate and form a usually low-hanging shroud that impairs visibility
Visibility
In meteorology, visibility is a measure of the distance at which an object or light can be clearly discerned. It is reported within surface weather observations and METAR code either in meters or statute miles, depending upon the country. Visibility affects all forms of traffic: roads, sailing...
and may become a respiratory
Respiration (physiology)
'In physiology, respiration is defined as the transport of oxygen from the outside air to the cells within tissues, and the transport of carbon dioxide in the opposite direction...
health
Health
Health is the level of functional or metabolic efficiency of a living being. In humans, it is the general condition of a person's mind, body and spirit, usually meaning to be free from illness, injury or pain...
threat. Industrial pollution can result in dense haze, which is known as smog
Smog
Smog is a type of air pollution; the word "smog" is a portmanteau of smoke and fog. Modern smog is a type of air pollution derived from vehicular emission from internal combustion engines and industrial fumes that react in the atmosphere with sunlight to form secondary pollutants that also combine...
.

In the United States, the Interagency Monitoring of Protected Visual Environments
(IMPROVE) program was developed as a collaborative effort between the US EPA and the National Park Service in order to establish the chemical composition of haze in National Parks and establish air pollution control measures in order to restore the visibility to pre-industrial levels. Additionally, the Clean Air Act requires that any current visibility problems be remedied, and future visibility problems be prevented, in 156 Class I Federal areas located throughout the United States. A full list of these areas is available on EPA's website.

Haze causes issues in the area of terrestrial photography, where the penetration of large amounts of dense atmosphere may be necessary to image distant subjects. This results in the visual effect of a loss of contrast
Contrast (vision)
Contrast is the difference in visual properties that makes an object distinguishable from other objects and the background. In visual perception of the real world, contrast is determined by the difference in the color and brightness of the object and other objects within the same field of view...
in the subject, due to the effect of light scattering
Scattering
Scattering is a general physical process where some forms of radiation, such as light, sound, or moving particles, are forced to deviate from a straight trajectory by one or more localized non-uniformities in the medium through which they pass. In conventional use, this also includes deviation of...
through the haze particles. For these reasons, sunrise and sunset colors appear subdued on hazy days, and stars may be obscured at night. In some cases, attenuation by haze is so great that, toward sunset, the sun disappears altogether before reaching the horizon. (see example). Haze can be defined as an aerial form of the Tyndall effect
Tyndall effect
The Tyndall effect, also known as Tyndall scattering, is light scattering by particles in a colloid or particles in a fine suspension. It is named after the 19th century physicist John Tyndall. It is similar to Rayleigh scattering, in that the intensity of the scattered light depends on the fourth...
therefore unlike other atmospheric effects such as cloud and fog, haze is spectrally selective: shorter (blue) wavelengths are scattered more, and longer (red/infrared
Infrared
Infrared light is electromagnetic radiation with a wavelength longer than that of visible light, measured from the nominal edge of visible red light at 0.74 micrometres , and extending conventionally to 300 µm...
) wavelengths are scattered less. For this reason many super-telephoto lenses often incorporate yellow filters
Filter (optics)
Optical filters are devices which selectively transmit light of different wavelengths, usually implemented as plane glass or plastic devices in the optical path which are either dyed in the mass or have interference coatings....
or coatings to enhance image contrast.

Infrared (IR) imaging may also be used to penetrate haze over long distances, with a combination of IR-pass optical filters (such as the Wratten 89B
Wratten number
Wratten numbers are a labeling system for optical filters, usually for photographic use comprising a number sometimes followed by a letter. The number denotes the color of the filter, but is arbitrary and does not encode any information ; letters increase with increasing strength.They are named for...
) and IR-sensitive detector.