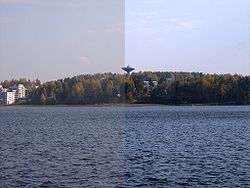 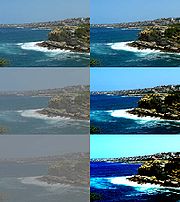 Contrast is the difference in visual properties that makes an object (or its representation in an image) distinguishable from other objects and the background. In visual perception
Visual perception
Visual perception is the ability to interpret information and surroundings from the effects of visible light reaching the eye. The resulting perception is also known as eyesight, sight, or vision...
of the real world, contrast is determined by the difference in the color
Color
Color or colour is the visual perceptual property corresponding in humans to the categories called red, green, blue and others. Color derives from the spectrum of light interacting in the eye with the spectral sensitivities of the light receptors...
and brightness
Brightness
Brightness is an attribute of visual perception in which a source appears to be radiating or reflecting light. In other words, brightness is the perception elicited by the luminance of a visual target...
of the object and other objects within the same field of view
Field of view
The field of view is the extent of the observable world that is seen at any given moment....
. Because the human visual system is more sensitive to contrast than absolute luminance
Luminance
Luminance is a photometric measure of the luminous intensity per unit area of light travelling in a given direction. It describes the amount of light that passes through or is emitted from a particular area, and falls within a given solid angle. The SI unit for luminance is candela per square...
, we can perceive the world similarly regardless of the huge changes in illumination over the day or from place to place.

The high-frequency cut-off represents the optical
Optics
Optics is the branch of physics which involves the behavior and properties of light, including its interactions with matter and the construction of instruments that use or detect it. Optics usually describes the behavior of visible, ultraviolet, and infrared light...
limitations of the visual system's ability to resolve
Optical resolution
Optical resolution describes the ability of an imaging system to resolve detail in the object that is being imaged.An imaging system may have many individual components including a lens and recording and display components...
detail and is typically about 60 cycles per degree. The high-frequency cut-off is related to the packing density of the retina
Retina
The vertebrate retina is a light-sensitive tissue lining the inner surface of the eye. The optics of the eye create an image of the visual world on the retina, which serves much the same function as the film in a camera. Light striking the retina initiates a cascade of chemical and electrical...
l photoreceptor cells: a finer matrix can resolve finer gratings. 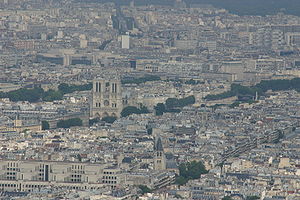 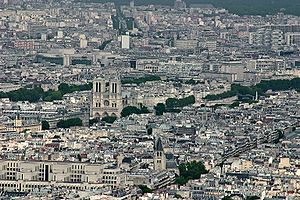 There are many possible definitions of contrast. Some include color; others do not. Travnikova laments, "Such a multiplicity of notions of contrast is extremely inconvenient. It complicates the solution of many applied problems and makes it difficult to compare the results published by different authors."

Various definitions of contrast are used in different situations. Here, luminance
Luminance
Luminance is a photometric measure of the luminous intensity per unit area of light travelling in a given direction. It describes the amount of light that passes through or is emitted from a particular area, and falls within a given solid angle. The SI unit for luminance is candela per square...
contrast is used as an example, but the formulas can also be applied to other physical quantities. In many cases, the definitions of contrast represent a ratio of the type

The Weber contrast is defined as

representing the highest and lowest luminance. The denominator represents twice the average of the luminance.

Root mean square
Root mean square
In mathematics, the root mean square , also known as the quadratic mean, is a statistical measure of the magnitude of a varying quantity. It is especially useful when variates are positive and negative, e.g., sinusoids...
(RMS) contrast does not depend on the spatial frequency content or the spatial distribution of contrast in the image. RMS contrast is defined as the standard deviation of the pixel
Pixel
In digital imaging, a pixel, or pel, is a single point in a raster image, or the smallest addressable screen element in a display device; it is the smallest unit of picture that can be represented or controlled....
intensities:

-th element of the two dimensional image of size

is the average intensity of all pixel values in the image. The image

is assumed to have its pixel intensities normalized in the range

Contrast sensitivity is a measure of the ability to discern between luminance
Luminance
Luminance is a photometric measure of the luminous intensity per unit area of light travelling in a given direction. It describes the amount of light that passes through or is emitted from a particular area, and falls within a given solid angle. The SI unit for luminance is candela per square...
s of different levels in a static image
Image
An image is an artifact, for example a two-dimensional picture, that has a similar appearance to some subject—usually a physical object or a person.-Characteristics:...
. Contrast sensitivity varies between individuals, reaching a maximum at approximately 20 years of age, and at spatial frequencies
Spatial frequency
In mathematics, physics, and engineering, spatial frequency is a characteristic of any structure that is periodic across position in space. The spatial frequency is a measure of how often sinusoidal components of the structure repeat per unit of distance. The SI unit of spatial frequency is...
of about 2–5 cycles/degree. In addition it can decline with age and also due to other factors such as cataracts and diabetic retinopathy. 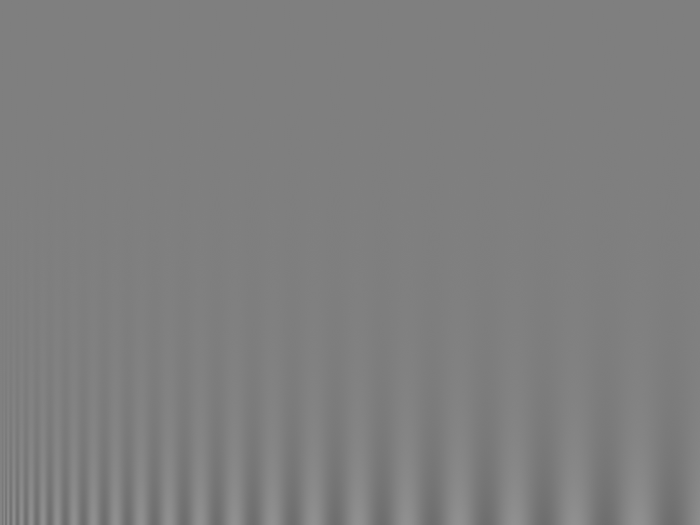