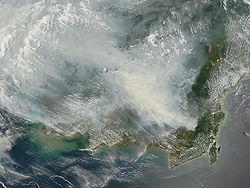 The ASEAN Agreement on Transboundary Haze Pollution is an environmental agreement
Environmental agreement
This is a list of international environmental agreements. Most of the following agreements are legally binding.-Alphabetical order:*Aarhus Convention Convention on Access to Information, Public Participation in Decision-making and Access to Justice in Environmental Matters, Aarhus, 1998*Alpine...
signed in 2002 between all ASEAN nations to reduce haze
Haze
Haze is traditionally an atmospheric phenomenon where dust, smoke and other dry particles obscure the clarity of the sky. The World Meteorological Organization manual of codes includes a classification of horizontal obscuration into categories of fog, ice fog, steam fog, mist, haze, smoke, volcanic...
pollution
Pollution
Pollution is the introduction of contaminants into a natural environment that causes instability, disorder, harm or discomfort to the ecosystem i.e. physical systems or living organisms. Pollution can take the form of chemical substances or energy, such as noise, heat or light...
in Southeast Asia
Southeast Asia
Southeast Asia, South-East Asia, South East Asia or Southeastern Asia is a subregion of Asia, consisting of the countries that are geographically south of China, east of India, west of New Guinea and north of Australia. The region lies on the intersection of geological plates, with heavy seismic...

The agreement is a reaction to an environmental crisis that hit Southeast Asia in the late 1990s. The crisis was mainly caused by land clearing via open burning in the Indonesia
Indonesia
Indonesia , officially the Republic of Indonesia , is a country in Southeast Asia and Oceania. Indonesia is an archipelago comprising approximately 13,000 islands. It has 33 provinces with over 238 million people, and is the world's fourth most populous country. Indonesia is a republic, with an...
n island of Sumatra
Sumatra
Sumatra is an island in western Indonesia, westernmost of the Sunda Islands. It is the largest island entirely in Indonesia , and the sixth largest island in the world at 473,481 km2 with a population of 50,365,538...
. Satellite images confirmed the presence of hot spots throughout Borneo
Borneo
Borneo is the third largest island in the world and is located north of Java Island, Indonesia, at the geographic centre of Maritime Southeast Asia....
, Sumatra, the Malay Peninsula
Malay Peninsula
The Malay Peninsula or Thai-Malay Peninsula is a peninsula in Southeast Asia. The land mass runs approximately north-south and, at its terminus, is the southern-most point of the Asian mainland...
and several other places. Malaysia, Singapore
Singapore
Singapore , officially the Republic of Singapore, is a Southeast Asian city-state off the southern tip of the Malay Peninsula, north of the equator. An island country made up of 63 islands, it is separated from Malaysia by the Straits of Johor to its north and from Indonesia's Riau Islands by the...
and to a certain extent, Thailand
Thailand
Thailand , officially the Kingdom of Thailand , formerly known as Siam , is a country located at the centre of the Indochina peninsula and Southeast Asia. It is bordered to the north by Burma and Laos, to the east by Laos and Cambodia, to the south by the Gulf of Thailand and Malaysia, and to the...
and Brunei
Brunei
Brunei , officially the State of Brunei Darussalam or the Nation of Brunei, the Abode of Peace , is a sovereign state located on the north coast of the island of Borneo, in Southeast Asia...
were particularly badly affected.

From Sumatra, monsoon
Monsoon
Monsoon is traditionally defined as a seasonal reversing wind accompanied by corresponding changes in precipitation, but is now used to describe seasonal changes in atmospheric circulation and precipitation associated with the asymmetric heating of land and sea...
winds blew the smoke eastward and hence creating negative environmental effects (externalities
Externality
In economics, an externality is a cost or benefit, not transmitted through prices, incurred by a party who did not agree to the action causing the cost or benefit...
) on other Southeast Asian nations. Thick haze covered much of Southeast Asia for weeks and caused noticeable and widespread human health problems.

As of June 2007, eight countries have ratified
Ratification
Ratification is a principal's approval of an act of its agent where the agent lacked authority to legally bind the principal. The term applies to private contract law, international treaties, and constitutionals in federations such as the United States and Canada.- Private law :In contract law, the...
the agreement.


Parties to the Agreement