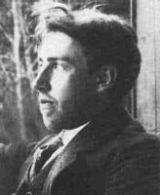 Encyclopedia
Harald August Bohr (22 April 1887 – 22 January 1951) was a Danish
Denmark
Denmark is a Scandinavian country in Northern Europe. The countries of Denmark and Greenland, as well as the Faroe Islands, constitute the Kingdom of Denmark . It is the southernmost of the Nordic countries, southwest of Sweden and south of Norway, and bordered to the south by Germany. Denmark...
mathematician
Mathematician
A mathematician is a person whose primary area of study is the field of mathematics. Mathematicians are concerned with quantity, structure, space, and change....
and football
Football (soccer)
Association football, more commonly known as football or soccer, is a sport played between two teams of eleven players with a spherical ball...
player. After receiving his doctorate in 1910, Bohr became an eminent mathematician, founding the field of almost periodic function
Almost periodic function
In mathematics, an almost periodic function is, loosely speaking, a function of a real number that is periodic to within any desired level of accuracy, given suitably long, well-distributed "almost-periods". The concept was first studied by Harald Bohr and later generalized by Vyacheslav Stepanov,...
s. His brother was the Nobel Prize
Nobel Prize
The Nobel Prizes are annual international awards bestowed by Scandinavian committees in recognition of cultural and scientific advances. The will of the Swedish chemist Alfred Nobel, the inventor of dynamite, established the prizes in 1895...
-winning physicist Niels Bohr
Niels Bohr
Niels Henrik David Bohr was a Danish physicist who made foundational contributions to understanding atomic structure and quantum mechanics, for which he received the Nobel Prize in Physics in 1922. Bohr mentored and collaborated with many of the top physicists of the century at his institute in...
. As a student, his footballing skill meant he was called up to the Danish national team
Denmark national football team
The Denmark national football team represents Denmark in association football and is controlled by the Danish Football Association , the governing body for the football clubs which are organized under DBU...
for the 1908 Summer Olympics
1908 Summer Olympics
The 1908 Summer Olympics, officially the Games of the IV Olympiad, were an international multi-sport event which was held in 1908 in London, England, United Kingdom. These games were originally scheduled to be held in Rome. At the time they were the fifth modern Olympic games...
, where he won a silver medal.

Bohr was Jewish, and was born in 1887 to Christian Bohr
Christian Bohr
Christian Harald Lauritz Peter Emil Bohr was a Danish physician, father of the physicist and Nobel laureate Niels Bohr, as well as the mathematician Harald Bohr and grandfather of another physicist and nobel laureate Aage Bohr...
, a professor of physiology, and Ellen Adler Bohr, a woman from a wealthy Jewish family of local renown. Harald had a close relationship with his elder brother, which The Times
The Times
The Times is a British daily national newspaper, first published in London in 1785 under the title The Daily Universal Register . The Times and its sister paper The Sunday Times are published by Times Newspapers Limited, a subsidiary since 1981 of News International...
likened to that between Captain Cuttle and Captain Bunsby in Charles Dickens
Charles Dickens
Charles John Huffam Dickens was an English novelist, generally considered the greatest of the Victorian period. Dickens enjoyed a wider popularity and fame than had any previous author during his lifetime, and he remains popular, having been responsible for some of English literature's most iconic...
' Dombey and Son
Dombey and Son
Dombey and Son is a novel by the Victorian author Charles Dickens. It was first published in monthly parts between October 1846 and April 1848 with the full title Dealings with the Firm of Dombey and Son: Wholesale, Retail and for Exportation...
.

Like his father and brother before him, in 1904 Bohr enrolled at the University of Copenhagen
University of Copenhagen
The University of Copenhagen is the oldest and largest university and research institution in Denmark. Founded in 1479, it has more than 37,000 students, the majority of whom are female , and more than 7,000 employees. The university has several campuses located in and around Copenhagen, with the...
, where he studied mathematics, obtaining his masters in 1909 and his doctorate a year later. Among his tutors were Hieronymus Georg Zeuthen
Hieronymus Georg Zeuthen
Hieronymus Georg Zeuthen was a Danish mathematician.He is known for work on the enumerative geometry of conic sections, algebraic surfaces, and history of mathematics.-Biography:...
and Thorvald N. Thiele
Thorvald N. Thiele
Thorvald Nicolai Thiele was a Danish astronomer, actuary and mathematician, most notable for his work in statistics, interpolation and the three-body problem. He was the first to propose a mathematical theory of Brownian motion...
. Bohr worked in mathematical analysis; much of his early work was devoted to Dirichlet series including his doctorate, which was entitled Bidrag til de Dirichletske Rækkers Theori (Contributions to the Theory of Dirichlet Series). A collaboration with Göttingen
Göttingen
Göttingen is a university town in Lower Saxony, Germany. It is the capital of the district of Göttingen. The Leine river runs through the town. In 2006 the population was 129,686.-General information:...
-based Edmund Landau
Edmund Landau
Edmund Georg Hermann Landau was a German Jewish mathematician who worked in the fields of number theory and complex analysis.-Biography:...
resulted in the Bohr–Landau theorem, regarding the distribution of zeroes in zeta functions.

Bohr worked in mathematical analysis
Mathematical analysis
Mathematical analysis, which mathematicians refer to simply as analysis, has its beginnings in the rigorous formulation of infinitesimal calculus. It is a branch of pure mathematics that includes the theories of differentiation, integration and measure, limits, infinite series, and analytic functions...
, founding the field of almost periodic function
Almost periodic function
In mathematics, an almost periodic function is, loosely speaking, a function of a real number that is periodic to within any desired level of accuracy, given suitably long, well-distributed "almost-periods". The concept was first studied by Harald Bohr and later generalized by Vyacheslav Stepanov,...
s, and worked with the Cambridge
University of Cambridge
The University of Cambridge is a public research university located in Cambridge, United Kingdom. It is the second-oldest university in both the United Kingdom and the English-speaking world , and the seventh-oldest globally...
mathematician G. H. Hardy
G. H. Hardy
Godfrey Harold “G. H.” Hardy FRS was a prominent English mathematician, known for his achievements in number theory and mathematical analysis....
.

In 1915 he became a professor at Polyteknisk Læreanstalt, working there until 1930, when he took a professorship at the University of Copenhagen. He remained in this post for 21 years until his death in 1951. Børge Jessen
Børge Jessen
Børge Christian Jessen was a Danish mathematician best known for his work in analysis, specifically on zeta function, and in geometry, specifically on Hilbert's third problem....
was one of his students there.

In the 1930s Bohr was a leading critic of the anti-Semitic policies taking root in the German mathematical establishment, publishing an article criticising Ludwig Bieberbach
Ludwig Bieberbach
Ludwig Georg Elias Moses Bieberbach was a German mathematician.-Biography:Born in Goddelau, near Darmstadt, he studied at Heidelberg and under Felix Klein at Göttingen, receiving his doctorate in 1910. His dissertation was titled On the theory of automorphic functions...
's ideas in Berlingske Aften
Weekendavisen
Weekendavisen is a Danish weekly broadsheet newspaper published on Fridays. Its circulation is approximately 60,000 copies, about ten per cent of which cover subscriptions outside Denmark. According to opinion polls, however, the actual number of readers is much higher...
in 1934.

Bohr was also an excellent football player. He had a long playing career with Akademisk Boldklub
Akademisk Boldklub
Akademisk Boldklub or AB is a Danish professional football club from Copenhagen,currently playing at the second highest level in Danish domestic football, the 1st Division.-History:...
, making his debut as a 16 year old in 1903. During the 1905 season he played alongside his brother Niels, who was a goalkeeper. Harald was selected to play for the Danish national football team
Denmark national football team
The Denmark national football team represents Denmark in association football and is controlled by the Danish Football Association , the governing body for the football clubs which are organized under DBU...
in the 1908 Summer Olympics
1908 Summer Olympics
The 1908 Summer Olympics, officially the Games of the IV Olympiad, were an international multi-sport event which was held in 1908 in London, England, United Kingdom. These games were originally scheduled to be held in Rome. At the time they were the fifth modern Olympic games...
, where football was an official event for the first time. Though a Danish side had played at the 1906 Intercalated Games, the opening match of the 1908 Olympic tournament was Denmark's first official international football match. Bohr scored two goals as Denmark beat the French "B" team 9–0. In the next match, the semi-final, Bohr played in a 17–1 win against France
France national football team
The France national football team represents the nation of France in international football. It is fielded by the French Football Federation , the governing body of football in France, and competes as a member of UEFA, which encompasses the countries of Europe...
, which remains an Olympic record to this day. Denmark faced hosts Great Britain in the final, but lost 2–0, and Bohr won a silver medal. After the Olympics he made one further appearance for the national team, in a 2–1 victory against an England amateur team in 1910. His popularity as a footballer was such that when he defended his doctoral thesis the audience was reported as having more football fans than mathematicians.