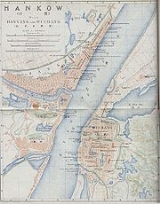 Hankou was one of the three cities whose merging formed modern-day Wuhan
Wuhan
Wuhan is the capital of Hubei province, People's Republic of China, and is the most populous city in Central China. It lies at the east of the Jianghan Plain, and the intersection of the middle reaches of the Yangtze and Han rivers...
, the capital of the Hubei
Hubei
' Hupeh) is a province in Central China. The name of the province means "north of the lake", referring to its position north of Lake Dongting...
province, China
China
Chinese civilization may refer to:* China for more general discussion of the country.* Chinese culture* Greater China, the transnational community of ethnic Chinese.* History of China* Sinosphere, the area historically affected by Chinese culture...
. It stands north of the Han
Han River (Hanshui)
The Han River is a left tributary of the Yangtze River with a length of 1532 km. Historically it was referred to as Hànshuǐ and the name is still occasionally used today....
and Yangtze River
Yangtze River
The Yangtze, Yangzi or Cháng Jiāng is the longest river in Asia, and the third-longest in the world. It flows for from the glaciers on the Tibetan Plateau in Qinghai eastward across southwest, central and eastern China before emptying into the East China Sea at Shanghai. It is also one of the...
s where the Han falls into the Yangtze. Hankou is connected by bridges to its former sister cities Hanyang (between Han and Yangtze) and Wuchang (on the south side of he Yangtze).

Hankou is the main port
Port
A port is a location on a coast or shore containing one or more harbors where ships can dock and transfer people or cargo to or from land....
of Hubei province.

The city's name literally means "The Mouth of the Han", referring to its location on the north bank of the confluence of the Han and Yangtze Rivers. The name appears in a Tang Dynasty
Tang Dynasty
The Tang Dynasty was an imperial dynasty of China preceded by the Sui Dynasty and followed by the Five Dynasties and Ten Kingdoms Period. It was founded by the Li family, who seized power during the decline and collapse of the Sui Empire...
poem by Liu Changqing
Liu Changqing
Liu Changqing , and whose name, especially in older English transliteration, appears as "Liu Chang-ch'ing", was a poet of the Middle Tang Dynasty, and eleven of whose poems were collected in the popular anthology Three Hundred Tang Poems.-See also:...
. Other historical names for the city include Xiakou , Miankou , and Lukou . 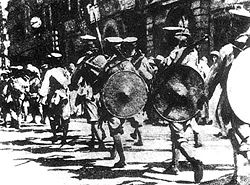 Hankou used to have five colonial concessions from the United Kingdom
United Kingdom
The United Kingdom of Great Britain and Northern IrelandIn the United Kingdom and Dependencies, other languages have been officially recognised as legitimate autochthonous languages under the European Charter for Regional or Minority Languages...
, France
France
The French Republic , The French Republic , The French Republic , (commonly known as France , is a unitary semi-presidential republic in Western Europe with several overseas territories and islands located on other continents and in the Indian, Pacific, and Atlantic oceans. Metropolitan France...
, Russia
Russia
Russia or , officially known as both Russia and the Russian Federation , is a country in northern Eurasia. It is a federal semi-presidential republic, comprising 83 federal subjects...
, Germany and Japan
Japan
Japan is an island nation in East Asia. Located in the Pacific Ocean, it lies to the east of the Sea of Japan, China, North Korea, South Korea and Russia, stretching from the Sea of Okhotsk in the north to the East China Sea and Taiwan in the south...
. The German and Russian concessions were administered by the Chinese government after the First World War. The British left in 1927 during the Northern Expedition after the Chinese Kuomintang
Kuomintang
The Kuomintang of China , sometimes romanized as Guomindang via the Pinyin transcription system or GMD for short, and translated as the Chinese Nationalist Party is a founding and ruling political party of the Republic of China . Its guiding ideology is the Three Principles of the People, espoused...
forces seized the multimillion dollar concession from them, refusing to hand it back to the British. The French and Japanese left after the Second World War.

Hankow was the destination on the escape route of groups of missionaries fleeing the Boxers
Boxer Rebellion
The Boxer Rebellion, also called the Boxer Uprising by some historians or the Righteous Harmony Society Movement in northern China, was a proto-nationalist movement by the "Righteous Harmony Society" , or "Righteous Fists of Harmony" or "Society of Righteous and Harmonious Fists" , in China between...
in the Northern provinces around 1900. The flight of some missionaries from the T'ai-yüan massacre
Taiyuan Massacre
The Taiyuan Massacre was one of the more bloody and infamous parts of the Boxer Rebellion. It took place on July 9, 1900, in Taiyuan, Shanxi province, North China, when the governor of Shanxi named Yuxian , or Yu-Hsien , ordered the killings of 45 Christian missionaries and of local church members,...
in Shan-si
Shanxi
' is a province in Northern China. Its one-character abbreviation is "晋" , after the state of Jin that existed here during the Spring and Autumn Period....
is recorded in the work A Thousand Miles of Miracles in China" (1919) by Reverend A E Glover, one of the fleeing missionaries.