Encyclopedia
Hall, Russell & Company, Limited was a shipbuilder based in Aberdeen
Aberdeen
Aberdeen is Scotland's third most populous city, one of Scotland's 32 local government council areas and the United Kingdom's 25th most populous city, with an official population estimate of ....
, Scotland
Scotland
Scotland is a country that is part of the United Kingdom. Occupying the northern third of the island of Great Britain, it shares a border with England to the south and is bounded by the North Sea to the east, the Atlantic Ocean to the north and west, and the North Channel and Irish Sea to the...
, UK

Brothers James and William Hall, Thomas Russell, a Glasgow
Glasgow
Glasgow is the largest city in Scotland and third most populous in the United Kingdom. The city is situated on the River Clyde in the country's west central lowlands...
engineer, and James Cardno Couper founded the company in 1864 to build steam engines and boilers. In 1867 the company built its first ship, the Kwang Tung, for the Imperial Chinese Navy
Imperial Chinese Navy
The Chinese Imperial Navy came into existence from 1132 during the Song Dynasty to the end of the Qing period in 1912. Prior to 12th century, Chinese naval ships were not organized into a uniform force...
. Like most shipyards of their era, Hall Russell built ships first using iron and later changing to steel.

In 1944–45 Hall, Russell built five coasters
Coastal trading vessel
Coastal trading vessels, also known as coasters, are shallow-hulled ships used for trade between locations on the same island or continent. Their shallow hulls mean that they can get through reefs where deeper-hulled sea-going ships usually cannot....
under sub-contract for the Burntisland Shipbuilding Company
Burntisland Shipbuilding Company
The Burntisland Shipbuilding Company was a shibuilder and repairer in Burntisland, Fife, Scotland that traded from 1918 until 1969.-Founding and early years:...
of Fife
Fife
Fife is a council area and former county of Scotland. It is situated between the Firth of Tay and the Firth of Forth, with inland boundaries to Perth and Kinross and Clackmannanshire...
: hull numbers 773, 776, 781, 785 and 788. In 1956–57 Hall, Russell built two more coasters for Burntisland: hull 750 launched as SS Winga and hull 857 launched as William Cory & Son's
Cory Environmental
Cory Environmental is a large waste disposal company based in the United Kingdom. Cory operates in more than 30 locations throughout England, providing services in the collection, recycling and disposal of waste as well as municipal cleansing.-Operations:...
MV Corsea.

In 1977 the company became part of the nationalised British Shipbuilders Corporation
British Shipbuilders
British Shipbuilders Corporation was a public corporation that owned and managed the shipbuilding industry in England and Scotland from 1977 and through the 1980s...
, before being returned to the private sector in 1986. It came under the ownership of A&P Appledore International
A&P Group
A&P Group Ltd is the largest ship repair and conversion company in the UK, with three shipyards located in Hebburn, Middlesbrough and Falmouth. The Company undertakes a wide variety of maintenance and repair work on commercial and military ships with projects ranging from a two day alongside repair...
in 1989, as A&P Appledore International (Aberdeen). However, it had been classed by the Government as a naval shipbuilder, despite traditionally producing fishing vessels and small cargo ships, and closed in 1992.

In the Second World War
World War II
World War II, or the Second World War , was a global conflict lasting from 1939 to 1945, involving most of the world's nations—including all of the great powers—eventually forming two opposing military alliances: the Allies and the Axis...
Hall Russell built a number of Royal Navy
Royal Navy
The Royal Navy is the naval warfare service branch of the British Armed Forces. Founded in the 16th century, it is the oldest service branch and is known as the Senior Service...
Flower Class corvette
Flower class corvette
The Flower-class corvette was a class of 267 corvettes used during World War II, specifically with the Allied navies as anti-submarine convoy escorts during the Battle of the Atlantic...
s and River class frigate
River class frigate
The River class frigate was a class of 151 frigates launched between 1941 and 1944 for use as anti-submarine convoy escorts in the North Atlantic....
s. After the war the company built fishing vessels, cargo ships and naval patrol craft. The last vessel completed at the yard was the , delivered in 1991.

The most widely known ship built by Hall Russell was MV Sir William Hardy. Launched in 1955, she was the first diesel-electric all-refrigerated trawler built in the UK. Refurbished by Greenpeace
Greenpeace
Greenpeace is a non-governmental environmental organization with offices in over forty countries and with an international coordinating body in Amsterdam, The Netherlands...
, she was re-named on 29 April 1978 the . She was bombed by French agents in New Zealand 10th July 1985. Her masts currently stand outside the Dargaville
Dargaville
Dargaville is a town in the North Island of New Zealand. It is situated on the bank of the Northern Wairoa River in the Northland region. The town is located 55 kilometres southwest of Whangarei....
Museum in upper North Island, New Zealand.

Ships built by Hall Russell include: 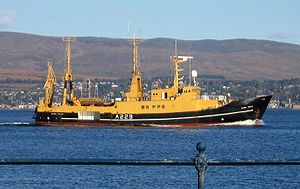