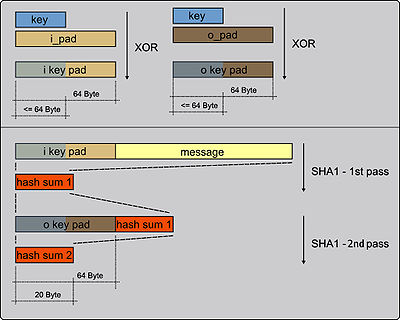 An iterative hash function breaks up a message into blocks of a fixed size and iterates over them with a compression function. For example, MD5 and SHA-1 operate on 512-bit blocks. The size of the output of HMAC is the same as that of the underlying hash function (128 or 160 bits in the case of MD5 or SHA-1, respectively), although it can be truncated if desired.

The definition and analysis of the HMAC construction was first published in 1996 by Mihir Bellare
Mihir Bellare
Mihir Bellare is a cryptographer and professor at the University of California, San Diego. He has published several seminal papers in the field of cryptography , many coauthored with Phillip Rogaway. Bellare has published a number of papers in the field of Format-Preserving Encryption...
, Ran Canetti, and Hugo Krawczyk, who also wrote RFC 2104. This paper also defined a variant called NMAC that is rarely if ever used. FIPS
Federal Information Processing Standard
A Federal Information Processing Standard is a publicly announced standardization developed by the United States federal government for use in computer systems by all non-military government agencies and by government contractors, when properly invoked and tailored on a contract...
PUB 198 generalizes and standardizes the use of HMACs. HMAC-SHA-1 and HMAC-MD5 are used within the IPsec
IPsec
Internet Protocol Security is a protocol suite for securing Internet Protocol communications by authenticating and encrypting each IP packet of a communication session...
and TLS
Transport Layer Security
Transport Layer Security and its predecessor, Secure Sockets Layer , are cryptographic protocols that provide communication security over the Internet...
protocols.

Then HMAC(K,m) is mathematically defined by

The following pseudocode
Pseudocode
In computer science and numerical computation, pseudocode is a compact and informal high-level description of the operating principle of a computer program or other algorithm. It uses the structural conventions of a programming language, but is intended for human reading rather than machine reading...
demonstrates how HMAC may be implemented. Blocksize is 64 (bytes) when using one of the following hash functions: SHA-1, MD5, RIPEMD-128/160.

A business that suffers from attackers that place fraudulent Internet
Internet
The Internet is a global system of interconnected computer networks that use the standard Internet protocol suite to serve billions of users worldwide...
orders may insist that all its customers deposit a secret key with them. Along with an order, a customer must supply the order's HMAC digest, computed using the customer's symmetric key. The business, knowing the customer's symmetric key, can then verify that the order originated from the stated customer and has not been tampered with.

The design of the HMAC specification was motivated by the existence of attacks on more trivial mechanisms for combining a key with a hash function. For example, one might assume the same security that HMAC provides could be achieved with MAC = H(key ∥ message). However, this method suffers from a serious flaw: with most hash functions, it is easy to append data to the message without knowing the key and obtain another valid MAC. The alternative, appending the key using MAC = H(message ∥ key), suffers from the problem that an attacker who can find a collision in the (unkeyed) hash function has a collision in the MAC. Using MAC = H(key ∥ message ∥ key) is better, however various security papers have suggested vulnerabilities with this approach, even when two different keys are used.

No known extensions attacks have been found against the current HMAC specification which is defined as H(key1 ∥ H(key2 ∥ message)) because the outer application of the hash function masks the intermediate result of the internal hash. The values of ipad and opad are not critical to the security of the algorithm, but were defined in such a way to have a large Hamming distance
Hamming distance
In information theory, the Hamming distance between two strings of equal length is the number of positions at which the corresponding symbols are different...
from each other and so the inner and outer keys will have fewer bits in common.

The cryptographic strength of the HMAC depends upon the size of the secret key that is used. The most common attack against HMACs is brute force to uncover the secret key. HMACs are substantially less affected by collisions than their underlying hashing algorithms alone.

. Therefore, HMAC-MD5 does not suffer from the same weaknesses that have been found in MD5.

In 2006, Jongsung Kim, Alex Biryukov
Alex Biryukov
Alex Biryukov is a cryptographer, currently an assistant professor at the University of Luxembourg. His notable work includes the design of the stream cipher LEX, as well as the cryptanalysis of numerous cryptographic primitives. In 1998, he developed impossible differential cryptanalysis together...
, Bart Preneel
Bart Preneel
Bart Preneel is a Belgian cryptographer and cryptanalyst. He is a professor at Katholieke Universiteit Leuven, in the COSIC group, president of the International Association for Cryptologic Research, and project manager of ECRYPT....
, and Seokhie Hong showed how to distinguish HMAC with reduced versions of MD5 and SHA-1 or full versions of HAVAL
HAVAL
HAVAL is a cryptographic hash function. Unlike MD5, but like most modern cryptographic hash functions, HAVAL can produce hashes of different lengths. HAVAL can produce hashes in lengths of 128 bits, 160 bits, 192 bits, 224 bits, and 256 bits...
, MD4
MD4
The MD4 Message-Digest Algorithm is a cryptographic hash function developed by Ronald Rivest in 1990. The digest length is 128 bits. The algorithm has influenced later designs, such as the MD5, SHA-1 and RIPEMD algorithms....
, and SHA-0 from a random function
Random function
A random function is a function chosen at random from a finite family of functions. Typically, the family consists of the set of all maps from the domain to the codomain. Thus, a random function can be considered to map each input independently at random to any one of the possible outputs. Viewed...
or HMAC with a random function. Differential distinguishers allow an attacker to devise a forgery attack on HMAC. Furthermore, differential and rectangle distinguishers can lead to second-preimage attacks
Preimage attack
In cryptography, the preimage attack is a classification of attacks on hash functions for finding a message that has a specific hash value.There are two types of preimage attacks:...
. HMAC with the full version of MD4 can be forged
Forgery (Cryptography)
In a cryptographic digital signature or MAC system, digital signature forgery is the ability to create a pair consisting of a message m and a signature \sigma that is valid for m, where m has not been signed in the past by the legitimate signer...
with this knowledge. These attacks do not contradict the security proof of HMAC, but provide insight into HMAC based on existing cryptographic hash functions.