Encyclopedia
In cryptography
Cryptography
Cryptography is the practice and study of techniques for secure communication in the presence of third parties...
, a message authentication code (often MAC) is a short piece of information used to authenticate a message
Message
A message in its most general meaning is an object of communication. It is a vessel which provides information. Yet, it can also be this information. Therefore, its meaning is dependent upon the context in which it is used; the term may apply to both the information and its form...
.

A MAC algorithm
Algorithm
In mathematics and computer science, an algorithm is an effective method expressed as a finite list of well-defined instructions for calculating a function. Algorithms are used for calculation, data processing, and automated reasoning...
, sometimes called a keyed (cryptographic) hash function, accepts as input a secret key and an arbitrary-length message to be authenticated, and outputs a MAC (sometimes known as a tag). The MAC value protects both a message's data integrity
Data integrity
Data Integrity in its broadest meaning refers to the trustworthiness of system resources over their entire life cycle. In more analytic terms, it is "the representational faithfulness of information to the true state of the object that the information represents, where representational faithfulness...
as well as its authenticity
Authentication
Authentication is the act of confirming the truth of an attribute of a datum or entity...
, by allowing verifiers (who also possess the secret key) to detect any changes to the message content.

While MAC functions are similar to cryptographic hash function
Cryptographic hash function
A cryptographic hash function is a deterministic procedure that takes an arbitrary block of data and returns a fixed-size bit string, the hash value, such that an accidental or intentional change to the data will change the hash value...
s, they possess different security requirements. To be considered secure, a MAC function must resist existential forgery under chosen-plaintext attack
Chosen-plaintext attack
A chosen-plaintext attack is an attack model for cryptanalysis which presumes that the attacker has the capability to choose arbitrary plaintexts to be encrypted and obtain the corresponding ciphertexts. The goal of the attack is to gain some further information which reduces the security of the...
s. This means that even if an attacker has access to an oracle
Oracle machine
In complexity theory and computability theory, an oracle machine is an abstract machine used to study decision problems. It can be visualized as a Turing machine with a black box, called an oracle, which is able to decide certain decision problems in a single operation. The problem can be of any...
which possesses the secret key and generates MACs for messages of the attacker's choosing, the attacker cannot guess the MAC for other messages without performing infeasible amounts of computation.

MACs differ from digital signature
Digital signature
A digital signature or digital signature scheme is a mathematical scheme for demonstrating the authenticity of a digital message or document. A valid digital signature gives a recipient reason to believe that the message was created by a known sender, and that it was not altered in transit...
s as MAC values are both generated and verified using the same secret key. This implies that the sender and receiver of a message must agree on the same key before initiating communications, as is the case with symmetric encryption. For the same reason, MACs do not provide the property of non-repudiation
Non-repudiation
Non-repudiation refers to a state of affairs where the purported maker of a statement will not be able to successfully challenge the validity of the statement or contract. The term is often seen in a legal setting wherein the authenticity of a signature is being challenged...
offered by signatures specifically in the case of a network-wide shared secret key: any user who can verify a MAC is also capable of generating MACs for other messages. In contrast, a digital signature is generated using the private key of a key pair, which is asymmetric encryption. Since this private key is only accessible to its holder, a digital signature proves that a document was signed by none other than that holder. Thus, digital signatures do offer non-repudiation.

The term message integrity code (MIC) is frequently substituted for the term MAC, especially in communications, where the acronym MAC traditionally stands for Media Access Control
Media Access Control
The media access control data communication protocol sub-layer, also known as the medium access control, is a sublayer of the data link layer specified in the seven-layer OSI model , and in the four-layer TCP/IP model...
. However, some authors use MIC as a distinctly different term from a MAC; in their usage of the term the MIC operation does not use secret keys. This lack of security means that any MIC intended for use gauging message integrity should be encrypted or otherwise be protected against tampering. MIC algorithms are created such that a given message will always produce the same MIC assuming the same algorithm is used to generate both. Conversely, MAC algorithms are designed to produce matching MACs only if the same message, secret key and initialization vector
Initialization vector
In cryptography, an initialization vector is a fixed-size input to a cryptographic primitive that is typically required to be random or pseudorandom...
are input to the same algorithm. MICs do not use secret keys and, when taken on their own, are therefore a much less reliable gauge of message integrity than MACs. Because MACs use secret keys, they do not necessarily need to be encrypted to provide the same level of assurance.

Various standards exist that define MAC algorithms. These include: 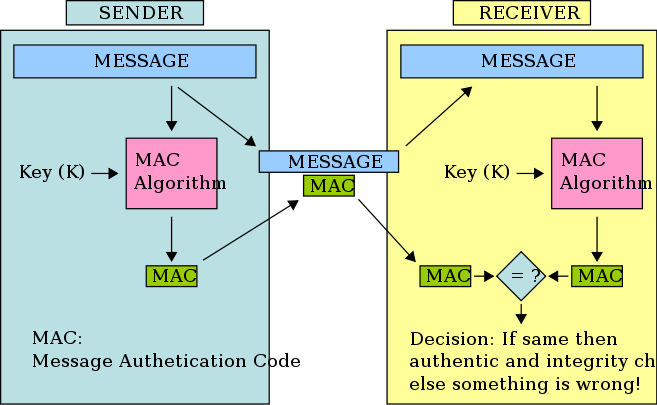