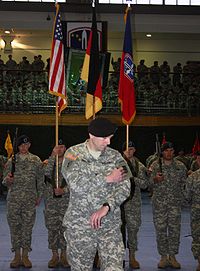 The army announced that the total active duty force structure would grow by six Infantry
Infantry
Infantrymen are soldiers who are specifically trained for the role of fighting on foot to engage the enemy face to face and have historically borne the brunt of the casualties of combat in wars. As the oldest branch of combat arms, they are the backbone of armies...
Brigade Combat Team
Brigade combat team
The brigade combat team is the basic deployable unit of maneuver in the US Army. A brigade combat team consists of one combat arms branch maneuver brigade, and its attached support and fire units. A brigade combat team is generally commanded by a colonel , but in rare instances it is commanded by...
s and eight support brigade
Brigade
A brigade is a major tactical military formation that is typically composed of two to five battalions, plus supporting elements depending on the era and nationality of a given army and could be perceived as an enlarged/reinforced regiment...
s of various types. This would grow the force from 42 Brigade Combat Teams and 75 modular support brigades in 2007 to 48 Brigade Combat Teams and 83 modular support brigades by 2013. However on April 6th 2009, Defense Secretary Gates announced that the Army will stop the growth of Army brigade combat teams at 45 versus the initially planned 48.

The plan called for US$
United States dollar
The United States dollar , also referred to as the American dollar, is the official currency of the United States of America. It is divided into 100 smaller units called cents or pennies....
66,400,000,000 in spending in construction between 2006 and 2013. This construction comprised 743 projects, including 20 new Brigade complexes. One third of the entire Army was scheduled to be realigned during the Grow the Army and BRAC plans.

As part of the 2003–2008 restructuring plan
Transformation of the United States Army
Army Transformation describes the future-concept of the United States Army's plan of modernization. Transformation is a generalized term for the integration of new concepts, organizations, and technology within the armed forces of the United States....
, the Army moved from using division
Division (military)
A division is a large military unit or formation usually consisting of between 10,000 and 20,000 soldiers. In most armies, a division is composed of several regiments or brigades, and in turn several divisions typically make up a corps...
-sized units to brigade-sized units as the basic unit of deployment. As such, the 2007 army consisted of 42 brigades, forty of which were divided evenly amongst ten division-level commands, while two were independent. The six newly activated brigades will be designed as separate independent brigades, without division-level commands.

The timeline of the Brigade Combat Team growths calls for the reflagging of the 2nd Brigade Combat Team, 1st Infantry Division as the independent 172nd Infantry Brigade Combat Team in fiscal year 2008; this was accomplished during a reflagging ceremony on March 19 in Schweinfurt
Schweinfurt
Schweinfurt is a city in the Lower Franconia region of Bavaria in Germany on the right bank of the canalized Main, which is here spanned by several bridges, 27 km northeast of Würzburg.- History :...
, Germany
Germany
Germany , officially the Federal Republic of Germany , is a federal parliamentary republic in Europe. The country consists of 16 states while the capital and largest city is Berlin. Germany covers an area of 357,021 km2 and has a largely temperate seasonal climate...
. The 2nd Brigade will subsequently be reformed at Fort Riley, Kansas. A similar event occurred in September 2010, when the 2nd Brigade Combat Team, 1st Armored Division in Baumholder
Baumholder
Baumholder is a town in the Birkenfeld district in Rhineland-Palatinate, Germany, in the Westrich, an historic region that encompasses areas in both Germany and France...
, Germany, reflagged as the 170th Infantry Brigade
170th Infantry Brigade (United States)
The of the United States Army was reestablished 15 July 2009 at US Army Garrison Baumholder in Germany as part of the Grow the Army plan. The 170th Infantry Brigade was formed by reflagging the 2nd Brigade, 1st Armored Division. The soldiers and equipment will remain in place but the 2d Brigade...
.