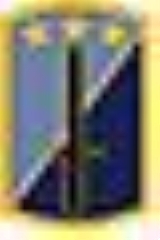 The 170th Infantry Brigade was first activated 25 August 1917 at Camp Custer, Michigan, as one of two brigades of the 85th Infantry Division, National Army consisting of the 339th and 340th Infantry Regiments. After a year of training the division left the U.S. for England. When the American Expeditionary Force North Russia was formed to be sent to Arkhangelsk, Russia, the 339th Infantry Regiment provided the infantry component, with support units also taken from the 85th Division sent along as well. While there, the 339th saw combat against the Bolsheviks. The 340th Infantry Regiment and the remainder of the 85th Infantry Division was stationed in Lorraine, on the Western Front in France as a depot division and therefore did not participate in any combat operations.

With the reestablishment of brigades in the TOE of divisions in the 1960s following the short-lived experiment with pentomic
Pentomic
Pentomic refers to a structure for infantry divisions adopted by the U.S. Army in 1957 in response to the perceived threat posed by tactical nuclear weapons use on the battlefield....
organization, the 2nd Brigade
2nd Brigade, 24th Infantry Division (United States)
The 2nd Brigade, 24th Infantry Division was an infantry brigade of the United States Army. Before its most recent deactivation in 2006, it was based at Fort Stewart, Georgia. It was a divisional brigade of the 24th Infantry Division.- History :...
, 24th Infantry Division was in 1963 assigned the heritage of the 170th Infantry Brigade. The 24th Division was inactivated in 1970, then reactivated from 1975 to 1996. When the 24th was reactivated again in 1999 it was as a headquarters unit only with separate National Guard brigades attached and no organic brigades of its own. It was inactivated again on 1 August 2006.

In early 2011, the 170th IBCT deployed in support of Operation Enduring Freedom 11-12 to Regional Command North. During the brigade's deployment, it partnered with the 303rd Afghan Uniformed Police and the Afghan Border Police's 5th Zone. Key highlights of the deployment include the handover of security responsibilities for Mazar E Sharif from the International Security Assistance Force to the Government of the Islamic Republic of Afghanistan. The brigade also deployed two of its battalions for separate missions in support of other regional commands. 3-4 Infantry Battalion deployed in November 2010 to Regional Command Capitol where it initially assumed part of the NTMA training mission in and around Kabul. It later transitioned to a Security Force Mission across Afghanistan, ensuring various NTMA elements and VIPs were able to accomplish their tasks in a secure environment. The brigade's armor battalion, 4-70 Armor deployed to Regional Command South where it operated under Combined Team Uruzgan, partnered with the Australian Army. The brigade is expected to redeploy back to Baumholder, Germany in early 2012 where it will prepare for future operations under the current command team of COL Patrick Matlock and CSM Cornelius Grinston.