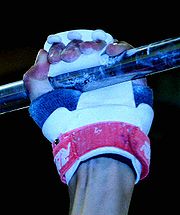 Grips are devices that are worn on the hands of artistic gymnasts
Artistic gymnastics
Artistic gymnastics is a discipline of gymnastics where gymnasts perform short routines on different apparatus, with less time for vaulting . The sport is governed by the Federation Internationale de Gymnastique , which designs the Code of Points and regulates all aspects of international elite...
when performing on various gymnastics apparatus. They are worn by female gymnasts on the uneven bars, and by male gymnasts on the high bar, still rings and parallel bars. They are used to enhance the gymnast's grip on the apparatus, and also to reduce (but not eliminate) the friction that can cause painful blisters and rips, in which outer layers of skin separate and tear away from the hand.

Grips are optional and are not used by all gymnasts. Some athletes substitute sports tape or gauze for grips, while others use bare hands.

A grip consists of a wide strip of leather
Leather
Leather is a durable and flexible material created via the tanning of putrescible animal rawhide and skin, primarily cattlehide. It can be produced through different manufacturing processes, ranging from cottage industry to heavy industry.-Forms:...
joined to a wrist strap. The leather strip, which covers and protects the palm of the hand, is approximately five centimeters wide and has finger holes at one end. On properly fitted grips, the finger holes will be positioned at the first knuckle
Knuckle
The knuckles are the joints of the fingers and toes, which are brought into prominence when the hand is clenched and a fist is made. The word is cognate to similar words in other Germanic languages, such as the Dutch "Knokkel" or German "Knöchel" , i.e., Knöchlein, the diminutive of the German...
s of the inserted fingers.

Some types of grips, known as dowel grips, incorporate a leather-covered dowel rod
Dowel
A dowel is a solid cylindrical rod, usually made of wood, plastic or metal. In its original manufactured form, dowel is called dowel rod.Dowel rod is employed in numerous, diverse applications. It is used to form axles in toys, as detents on gymnastics grips, as knitting needles, as structural...
or pipe
Pipe (material)
A pipe is a tubular section or hollow cylinder, usually but not necessarily of circular cross-section, used mainly to convey substances which can flow — liquids and gases , slurries, powders, masses of small solids...
to create a linear bump on the outer face of the grip. This bump, in conjunction with the bar, forms a detent
Detent
Detent is the term for a method, as well as the actual device, used to mechanically resist or arrest the rotation of a wheel, axle or spindle....
that serves to leverage the gymnast's grip on the bar, thus reducing the hand pressure needed to maintain a grip on the apparatus.

The wrist strap is used to secure the grip to the gymnast's hand and to transfer body weight from the fingers to the wrist. It encircles the wearer's wrist and is then locked in place with either velcro
Velcro
Velcro is the brand name of the first commercially marketed fabric hook-and-loop fastener, invented in 1948 by the Swiss electrical engineer George de Mestral...
or a buckle
Buckle
The buckle or clasp is a device used for fastening two loose ends, with one end attached to it and the other held by a catch in a secure but adjustable manner. Usually overlooked and taken for granted, the invention of the buckle has been indispensable in securing two ends before the invention of...
. Gymnasts typically wear soft material, such as cloth wristband
Wristband
Wristbands are encircling strips worn on the wrist, made from a variety of materials depending on the purpose. The term can be used to refer to the bracelet-like band of a wristwatch, to the cuff or other part of a sleeve that covers the wrist, or to decorative or functional bands worn on the wrist...
s, under the wrist straps to prevent skin chafing
Chafing
Chafing when used as a nautical term describes the process of wear on a line or sail caused by constant rubbing against a hard, usually metallic, surface. Various methods are used to prevent chafing. Chafing of lines that rest on a choke on a boat can be prevented by putting a protecting material...
. Some brands of grips include soft, removable pads that fit under the wrist straps.

Gymnasts at lower competition levels and those participating in recreational gymnastics typically use grips that lack dowel rods. Such grips provide no mechanical advantage for gripping the bar; they are used primarily to minimize friction injuries. Also, these grips are usually less expensive and are made of thinner leather.