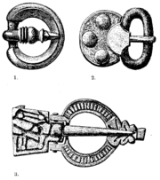 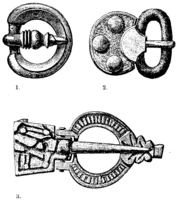 The buckle or clasp is a device used for fastening two loose ends, with one end attached to it and the other held by a catch in a secure but adjustable manner. Usually overlooked and taken for granted, the invention of the buckle has been indispensable in securing two ends before the invention of the zipper
Zipper
A zipper is a commonly used device for temporarily joining two edges of fabric...
. The basic buckle frame comes in a variety of shapes and sizes dependent on the intended use and fashion of the era. Buckles are still in very much use today as they have been in the past with more than just securing one’s belt
Belt (clothing)
A belt is a flexible band or strap, typically made of leather or heavy cloth, and worn around the waist. A belt supports trousers or other articles of clothing.-History:...
, but being one of the most dependable devices in securing a range of items.

The word "buckle" enters Middle English
Middle English
Middle English is the stage in the history of the English language during the High and Late Middle Ages, or roughly during the four centuries between the late 11th and the late 15th century....
via Old French
Old French
Old French was the Romance dialect continuum spoken in territories that span roughly the northern half of modern France and parts of modern Belgium and Switzerland from the 9th century to the 14th century...
and the Latin
Latin
Latin is an Italic language originally spoken in Latium and Ancient Rome. It, along with most European languages, is a descendant of the ancient Proto-Indo-European language. Although it is considered a dead language, a number of scholars and members of the Christian clergy speak it fluently, and...
buccula or "cheek-strap," as for a helmet. Some of the earliest buckles known are those used by Roman soldiers to strap their body armor together and prominently on the balteus and cingulum
Cingulum
The cingulum is a collection of white matter fibers projecting from the cingulate gyrus to the entorhinal cortex in the brain, allowing for communication between components of the limbic system....
. Made out of bronze and expensive, these buckles were purely functional for their strength and durability vital to the individual soldier. The baldric
Baldric
A baldric is a belt worn over one shoulder that is typically used to carry a weapon or other implement such as a bugle or drum...
was a later belt worn diagonally over the right shoulder down to the waist at the left carrying the sword, and its buckle therefore was as important as that on a Roman soldier’s armor.

Bronze Roman buckles came in various types. Not only used for practical purposes, these buckles were also decorated. A Type I Roman buckle was a “buckle-plate” either decorated or plain and consisted of geometric ornaments. Type IA Roman buckles were similar to Type I buckles but differed by being long and narrow, made of double sheet metal, and attached to small D-shaped buckles (primarily had dolphin-heads as decorations). Type IB “buckle-loops” were even more similar to Type IA buckles, only difference being that instead of dolphin-heads, they were adorned with horse-heads. There were also Type II buckles (Type IIA and Type IIB) used by Romans, but all types of Roman buckles could have served purposes for simple clothing as well, and predominantly, as a military purpose.

Aside from the practical use found in Roman buckles, Scythian and Sarmatian buckles incorporated animal motifs that were characteristic to their respective decorative arts. These motifs often represented animals engaged in mortal combat. These motifs were imported by many Germanic peoples and the belt buckles were evident in the graves of the Franks and Burgundies. And throughout the Middle Ages, the buckle was used mostly for ornamentation until the second half of the 14th century where the knightly belt and buckle took on its most splendid form.

Buckles remained exclusively for the wealthy until the 15th century where improved manufacturing techniques made it possible to easily produce a cheaper molded item available to the general population.

The buckle essentially consists of four main components: the frame, chape, bar, and prong. Although recent buckle designs have changed, the components mentioned are what the most commonly used buckles consist of. The oldest Roman buckles are of a simple "D"-shaped frame, the prong or tongue of which attaches on one side to reach the other. Buckles with double-loop "8"-shaped frames whose prong attaches to the center post do not emerge until the 14th century. Multi-part buckles with chapes and removable pins appear in the 17th century and are often used on shoes.

The frame is the most visible part of the buckle and holds the other parts of the buckle together. Buckle frames come in various shapes, sizes, and decorations. The shape of the frame could be a plain square or rectangle, but may be oval or made into a circular shape. A reverse curve of the frame indicated that the whole buckle was intended to be used for securing a thick material, such as leather. This reverse curve shape made it easier to thread the intended thick material end over the bar. But the shape of the frame is not limited to simply squares and ovals, the decoration of the frame itself defines the shape it will turn out to be. Since the frame was the largest part of the buckle, any and all decorations would be placed on it. Decorations ranged from wedged shapes, picture references to people and animals, and insignia of a desired organization.

Chapes or "caps" of various designs could be fitted to the bar to enable one strap end to be secured before fastening the other, adjustable end. This made buckles easily removable and interchangeable leading to a significant advantage since buckles were expensive. Unfortunately, the teeth or spikes on the semi-circular chapes damaged the straps or belts, making frequent repairs of the material necessary. Buckles fitted with the “T”-, anchor-, or spade-shaped chapes avoided this problem but needed a slotted end in the belt to accommodate them.

Typically attached to the bar, the your prong was made out of steel or other metal that fitted through the buckle (hole in the belt) to secure the material at a pre-set lenghth. This is seen in the conventional or commonly used belt and buckle of today.

The bar served to hold the chape and prong in place attached to the frame. When prongs and chapes are removed from the buckle design, the buckle incorporated a movable bar relying on the tension of the adjusted belt to keep it in place.

The first known buckles to be used were made out of bronze for their strength and durability for military usage.

For the last few hundred years, buckles have been made from brass (an alloy of copper and zinc). In the 18th century, brass buckles incorporated iron bars, chapes, and prongs due to the parts being made by different manufactures. Silver was also used in buckle manufacturing for its malleability and for being strong and durable with an attractive shine. White metal, any bright metallic compound, was also used in all styles of buckles; however, if iron was present, rust will form if it is allowed to be exposed and remain in damp conditions.

Pearl buckles have been made from pearly shells and usually for ladies’ dresses. Since a reasonable size flat surface was needed to make a buckle, oyster was commonly used to make these types of buckles. The quality and color of course vary, ranging from layers of yellow and white to brown or grey.

When preferred materials were scarce during the Great Depression of the 1930s and the two World Wars, buckles became a low priority and manufactures needed to find ways to continue to produce them cheaply. Makers turned to wood as a cheap alternative since it was easily worked by hand or simple machinery by impressing the designs onto the wood. But there were problems using wood. Any attempt to brighten the wood’s dull appearance with painted designs or plasterwork embellishments immediately came off if the buckle were to be washed.

Buckles were not entirely made out of leather because a frame and bar of leather would not be substantial enough to carry a prong or the full weight of the belt and anything the belt and buckle intend to support. However, leather (or dyed suede, more common to match a lady’s garment color) was used more as a “cover-up” for cheap materials to create a product worthy of buying.

Buckles were not made out of glass; rather the glass was used as a decorative feature that covered the entire frame of a metal buckle. One method of creating glass buckles was gluing individual discs of glass to the metal frame. Another more intricate method was to set a wire into the back of a glass disc, and then threading the wire through a hole in the fretted frame of the buckle. The glass was further secured by either bending it over the back of the frame or splayed out like a rivet.

Compositions refers to polymer
Polymer
A polymer is a large molecule composed of repeating structural units. These subunits are typically connected by covalent chemical bonds...
materials used for buckles. Celluloid
Celluloid
Celluloid is the name of a class of compounds created from nitrocellulose and camphor, plus dyes and other agents. Generally regarded to be the first thermoplastic, it was first created as Parkesine in 1862 and as Xylonite in 1869, before being registered as Celluloid in 1870. Celluloid is...
, a type of thermoplastic
Thermoplastic
Thermoplastic, also known as a thermosoftening plastic, is a polymer that turns to a liquid when heated and freezes to a very glassy state when cooled sufficiently...
invented in 1869, was used sparingly and only for decoration until after World War I where it began to be produced on a wider commercial scale. After World War II, the chemical industry saw a great expansion where Celluloid and other plastics such as Casein
Casein
Casein is the name for a family of related phosphoprotein proteins . These proteins are commonly found in mammalian milk, making up 80% of the proteins in cow milk and between 60% and 65% of the proteins in human milk....
and Bakelite formed the basis of the buckle-making industry. Many thermoplastic polymers such as nylon
Nylon
Nylon is a generic designation for a family of synthetic polymers known generically as polyamides, first produced on February 28, 1935, by Wallace Carothers at DuPont's research facility at the DuPont Experimental Station...
are now used in snap-fit buckles for a wide variety of applications.


Clasp (Clearing up some disambiguation)

Although any device that serves to secure two loose ends is casually called a buckle, if it consists of two separate pieces with one for a hook and the other for a loop, it should be called a clasp. Clasps became increasingly popular at the turn of the 19th century with one clear disadvantage: since each belt end was fixed to each clasp piece, the size of the belt was typically not adjustable unless an elastic panel was inserted.

A buckle without a chape or prongs is called a buckle trim or slide. It may have been designed this particular way or it may have lost its prongs through continuous use. This type was frequently used in home dress-making (belt end being secured with the simple hook-and-eye) and was purely used for decoration for items such as shoe fronts to conceal unattractive elastic fitting.


Conventional (a.k.a. The Belt buckle)

The conventional buckle with a frame, bar and prong gives the most reliable and easy-to-use closure for a belt. It is not meant, by design, to offer much space for decoration, but for its time tested reliability.