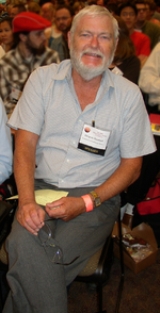 Benford tends to write hard science fiction
Hard science fiction
Hard science fiction is a category of science fiction characterized by an emphasis on scientific or technical detail, or on scientific accuracy, or on both. The term was first used in print in 1957 by P. Schuyler Miller in a review of John W. Campbell, Jr.'s Islands of Space in Astounding Science...
which incorporates the research he is doing as a practical scientist. He has worked on several collaborations with authors including William Rotsler
William Rotsler
William "Bill" Rotsler was an American cartoonist and graphic artist; author of several science fiction novels and short stories, and television and film novelizations, and non-fiction works on a variety of topics, ranging from Star Trek to pornography; a prominent member of science fiction...
, David Brin
David Brin
Glen David Brin, Ph.D. is an American scientist and award-winning author of science fiction. He has received the Hugo, Locus, Campbell and Nebula Awards.-Biography:...
and Gordon Eklund
Gordon Eklund
Gordon Eklund is a Nebula Award-winning, American science fiction author whose works include the "Lord Tedric" series and two of the earliest original novels based on the 1960s Star Trek TV series. He has written under the pen name Wendell Stewart, and in one instance under the name of the late E. E...
. His time-travel novel Timescape
Timescape
Timescape is a 1980 novel by science fiction writer Gregory Benford . It won the 1980 Nebula and British Science Fiction Awards, and the 1981 John W. Campbell Memorial Award for Best Science Fiction Novel...
(1980) won both the Nebula Award
Nebula Award
The Nebula Award is given each year by the Science Fiction and Fantasy Writers of America , for the best science fiction/fantasy fiction published in the United States during the previous year...
and the John W. Campbell Memorial Award. A scientific procedural
Procedural (genre)
A Procedural is a cross-genre type of literature, film, or television program involving a sequence of technical detail. A documentary film may be written in a procedural style to heighten narrative interest.- Fiction :...
, the novel eventually loaned its title to a line of science fiction published by Pocket Books
Pocket Books
Pocket Books is a division of Simon & Schuster that primarily publishes paperback books.- History :Pocket produced the first mass-market, pocket-sized paperback books in America in early 1939 and revolutionized the publishing industry...
. In the late 1990s, he wrote Foundation's Fear
Foundation's Fear
Foundation's Fear is a science fiction novel by Gregory Benford, set in Isaac Asimov's Foundation universe. It is the first book of the Second Foundation trilogy, which was written after Asimov's death by three authors, authorized by the Asimov estate....
, one of an authorized sequel trilogy to Isaac Asimov
Isaac Asimov
Isaac Asimov was an American author and professor of biochemistry at Boston University, best known for his works of science fiction and for his popular science books. Asimov was one of the most prolific writers of all time, having written or edited more than 500 books and an estimated 90,000...
's Foundation series
The Foundation Series
The Foundation Series is a science fiction series by Isaac Asimov. There are seven volumes in the Foundation Series proper, which in its in-universe chronological order are: Prelude to Foundation, Forward the Foundation, Foundation, Foundation and Empire, Second Foundation, Foundation's Edge, and...
. Other novels published in that period include several near-future science thrillers: Cosm (1998), The Martian Race (1999) and Eater
Eater (novel)
Eater is a hard science fiction novel written by UC- Irvine physics professor Gregory Benford. It was published in May 2000 by Eos. Heavy on the physics information, Eater describes humankind's encounter with a cosmic intelligence that comes in the form of a small black hole.-Plot summary:In the...
(2000).

Benford has also served as an editor of numerous alternate history
Alternate history (fiction)
Alternate history or alternative history is a genre of fiction consisting of stories that are set in worlds in which history has diverged from the actual history of the world. It can be variously seen as a sub-genre of literary fiction, science fiction, and historical fiction; different alternate...
anthologies as well as collections of Hugo Award
Hugo Award
The Hugo Awards are given annually for the best science fiction or fantasy works and achievements of the previous year. The award is named after Hugo Gernsback, the founder of the pioneering science fiction magazine Amazing Stories, and was officially named the Science Fiction Achievement Awards...
winners.

He has been nominated for four Hugo Award
Hugo Award
The Hugo Awards are given annually for the best science fiction or fantasy works and achievements of the previous year. The award is named after Hugo Gernsback, the founder of the pioneering science fiction magazine Amazing Stories, and was officially named the Science Fiction Achievement Awards...
s (for two short stories and two novellas) and 12 Nebula Awards
Nebula Award
The Nebula Award is given each year by the Science Fiction and Fantasy Writers of America , for the best science fiction/fantasy fiction published in the United States during the previous year...
(in all categories). In addition to Timescape, he won the Nebula for the novelette "If the Stars Are Gods" (with Eklund).

Benford was a guest of honour at Aussiecon Three, the 1999 Worldcon
Worldcon
Worldcon, or more formally The World Science Fiction Convention, is a science fiction convention held each year since 1939 . It is the annual convention of the World Science Fiction Society...
. He remains a regular contributor to science fiction fanzines, such as Apparatchik
Apparatchik (fanzine)
Apparatchik , nicknamed Apak, was a tri-weekly science fiction fanzine by Andrew Hooper, Carl Juarez, and Victor Gonzalez. It was a nominee for the 1996 Hugo Award for Best Fanzine. The final, 80th, issue was dated June 20, 1997....
.


Contributions to science and speculative science

In addition to establishing Benford's law of controversy, Benford claims to have created and written about the first computer virus
Computer virus
A computer virus is a computer program that can replicate itself and spread from one computer to another. The term "virus" is also commonly but erroneously used to refer to other types of malware, including but not limited to adware and spyware programs that do not have the reproductive ability...
in the late 1960s.

In 2004, Benford proposed that the harmful effects of global warming
Global warming
Global warming refers to the rising average temperature of Earth's atmosphere and oceans and its projected continuation. In the last 100 years, Earth's average surface temperature increased by about with about two thirds of the increase occurring over just the last three decades...
could be reduced by the construction of a rotating Fresnel lens
Fresnel lens
A Fresnel lens is a type of lens originally developed by French physicist Augustin-Jean Fresnel for lighthouses.The design allows the construction of lenses of large aperture and short focal length without the mass and volume of material that would be required by a lens of conventional design...
1,000 kilometres across, floating in space at the Lagrangian point
Lagrangian point
The Lagrangian points are the five positions in an orbital configuration where a small object affected only by gravity can theoretically be stationary relative to two larger objects...
L1. According to Benford, this lens would diffuse the light from the Sun and reduce the solar energy
Insolation
Insolation is a measure of solar radiation energy received on a given surface area in a given time. It is commonly expressed as average irradiance in watts per square meter or kilowatt-hours per square meter per day...
reaching the Earth by approximately 0.5% to 1%. He estimated that this would cost around US$10 billion. His plan has been commented on in a variety of forums. A similar plan was proposed in 1989 by J. T. Early, and again in 1997 by Edward Teller
Edward Teller
Edward Teller was a Hungarian-American theoretical physicist, known colloquially as "the father of the hydrogen bomb," even though he did not care for the title. Teller made numerous contributions to nuclear and molecular physics, spectroscopy , and surface physics...
, Lowell Wood
Lowell Wood
Lowell Wood is an American astrophysicist who has been involved with the Strategic Defense Initiative and with geoengineering studies. He has been affiliated with Lawrence Livermore National Laboratory and the Hoover Institution, and chaired the EMP Commission. Wood invented the Mosquito laser.-...
, and Roderick Hyde. In 2006, Benford pointed out one possible danger in this approach: if this lens were built and global warming were avoided, there would be less incentive to reduce greenhouse gases, and humans might continue to produce too much carbon dioxide until it caused some other environmental catastrophe, such as a chemical change in ocean water
Ocean acidification
Ocean acidification is the name given to the ongoing decrease in the pH and increase in acidity of the Earth's oceans, caused by the uptake of anthropogenic carbon dioxide from the atmosphere....
that could be disastrous to ocean life
Marine biology
Marine biology is the scientific study of organisms in the ocean or other marine or brackish bodies of water. Given that in biology many phyla, families and genera have some species that live in the sea and others that live on land, marine biology classifies species based on the environment rather...
.

Benford serves on the board of directors and the steering committee of the Mars Society
Mars Society
The Mars Society is an international space advocacy non-profit organization dedicated to promoting the human exploration and settlement of the planet Mars. It was founded by Robert Zubrin and others in 1998 and attracted the support of notable science fiction writers and filmmakers, including Kim...
.

Benford's law of controversy is an adage
Adage
An adage is a short but memorable saying which holds some important fact of experience that is considered true by many people, or that has gained some credibility through its long use....
from the 1980 novel Timescape
Timescape
Timescape is a 1980 novel by science fiction writer Gregory Benford . It won the 1980 Nebula and British Science Fiction Awards, and the 1981 John W. Campbell Memorial Award for Best Science Fiction Novel...
, stating:

Passion is inversely proportional to the amount of real information available.

The adage was quoted in an international drug policy article in a peer-reviewed social science journal.