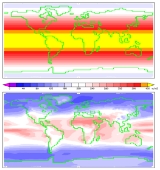 Overview
Insolation is a measure of solar radiation energy received on a given surface area in a given time. It is commonly expressed as average irradiance
Irradiance
Irradiance is the power of electromagnetic radiation per unit area incident on a surface. Radiant emittance or radiant exitance is the power per unit area radiated by a surface. The SI units for all of these quantities are watts per square meter , while the cgs units are ergs per square centimeter...
in watts per square meter (W/m2) or kilowatt-hours per square meter per day (kW·h/(m2·day)) (or hours/day). In the case of photovoltaics
Photovoltaics
Photovoltaics is a method of generating electrical power by converting solar radiation into direct current electricity using semiconductors that exhibit the photovoltaic effect. Photovoltaic power generation employs solar panels composed of a number of solar cells containing a photovoltaic material...
it is commonly measured as kWh/(kWp·y) (kilowatt hours per year per kilowatt peak rating).

The object or surface that solar radiation strikes may be a planet, a terrestrial object inside the atmosphere of a planet, or any object exposed to solar rays outside of an atmosphere, including spacecraft
Spacecraft
A spacecraft or spaceship is a craft or machine designed for spaceflight. Spacecraft are used for a variety of purposes, including communications, earth observation, meteorology, navigation, planetary exploration and transportation of humans and cargo....
.

When insolation reaches Earth's surface, many factors affect weather it is absorbed or reflected. What are three factors?
More
x