Encyclopedia
Green Spain is the name given to the Spanish
Spain
Spain , officially the Kingdom of Spain languages]] under the European Charter for Regional or Minority Languages. In each of these, Spain's official name is as follows:;;;;;;), is a country and member state of the European Union located in southwestern Europe on the Iberian Peninsula...
northern maritime façade exposed to the Atlantic Ocean
Atlantic Ocean
The Atlantic Ocean is the second-largest of the world's oceanic divisions. With a total area of about , it covers approximately 20% of the Earth's surface and about 26% of its water surface area...
in Galicia which also runs along the coastal strip lying north of the Cantabrian
Cantabrian Mountains
The Cantabrian Mountains or Cantabrian Range are one of the main systems of mountain ranges in Spain.They extend for more than approximately 180 miles across northern Spain, from the western limit of the Pyrenees to the edges of the Galician Massif close to Galicia, along the coast of the...
and Basque mountains
Basque mountains
The Basque Mountains are a mountain range situated in the northern Iberian Peninsula. Geographically it is considered as the eastern section of the larger Cantabrian Range...
, along the Bay of Biscay
Bay of Biscay
The Bay of Biscay is a gulf of the northeast Atlantic Ocean located south of the Celtic Sea. It lies along the western coast of France from Brest south to the Spanish border, and the northern coast of Spain west to Cape Ortegal, and is named in English after the province of Biscay, in the Spanish...
. This land strip includes Asturias
Asturias
The Principality of Asturias is an autonomous community of the Kingdom of Spain, coextensive with the former Kingdom of Asturias in the Middle Ages...
, Cantabria
Cantabria
Cantabria is a Spanish historical region and autonomous community with Santander as its capital city. It is bordered on the east by the Basque Autonomous Community , on the south by Castile and León , on the west by the Principality of Asturias, and on the north by the Cantabrian Sea.Cantabria...
, and the northern half of the Basque Country
Basque Country (autonomous community)
The Basque Country is an autonomous community of northern Spain. It includes the Basque provinces of Álava, Biscay and Gipuzkoa, also called Historical Territories....
all the way from Galicia through the French border. 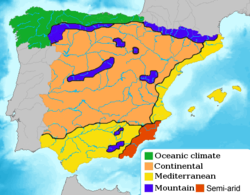 It is called green because it has a wet and temperate oceanic climate
Oceanic climate
An oceanic climate, also called marine west coast climate, maritime climate, Cascadian climate and British climate for Köppen climate classification Cfb and subtropical highland for Köppen Cfb or Cwb, is a type of climate typically found along the west coasts at the middle latitudes of some of the...
which allows lush pastures and forests to thrive, providing a landscape similar to that of Ireland
Ireland
Ireland is an island to the northwest of continental Europe. It is the third-largest island in Europe and the twentieth-largest island on Earth...
, Great Britain
Great Britain
Great Britain or Britain is an island situated to the northwest of Continental Europe. It is the ninth largest island in the world, and the largest European island, as well as the largest of the British Isles...
and the western coast of France
France
The French Republic , The French Republic , The French Republic , (commonly known as France , is a unitary semi-presidential republic in Western Europe with several overseas territories and islands located on other continents and in the Indian, Pacific, and Atlantic oceans. Metropolitan France...
. The climate and landscape are determined by the Atlantic Ocean
Atlantic Ocean
The Atlantic Ocean is the second-largest of the world's oceanic divisions. With a total area of about , it covers approximately 20% of the Earth's surface and about 26% of its water surface area...
winds whose moisture gets trapped by the mountains circumventing the Spanish Atlantic façade. Because of the Foehn effect, the southern slopes fall inside the rain shadow
Rain shadow
A rain shadow is a dry area on the lee side of a mountainous area. The mountains block the passage of rain-producing weather systems, casting a "shadow" of dryness behind them. As shown by the diagram to the right, the warm moist air is "pulled" by the prevailing winds over a mountain...
zone and so Green Spain contrasts starkly with the Spanish drier central plateau. Conversely, in those brief episodes when the southwestern winds blow through the mountains (especially during October-November), the effect reverses, the northern coast gets inside the Foehn winds and is dry and much warmer than the inner plateau, where rain is present.

The average precipitation is about 1,200 mm, much higher than in most areas located in inland central Europe which may be regarded to be wetter than anywhere in Spain, a country generally regarded to be a rather dry one. The main native tree species of this biome
Temperate broadleaf and mixed forests
Mixed forests are a temperate and humid biome. The typical structure of these forests includes four layers. The uppermost layer is the canopy composed of tall mature trees ranging from 33 to 66 m high. Below the canopy is the three-layered, shade-tolerant understory that is roughly 9 to...
are beeches and oaks
Oaks
-Horse races:"Oaks" is generally used to describe a Thoroughbred horse race restricted to 3-year-old fillies. Among the best-known races using the term are:*Epsom Oaks, The Oaks Stakes, at Epsom Downs Racecourse, Surrey, England; the original "Oaks" race...
. During the second half of the 20th century in some areas (especially in coastal areas), the native forests were replaced by plantations of eucalyptus
Eucalyptus
Eucalyptus is a diverse genus of flowering trees in the myrtle family, Myrtaceae. Members of the genus dominate the tree flora of Australia...
and Monterey Pine
Monterey Pine
The Monterey Pine, Pinus radiata, family Pinaceae, also known as the Insignis Pine or Radiata Pine is a species of pine native to the Central Coast of California....
s for its commercial exploitation in the paper industry.

The Pyrenees
Pyrenees
The Pyrenees is a range of mountains in southwest Europe that forms a natural border between France and Spain...
, which sometimes are considered to be in the same geologic system as the Cantabrian Mountains, used to be included in Green Spain, even though the rainfall there has different patterns and the general landscape tends to be more alpine
Alpine climate
Alpine climate is the average weather for a region above the tree line. This climate is also referred to as mountain climate or highland climate....
rather than genuinely oceanic.