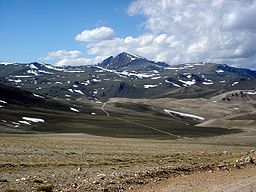 Alpine climate is the average weather (climate
Climate
Climate encompasses the statistics of temperature, humidity, atmospheric pressure, wind, rainfall, atmospheric particle count and other meteorological elemental measurements in a given region over long periods...
) for a region above the tree line. This climate is also referred to as mountain climate or highland climate.

The climate becomes colder at high elevation
Elevation
The elevation of a geographic location is its height above a fixed reference point, most commonly a reference geoid, a mathematical model of the Earth's sea level as an equipotential gravitational surface ....
s—this characteristic is described by the lapse rate of air: air tends to get colder as it rises, since it expands. The dry adiabatic lapse rate is 10 °C per km of elevation or altitude. Therefore, moving up 100 meters on a mountain is roughly equivalent to moving 80 kilometers (45 miles or 0.75° of latitude
Latitude
In geography, the latitude of a location on the Earth is the angular distance of that location south or north of the Equator. The latitude is an angle, and is usually measured in degrees . The equator has a latitude of 0°, the North pole has a latitude of 90° north , and the South pole has a...
) towards the pole. This relationship is only approximate, however, since local factors such as proximity to ocean
Ocean
An ocean is a major body of saline water, and a principal component of the hydrosphere. Approximately 71% of the Earth's surface is covered by ocean, a continuous body of water that is customarily divided into several principal oceans and smaller seas.More than half of this area is over 3,000...
s can drastically modify the climate. The main form of precipitation is often snow, often accompanied by stronger winds.

The Cascade Mountains, the Rocky Mountains
Rocky Mountains
The Rocky Mountains are a major mountain range in western North America. The Rocky Mountains stretch more than from the northernmost part of British Columbia, in western Canada, to New Mexico, in the southwestern United States...
, the Alps
Alps
The Alps is one of the great mountain range systems of Europe, stretching from Austria and Slovenia in the east through Italy, Switzerland, Liechtenstein and Germany to France in the west....
, the Pyrenees
Pyrenees
The Pyrenees is a range of mountains in southwest Europe that forms a natural border between France and Spain...
and Sierra Nevada
Sierra Nevada (Spain)
The Sierra Nevada is a mountain range in the region of provinces of Granada and Almería in Spain. It contains the highest point of continental Spain, Mulhacén at 3478 m above sea level....
, the Andes
Andes
The Andes is the world's longest continental mountain range. It is a continual range of highlands along the western coast of South America. This range is about long, about to wide , and of an average height of about .Along its length, the Andes is split into several ranges, which are separated...
, the Himalayas
Himalayas
The Himalaya Range or Himalaya Mountains Sanskrit: Devanagari: हिमालय, literally "abode of snow"), usually called the Himalayas or Himalaya for short, is a mountain range in Asia, separating the Indian subcontinent from the Tibetan Plateau...
, the Tibetan Plateau
Tibetan Plateau
The Tibetan Plateau , also known as the Qinghai–Tibetan Plateau is a vast, elevated plateau in Central Asia covering most of the Tibet Autonomous Region and Qinghai, in addition to smaller portions of western Sichuan, southwestern Gansu, and northern Yunnan in Western China and Ladakh in...
, the Eastern Highlands
Eastern Highlands
The Eastern or 'East African Highlands is a mountain range in the east of Zimbabwe and one of 4 distinct physiographic divisions on the African continent.-Location and description:...
of Africa, and the central parts of Borneo
Borneo
Borneo is the third largest island in the world and is located north of Java Island, Indonesia, at the geographic centre of Maritime Southeast Asia....
and New Guinea
New Guinea
New Guinea is the world's second largest island, after Greenland, covering a land area of 786,000 km2. Located in the southwest Pacific Ocean, it lies geographically to the east of the Malay Archipelago, with which it is sometimes included as part of a greater Indo-Australian Archipelago...
are examples of highland climates. The mountain climate in the Northern Andes is particularly known for the notion of four zones of elevation:

In mountainous areas with alpine climate, the dominant biome
Biome
Biomes are climatically and geographically defined as similar climatic conditions on the Earth, such as communities of plants, animals, and soil organisms, and are often referred to as ecosystems. Some parts of the earth have more or less the same kind of abiotic and biotic factors spread over a...
is alpine tundra
Alpine tundra
Alpine tundra is a natural region that does not contain trees because it is at high altitude. Alpine tundra is distinguished from arctic tundra, because alpine soils are generally better drained than arctic soils...
.