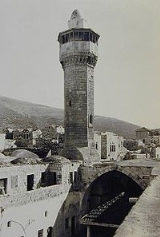 Encyclopedia
Great Mosque of Nablus is the oldest and largest mosque
Mosque
A mosque is a place of worship for followers of Islam. The word is likely to have entered the English language through French , from Portuguese , from Spanish , and from Berber , ultimately originating in — . The Arabic word masjid literally means a place of prostration...
in the Palestinian
Palestinian people
The Palestinian people, also referred to as Palestinians or Palestinian Arabs , are an Arabic-speaking people with origins in Palestine. Despite various wars and exoduses, roughly one third of the world's Palestinian population continues to reside in the area encompassing the West Bank, the Gaza...
city of Nablus
Nablus
Nablus is a Palestinian city in the northern West Bank, approximately north of Jerusalem, with a population of 126,132. Located in a strategic position between Mount Ebal and Mount Gerizim, it is the capital of the Nablus Governorate and a Palestinian commercial and cultural center.Founded by the...
. It was originally built as a Christian church. The mosque is located at the intersection of the main streets of Nablus' Old City on its eastern edge. It has a long, narrow, rectangular floor plan and a silver
Silver
Silver is a metallic chemical element with the chemical symbol Ag and atomic number 47. A soft, white, lustrous transition metal, it has the highest electrical conductivity of any element and the highest thermal conductivity of any metal...
dome.

Local legend in Nablus claims that mosque site was where Joseph's brothers presented Jacob
Jacob
Jacob "heel" or "leg-puller"), also later known as Israel , as described in the Hebrew Bible, the Talmud, the New Testament and the Qur'an was the third patriarch of the Hebrew people with whom God made a covenant, and ancestor of the tribes of Israel, which were named after his descendants.In the...
the blood-stained coat of Joseph to convince him his favorite son was dead. This tradition is more associated with the nearby al-Khadra Mosque
Al-Khadra Mosque
Al-Khadra Mosque also known as Hizn Sidna Yaq'ub Mosque is a mosque situated on the lower slopes of Mount Gerizim in the southwestern quarter of the Old City of Nablus in the West Bank...
, however.

The site of the Great Mosque was originally a basilica
Basilica
The Latin word basilica , was originally used to describe a Roman public building, usually located in the forum of a Roman town. Public basilicas began to appear in Hellenistic cities in the 2nd century BC.The term was also applied to buildings used for religious purposes...
built during the reign of Philip the Arab
Philip the Arab
Philip the Arab , also known as Philip or Philippus Arabs, was Roman Emperor from 244 to 249. He came from Syria, and rose to become a major figure in the Roman Empire. He achieved power after the death of Gordian III, quickly negotiating peace with the Sassanid Empire...
in 244-249 CE. The Byzantine
Byzantine
Byzantine usually refers to the Roman Empire during the Middle Ages.Byzantine may also refer to:* A citizen of the Byzantine Empire, or native Greek during the Middle Ages...
s later constructed a cathedral on the basilica's ruins and this cathedral is shown in the mosaic Map of Madaba in 600 CE. It was likely damaged or destroyed by the Samaritan
Samaritan
The Samaritans are an ethnoreligious group of the Levant. Religiously, they are the adherents to Samaritanism, an Abrahamic religion closely related to Judaism...
s during their raids in 484 and 529, but Emperor Justinian I
Justinian I
Justinian I ; , ; 483– 13 or 14 November 565), commonly known as Justinian the Great, was Byzantine Emperor from 527 to 565. During his reign, Justinian sought to revive the Empire's greatness and reconquer the lost western half of the classical Roman Empire.One of the most important figures of...
had the cathedral restored.

The cathedral
Cathedral
A cathedral is a Christian church that contains the seat of a bishop...
was transformed into the Great Mosque of Nablus in the early Islamic Arab
Caliphate
The term caliphate, "dominion of a caliph " , refers to the first system of government established in Islam and represented the political unity of the Muslim Ummah...
rule in Palestine
Palestine
Palestine is a conventional name, among others, used to describe the geographic region between the Mediterranean Sea and the Jordan River, and various adjoining lands....
, in the 10th century. Arab
Arab
Arab people, also known as Arabs , are a panethnicity primarily living in the Arab world, which is located in Western Asia and North Africa. They are identified as such on one or more of genealogical, linguistic, or cultural grounds, with tribal affiliations, and intra-tribal relationships playing...
geographer al-Muqaddasi
Al-Muqaddasi
Muhammad ibn Ahmad Shams al-Din Al-Muqaddasi , also transliterated as Al-Maqdisi and el-Mukaddasi, was a medieval Arab geographer, author of Ahsan at-Taqasim fi Ma`rifat il-Aqalim .-Biography:Al-Muqaddasi, "the Hierosolomite" was born in Jerusalem in 946 AD...
writes that the Great Mosque was in the “midst” of Nablus, and “is very finely paved”. The Crusaders converted the mosque into a church, but made only few alterations including the construction of an apse. In 1187, the Ayyubids under Saladin
Saladin
Ṣalāḥ ad-Dīn Yūsuf ibn Ayyūb , better known in the Western world as Saladin, was an Arabized Kurdish Muslim, who became the first Sultan of Egypt and Syria, and founded the Ayyubid dynasty. He led Muslim and Arab opposition to the Franks and other European Crusaders in the Levant...
reconsecrated the building as a mosque. The Knights Templar
Knights Templar
The Poor Fellow-Soldiers of Christ and of the Temple of Solomon , commonly known as the Knights Templar, the Order of the Temple or simply as Templars, were among the most famous of the Western Christian military orders...
of the Crusaders burnt it in a raid in 1242.

Arab chronicler Al-Dimashqi in 1300 mentions the Great Mosque as “a fine mosque, in which is prayer is said, and the Qur'an
Qur'an
The Quran , also transliterated Qur'an, Koran, Alcoran, Qur’ān, Coran, Kuran, and al-Qur’ān, is the central religious text of Islam, which Muslims consider the verbatim word of God . It is regarded widely as the finest piece of literature in the Arabic language...
recited day and night, men being appointed thereto”. In 1335, Western traveler James of Verona recorded that the mosque had been “a church of the Christians but now is a mosque of the Saracen
Saracen
Saracen was a term used by the ancient Romans to refer to a people who lived in desert areas in and around the Roman province of Arabia, and who were distinguished from Arabs. In Europe during the Middle Ages the term was expanded to include Arabs, and then all who professed the religion of Islam...
s”. Twenty years later, Ibn Batuta visited it and said in the middle of the mosque was a “tank of sweet water”.

In 1641, the Great Mosque's minaret
Minaret
A minaret مناره , sometimes مئذنه) is a distinctive architectural feature of Islamic mosques, generally a tall spire with an onion-shaped or conical crown, usually either free standing or taller than any associated support structure. The basic form of a minaret includes a base, shaft, and gallery....
was rebuilt, but the mosque compound had remained virtually untouched throughout most of its existence until a severe earthquake struck Palestine
Palestine
Palestine is a conventional name, among others, used to describe the geographic region between the Mediterranean Sea and the Jordan River, and various adjoining lands....
, especially Nablus in 1927, destroying its dome and minaret. In 1935, it was repaired.
The source of this article is wikipedia, the free encyclopedia.  The text of this article is licensed under the GFDL.