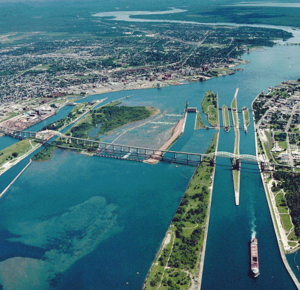 The Great Lakes Waterway is a system of channels and canal
Canal
Canals are man-made channels for water. There are two types of canal:#Waterways: navigable transportation canals used for carrying ships and boats shipping goods and conveying people, further subdivided into two kinds:...
s that makes all of the Great Lakes
Great Lakes
The Great Lakes are a collection of freshwater lakes located in northeastern North America, on the Canada – United States border. Consisting of Lakes Superior, Michigan, Huron, Erie, and Ontario, they form the largest group of freshwater lakes on Earth by total surface, coming in second by volume...
accessible to oceangoing vessels. Its principal civil engineering
Civil engineering
Civil engineering is a professional engineering discipline that deals with the design, construction, and maintenance of the physical and naturally built environment, including works like roads, bridges, canals, dams, and buildings...
components are the Welland Canal
Welland Canal
The Welland Canal is a ship canal in Canada that extends from Port Weller, Ontario, on Lake Ontario, to Port Colborne, Ontario, on Lake Erie. As a part of the St...
, bypassing Niagara Falls
Niagara Falls
The Niagara Falls, located on the Niagara River draining Lake Erie into Lake Ontario, is the collective name for the Horseshoe Falls and the adjacent American Falls along with the comparatively small Bridal Veil Falls, which combined form the highest flow rate of any waterfalls in the world and has...
between Lake Ontario
Lake Ontario
Lake Ontario is one of the five Great Lakes of North America. It is bounded on the north and southwest by the Canadian province of Ontario, and on the south by the American state of New York. Ontario, Canada's most populous province, was named for the lake. In the Wyandot language, ontarío means...
and Lake Erie
Lake Erie
Lake Erie is the fourth largest lake of the five Great Lakes in North America, and the tenth largest globally. It is the southernmost, shallowest, and smallest by volume of the Great Lakes and therefore also has the shortest average water residence time. It is bounded on the north by the...
, and the Soo Locks
Soo Locks
The Soo Locks are a set of parallel locks which enable ships to travel between Lake Superior and the lower Great Lakes. They are located on the St. Marys River between Lake Superior and Lake Huron, between the Upper Peninsula of the US state of Michigan and the Canadian province of Ontario...
, bypassing the rapids of the St. Marys River
St. Marys River (Michigan-Ontario)
The St. Marys River , sometimes written as the St. Mary's River, drains Lake Superior, starting at the end of Whitefish Bay and flowing 74.5 miles southeast into Lake Huron, with a fall of ....
between Lake Superior
Lake Superior
Lake Superior is the largest of the five traditionally-demarcated Great Lakes of North America. It is bounded to the north by the Canadian province of Ontario and the U.S. state of Minnesota, and to the south by the U.S. states of Wisconsin and Michigan. It is the largest freshwater lake in the...
and Lake Huron
Lake Huron
Lake Huron is one of the five Great Lakes of North America. Hydrologically, it comprises the larger portion of Lake Michigan-Huron. It is bounded on the east by the Canadian province of Ontario and on the west by the state of Michigan in the United States...
, at Sault Sainte Marie. Maintained channels serve the St. Clair River
St. Clair River
The St. Clair River is a river in central North America which drains Lake Huron into Lake St Clair, forming part of the international boundary between the Canadian province of Ontario and the U.S. state of Michigan...
and Detroit River
Detroit River
The Detroit River is a strait in the Great Lakes system. The name comes from the French Rivière du Détroit, which translates literally as "River of the Strait". The Detroit River has served an important role in the history of Detroit and is one of the busiest waterways in the world. The river...
between Lake Huron and Lake Erie. A United States Coast Guard
United States Coast Guard
The United States Coast Guard is a branch of the United States Armed Forces and one of the seven U.S. uniformed services. The Coast Guard is a maritime, military, multi-mission service unique among the military branches for having a maritime law enforcement mission and a federal regulatory agency...
icebreaker
Icebreaker
An icebreaker is a special-purpose ship or boat designed to move and navigate through ice-covered waters. Although the term usually refers to ice-breaking ships, it may also refer to smaller vessels .For a ship to be considered an icebreaker, it requires three traits most...
helps keep the passage open for much of the winter, although shipping usually ceases for 2 or 3 months each year.

The Great Lakes Waterway is supplemented by the Saint Lawrence Seaway
Saint Lawrence Seaway
The Saint Lawrence Seaway , , is the common name for a system of locks, canals and channels that permits ocean-going vessels to travel from the Atlantic Ocean to the North American Great Lakes, as far as Lake Superior. Legally it extends from Montreal to Lake Erie, including the Welland Canal...
, which makes the Saint Lawrence River
Saint Lawrence River
The Saint Lawrence is a large river flowing approximately from southwest to northeast in the middle latitudes of North America, connecting the Great Lakes with the Atlantic Ocean. It is the primary drainage conveyor of the Great Lakes Basin...
navigable from Montreal
Montreal
Montreal is a city in Canada. It is the largest city in the province of Quebec, the second-largest city in Canada and the seventh largest in North America...
to Kingston, Ontario
Kingston, Ontario
Kingston, Ontario is a Canadian city located in Eastern Ontario where the St. Lawrence River flows out of Lake Ontario. Originally a First Nations settlement called "Katarowki," , growing European exploration in the 17th Century made it an important trading post...
. The two waterways are often jointly referred to as the St. Lawrence Seaway. The Great Lakes Waterway has larger locks and deeper drafts than the St. Lawrence Seaway with the result that a number of lake freighter
Lake freighter
Lake freighters, or Lakers, are bulk carrier vessels that ply the Great Lakes. The best known was the , the most recent and largest major vessel to be wrecked on the Lakes. These vessels are traditionally called boats, although classified as ships. In the mid-20th century, 300 lakers worked the...
s are confined to the lakes, being small enough to operate on the Waterway but too large to pass down the Seaway.

The Great Lakes Waterway is co-administered by Canada
Canada
Canada is a North American country consisting of ten provinces and three territories. Located in the northern part of the continent, it extends from the Atlantic Ocean in the east to the Pacific Ocean in the west, and northward into the Arctic Ocean...
and the United States
United States
The United States of America is a federal constitutional republic comprising fifty states and a federal district...
.