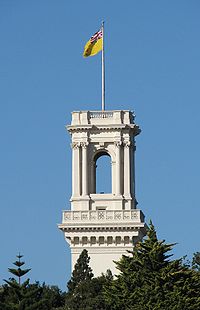 Government House, Melbourne is the office and official residence of the Governor of Victoria
Governors of Victoria
The Governor of Victoria is the representative in the Australian state of Victoria of its monarch, Elizabeth II, Queen of Australia. The Governor performs the same constitutional and ceremonial functions at the state level as does the Governor-General of Australia at the national level...
. It is set next to the Royal Botanic Gardens
Royal Botanic Gardens, Melbourne
The Royal Botanic Gardens Melbourne are internationally renowned botanical gardens located near the centre of Melbourne, Victoria, Australia, on the south bank of the Yarra River. They are 38 hectares of landscaped gardens consisting of a mix of native and non-native vegetation including over...
and surrounded by Kings Domain in Melbourne
Melbourne
Melbourne is the capital and most populous city in the state of Victoria, and the second most populous city in Australia. The Melbourne City Centre is the hub of the greater metropolitan area and the Census statistical division—of which "Melbourne" is the common name. As of June 2009, the greater...
. It was the official residence of the Governor-General of Australia
Governor-General of Australia
The Governor-General of the Commonwealth of Australia is the representative in Australia at federal/national level of the Australian monarch . He or she exercises the supreme executive power of the Commonwealth...
from 1901 to 1930. It is the largest Government House in the former British Empire and is almost double the size of the Viceregal Lodge
Áras an Uachtaráin
Áras an Uachtaráin , formerly the Viceregal Lodge, is the official residence of the President of Ireland. It is located in the Phoenix Park on the northside of Dublin.-Origins:...
, the former residence of the Lords-Lieutenant of Ireland.

Lieutenant-governor of Victoria
Victoria (Australia)
Victoria is the second most populous state in Australia. Geographically the smallest mainland state, Victoria is bordered by New South Wales, South Australia, and Tasmania on Boundary Islet to the north, west and south respectively....
, Charles La Trobe
Charles La Trobe
Charles Joseph La Trobe was the first lieutenant-governor of the colony of Victoria .-Early life:La Trobe was born in London, the son of Christian Ignatius Latrobe, a family of Huguenot origin...
set aside the land for Government House in 1841. Ferdinand von Mueller
Ferdinand von Mueller
Baron Sir Ferdinand Jacob Heinrich von Mueller, KCMG was a German-Australian physician, geographer, and most notably, a botanist.-Early life:...
, Director of the Royal Botanic Gardens in 1857, landscaped the whole area, including Government House reserve, as one parkland. Construction of the building did not start until 1871 and was completed in 1876. Prior to this Governors lived at Toorak House
Toorak House
Toorak House is a mansion located in Melbourne, Australia built in 1849 by well-known Melbourne merchant James Jackson. It is notable for its use as Melbourne's first Government House and having inspired the name for the suburb of Toorak....
, while La Trobe had lived in La Trobe's Cottage
La Trobe's Cottage
La Trobe’s Cottage is a historic cottage in Melbourne, Victoria, Australia, built in 1839 for the first superintendent of the Port Phillip District of New South Wales, Charles La Trobe, and his family. The cottage was constructed out of prefabricated materials imported from England on 50,000 square...
. The building was designed by William Wardell
William Wardell
William Wilkinson Wardell was a Civil Engineer and Architect, notable not only for his work in Australia, the country to which he emigrated in 1858, but also for having a successful career as a surveyor, and an ecclesiastical architect in England and Scotland before his departure.In Australia,...
, Inspector General of the Public Works Department, in the Victorian Period
Victorian architecture
The term Victorian architecture refers collectively to several architectural styles employed predominantly during the middle and late 19th century. The period that it indicates may slightly overlap the actual reign, 20 June 1837 – 22 January 1901, of Queen Victoria. This represents the British and...
Italianate style, and is reminiscent of Queen Victoria's summer residence on the Isle of Wight
Isle of Wight
The Isle of Wight is a county and the largest island of England, located in the English Channel, on average about 2–4 miles off the south coast of the county of Hampshire, separated from the mainland by a strait called the Solent...
, Osborne House
Osborne House
Osborne House is a former royal residence in East Cowes, Isle of Wight, UK. The house was built between 1845 and 1851 for Queen Victoria and Prince Albert as a summer home and rural retreat....
. The building reflects the extravagant style of the period with a booming economy due to the Victorian gold rush
Victorian gold rush
The Victorian gold rush was a period in the history of Victoria, Australia approximately between 1851 and the late 1860s. In 10 years the Australian population nearly tripled.- Overview :During this era Victoria dominated the world's gold output...
.

The main building consists of three parts: the south wing with its extravagant single storey State Ballroom; a grand staircase hall entrance to the three storey State rooms; and two storey vice-regal apartments to the north. Rising from the building is a 145-foot belvedere
Belvedere (structure)
Belvedere is an architectural term adopted from Italian , which refers to any architectural structure sited to take advantage of such a view. A belvedere may be built in the upper part of a building so as to command a fine view...
tower. The mews - a paved area surrounded on three sides by stables, coach houses and staff living quarters is nearby. The garden was designed by John Sayce in 1873 and is thought to be the most intact 19th century mansion garden remaining in Melbourne by the Victorian Heritage Register. William Guilfoyle
William Guilfoyle
William Robert Guilfoyle was a landscape gardener and botanist in Victoria, Australia, acknowledged as the architect of the Royal Botanic Gardens, Melbourne and was responsible for the design of many parks and gardens in Melbourne and regional Victoria.-Early life:Guilfoyle was born in Chelsea,...
, curator of the Melbourne Botanic Gardens, further refined the original garden design with many fine mature trees, including conifers, Australian rainforest species and deciduous trees, which are characteristic of the era and which also reflect Guilfoyle’s personal taste.