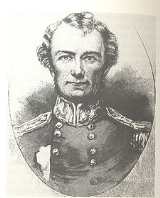 Encyclopedia
Charles Joseph La Trobe (20 March 1801 – 4 December 1875) was the first lieutenant-governor
Governors of Victoria
The Governor of Victoria is the representative in the Australian state of Victoria of its monarch, Elizabeth II, Queen of Australia. The Governor performs the same constitutional and ceremonial functions at the state level as does the Governor-General of Australia at the national level...
of the colony of Victoria (now a state of Australia
Australia
Australia , officially the Commonwealth of Australia, is a country in the Southern Hemisphere comprising the mainland of the Australian continent, the island of Tasmania, and numerous smaller islands in the Indian and Pacific Oceans. It is the world's sixth-largest country by total area...
).

La Trobe was born in London
London
London is the capital city of :England and the :United Kingdom, the largest metropolitan area in the United Kingdom, and the largest urban zone in the European Union by most measures. Located on the River Thames, London has been a major settlement for two millennia, its history going back to its...
, the son of Christian Ignatius Latrobe
Christian Ignatius Latrobe
Christian Ignatius Latrobe was an English clergyman, artist, musician, and composer. He composed a large number of works for the Moravian Church, and most famously edited a Selection of Sacred Music in six volumes between 1806 and 1826, introducing the sacred music of Haydn, Mozart and...
, a family of Huguenot
Huguenot
The Huguenots were members of the Protestant Reformed Church of France during the 16th and 17th centuries. Since the 17th century, people who formerly would have been called Huguenots have instead simply been called French Protestants, a title suggested by their German co-religionists, the...
origin. He was educated in England and later spent time in Switzerland and was active in mountaineering
Mountaineering
Mountaineering or mountain climbing is the sport, hobby or profession of hiking, skiing, and climbing mountains. While mountaineering began as attempts to reach the highest point of unclimbed mountains it has branched into specialisations that address different aspects of the mountain and consists...
; he made a number of ascents in the Alps
Alps
The Alps is one of the great mountain range systems of Europe, stretching from Austria and Slovenia in the east through Italy, Switzerland, Liechtenstein and Germany to France in the west....
1824-1826. In 1832 he visited the United States
United States
The United States of America is a federal constitutional republic comprising fifty states and a federal district...
along with Count Albert Pourtales, and in 1834 travelled from New Orleans to Mexico
Mexico
The United Mexican States , commonly known as Mexico , is a federal constitutional republic in North America. It is bordered on the north by the United States; on the south and west by the Pacific Ocean; on the southeast by Guatemala, Belize, and the Caribbean Sea; and on the east by the Gulf of...
with Washington Irving
Washington Irving
Washington Irving was an American author, essayist, biographer and historian of the early 19th century. He was best known for his short stories "The Legend of Sleepy Hollow" and "Rip Van Winkle", both of which appear in his book The Sketch Book of Geoffrey Crayon, Gent. His historical works...
. La Trobe published several travel books describing his experiences: The Alpenstock (1829), The Pedestrian (1832), The Rambler in North America (1835), and The Rambler in Mexico (1836).

In 1837 he was entrusted with a government commission in the West Indies and reported on the future education of the recently emancipated slaves. He then was sent to the Port Phillip District
Port Phillip District
The Port Phillip District was an historical administrative division of the Colony of New South Wales, existing from September 1836 until 1 July 1851, when it was separated from New South Wales and became the Colony of Victoria....
of New South Wales
New South Wales
New South Wales is a state of :Australia, located in the east of the country. It is bordered by Queensland, Victoria and South Australia to the north, south and west respectively. To the east, the state is bordered by the Tasman Sea, which forms part of the Pacific Ocean. New South Wales...
in 1839 as superintendent though he had little managerial and administrative experience. Melbourne
Melbourne
Melbourne is the capital and most populous city in the state of Victoria, and the second most populous city in Australia. The Melbourne City Centre is the hub of the greater metropolitan area and the Census statistical division—of which "Melbourne" is the common name. As of June 2009, the greater...
had a population of around 3000 at the time and was rapidly expanding. La Trobe commenced works to improve sanitation and streets. As Port Phillip District was a dependency of New South Wales at the time, all land sales, building plans and officer appointments had to be approved by Governor of New South Wales George Gipps
George Gipps
Sir George Gipps was Governor of the colony of New South Wales, Australia, for eight years, between 1838 and 1846. His governorship was during a period of great change for New South Wales and Australia, as well as for New Zealand, which was administered as part of New South Wales for much of this...
, with whom La Trobe had a good personal and working relationship. A Separation Association had been formed in 1840 wanting Port Phillip District to become a separate colony.
In 1841 La Trobe wrote to Gipps, asking him to visit Melbourne to form his own opinion on the separation question. La Trobe did not actively campaign for separation, content that Earl Grey
Earl Grey
Earl Grey is a title in the Peerage of the United Kingdom. It was created in 1806 for General Charles Grey, 1st Baron Grey. He had already been created Baron Grey, of Howick in the County of Northumberland, in 1801, and was made Viscount Howick, in the County of Northumberland, at the same time as...
had included separation in the reorganisation plan for the colonies. By 1851, when Melbourne had a gold-induced exodus, and the Port Phillip district had gained independence from New South Wales, becoming the colony of Victoria, La Trobe became lieutenant-governor for three years - a position he held until 1854. La Trobe, who had suffered self-doubt and criticisms due to his inexperience had submitted his resignation in December 1852 and had to wait for Charles Hotham
Charles Hotham
Sir Charles Hotham, KCB, RN was Lieutenant-governor and, later, Governor of Victoria, Australia from 22 June 1854 to 10 November 1855.-Early life:...
to take his place. Towards the end of his governorship, La Trobe's wife Sophie became ill and died after returning to Europe on 30 January 1854.

Charles La Trobe is also linked to the discovery of a minor piece of evidence suggesting early European exploration of Australia
Theory of Portuguese discovery of Australia
Although most historians hold that the European discovery of Australia began in 1606 with the voyage of the Dutch navigator Willem Janszoon on board the Duyfken, a theory exists that a Portuguese expedition arrived in Australia between 1521 and 1524...
. In 1847, at Limeburners' Point near Geelong, Victoria
Victoria (Australia)
Victoria is the second most populous state in Australia. Geographically the smallest mainland state, Victoria is bordered by New South Wales, South Australia, and Tasmania on Boundary Islet to the north, west and south respectively....
, Charles La Trobe, a keen amateur geologist, was examining the shells from a lime kiln when a worker showed him a set of five keys that he claimed to have found, subsequently named the Geelong Keys
Geelong Keys
The Geelong Keys were a set of keys discovered in 1845 or 1846 in the time of Governor Charles La Trobe at Corio Bay in Victoria, Australia. They were embedded in the stone of the beach in such a way as to make him believe that they had been there for 100–150 years...
. La Trobe concluded that the keys were dropped onto the beach around three centuries ago. In 1977, Kenneth McIntyre hypothesized they were dropped by Portuguese sailors under the command of Cristóvão de Mendonça
Cristóvão de Mendonça
Cristóvão de Mendonça was a Portuguese sailor and statesman who was active in South East Asia in the 16th century.-Mendonça in João de Barros's Décadas da Ásia:...
. Since the keys have long been lost their exact origin cannot be verified. However, research by Geologists Edmund Gill and P.F.B. Alsop showed the age of the deposit they were found in dated to 2330–2800 years old, making La Trobe's dating implausible. The error by La Trobe is quite understandable according to Gill and Alsop, given that in 1847 most people thought the world was only 6000 years old. 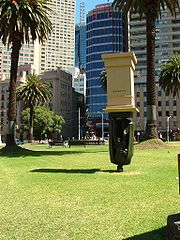 Much of Melbourne's substantial inner city parks and gardens can be attributed to La Trobe's foresight in reserving this land. Melbourne and Victoria are dotted with things named in honour of La Trobe, including La Trobe University
La Trobe University
La Trobe University is a multi-campus university in Victoria, Australia. It was established in 1964 by an Act of Parliament to become the third oldest university in the state of Victoria. The main campus of La Trobe is located in the Melbourne suburb of Bundoora; two other major campuses are...
, La Trobe Street
La Trobe Street, Melbourne
La Trobe Street is a major street in the central business district of Melbourne, Victoria, Australia. It runs roughly from east to west and forms the northern boundary of the CBD ....
in the CBD
Central business district
A central business district is the commercial and often geographic heart of a city. In North America this part of a city is commonly referred to as "downtown" or "city center"...
, the federal electorate of La Trobe
Division of La Trobe
The Division of La Trobe is an Australian Electoral Division in the state of Victoria. It is located in the outer eastern/south-eastern suburbs of Melbourne. It was originally located closer to the city, but redistributions moved it further south-east. It originally included the suburbs of Croydon,...
in Melbourne's outer eastern suburbs, the Latrobe Valley
Latrobe Valley
The Latrobe Valley is an inland geographical region and urban area of Gippsland in the state of Victoria, Australia. It is east of the City Of Melbourne and nestled between the Strzelecki Ranges to the south and the Great Dividing Range to the north – with the highest peak to the north of the...
in southeastern Victoria, Mount LaTrobe in Wilsons Promontory
Wilsons Promontory
Wilsons Promontory is a peninsula that forms the southernmost part of the Australian mainland and is located at . South Point at is the southernmost tip of Wilsons Promontory and hence of mainland Australia...
, the La Trobe Reading Room at the State Library of Victoria
State Library of Victoria
The State Library of Victoria is the central library of the state of Victoria, Australia, located in Melbourne. It is on the block bounded by Swanston, La Trobe, Russell, and Little Lonsdale streets, in the northern centre of the central business district...
, and Charles La Trobe Secondary College.