Encyclopedia
A Gospel harmony is an attempt to merge or harmonize the canonical gospels of the Four Evangelists
Four Evangelists
In Christian tradition the Four Evangelists are Matthew, Mark, Luke, and John, the authors attributed with the creation of the four Gospel accounts in the New Testament that bear the following titles:*Gospel according to Matthew*Gospel according to Mark...
into a single gospel account, the earliest known example being the Diatesseron by Tatian
Tatian
Tatian the Assyrian was an Assyrian early Christian writer and theologian of the 2nd century.Tatian's most influential work is the Diatessaron, a Biblical paraphrase, or "harmony", of the four gospels that became the standard text of the four gospels in the Syriac-speaking churches until the...
in the 2nd century
Christianity in the 2nd century
The 2nd century of Christianity was largely the time of the Apostolic Fathers who were the students of the apostles of Jesus, though there is some overlap as John the Apostle may have survived into the 2nd century and the early Apostolic Father Clement of Rome is said to have died at the end of the...
. A gospel harmony may also establish a chronology for the events
Chronology of Jesus
The chronology of Jesus aims to establish a historical order for some of the events of the life of Jesus in the four canonical gospels. The Christian gospels were primarily written as theological documents rather than historical chronicles and their authors showed little interest in an absolute...
of the life of Jesus
Ministry of Jesus
In the Christian gospels, the Ministry of Jesus begins with his Baptism in the countryside of Judea, near the River Jordan and ends in Jerusalem, following the Last Supper with his disciples. The Gospel of Luke states that Jesus was "about 30 years of age" at the start of his ministry...
depicted in the four canonical gospels and how they relate to each other. Under modern scholarship, the effort has waned to portray any one harmony of events as totally correct. The process can also be hindered by discrepancies between various Gospels accounts of certain events.

The unique material of each gospel complicates the discernment of one, harmonized chronology. However, some consider the unique material crucial to narrowing down the possible chronological order. Some scholars have questioned the historicity of events in the canonical gospels.

The terms harmony and synopsis have been used to refer to approaches that aim to achieve Gospel harmony, although they are different approaches. Technically, a "harmony" weaves together sections of scripture into a narrative, merging the four Gospels. There are four main types of harmony: radical, synthetic, sequential and parallel. A "synopsis", much like a parallel harmony focuses on key events and brings together similar texts or accounts in parallel format, usually in columns. 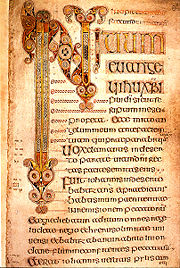 Tatian
Tatian
Tatian the Assyrian was an Assyrian early Christian writer and theologian of the 2nd century.Tatian's most influential work is the Diatessaron, a Biblical paraphrase, or "harmony", of the four gospels that became the standard text of the four gospels in the Syriac-speaking churches until the...
's Diatesseron harmony which dates to about 160AD was perhaps the very first harmony. In the 3rd century the Christian Ammonius of Alexandria
Ammonius of Alexandria (Christian)
Ammonius of Alexandria was a Christian philosopher who lived in the 3rd century. He is not to be confused with Ammonius Saccas, the Neoplatonist philosopher, also from Alexandria....
developed the forerunner of modern synopsis as the Ammonian Sections
Ammonian Sections
Eusebian canons or Eusebian sections, also known as Ammonian Sections, are the system of dividing the four Gospels used between late Antiquity and the Middle Ages. The divisions into chapters and verses used in modern texts date only from the 13th and 16th centuries, respectively...
in which he started with the text of Matthew and copied along parallel events. In the 5th century, Saint Augustine wrote extensively on the subject in his book Harmony of the Gospels
Harmony of the Gospels (Augustine)
The Harmony of the Gospels is a book by the 5th century saint, Augustine of Hippo.In the book Augustine assumes that Matthew was the first Gospel, followed by Mark and that John was the last...
. No other major Gospel harmonies appeared thereafter until the 15th century.

The 16th century witnessed a major increase in the introduction of Gospel harmonies. In this period the parallel column structure was introduced, partly in response to the rise in Biblical criticism. This new format was used to emphasize the trustworthiness of the Gospels. It is not clear who produced the very first parallel harmony, but Charles Dumoulin
Charles Dumoulin
-Life:He was born in Paris. He began practice as an advocate before the parlement of Paris. Dumoulin turned Calvinist, and when the persecution of the Protestants began he went to Germany, where for a long time he taught law at Strasbourg, Besançon and elsewhere. He returned to France in 1557...
in 1565 and Gerhard Mercator in 1569 had used similar approaches. In terms of content and quality, Johann Jacob Griesbach's 1776 synopsis was a notable example.

In the 19th century, other "extract and merge" attempts were made, which were not technical harmonies, e.g. the 1819 Jefferson Bible
Jefferson Bible
The Jefferson Bible, or The Life and Morals of Jesus of Nazareth as it is formally titled, was Thomas Jefferson's effort to extract the doctrine of Jesus by removing sections of the New Testament containing supernatural aspects as well as perceived misinterpretations he believed had been added by...
which placed selected verses in chronological order, but removed large sections of text that Thomas Jefferson
Thomas Jefferson
Thomas Jefferson was the principal author of the United States Declaration of Independence and the Statute of Virginia for Religious Freedom , the third President of the United States and founder of the University of Virginia...
considered too supernatural.

W. G. Rushbrooke's 1880 Synopticon is at times considered a turning point in the history of the synopsis, for it was based on Markan priority
Markan priority
Markan priority is the hypothesis that the Gospel of Mark was the first written of the three Synoptic Gospels, and that the two other synoptic evangelists, Matthew and Luke, used Mark's Gospel as one of their sources. The theory of Markan priority is today accepted by the majority of New Testament...
, i.e. giving priority to the Gospel of Mark. Thirteen years later, John Broadus used historical accounts to assign priorities in his harmony, while previous approaches had used feasts as the major milestones for dividing the life of Christ.

Two separate books, both titled Synopsis of the Four Gospels, one by Kurt Aland
Kurt Aland
Kurt Aland was a German Theologian and Professor of New Testament Research and Church History. He founded the Institut für neutestamentliche Textforschung in Münster and served as its first director for many years...
and the other by John Bernard Orchard, are considered by some to be the standard texts in the field of Gospel harmony since the 20th century. In 2006, Gregg Zegarelli published a harmony with an extensive numbering reference system to track the harmonization process.

For a visual representation of the events, please see: Gospel harmony gallery

The following table, mainly events for which there is also a Wikipedia article, is an example of a parallel harmony, based on the list of key episodes in the Canonical Gospels. The order of events, especially during the ministry period, has been the subject of speculation and scholarly debate. While this harmony compares the work of several scholars, other harmonies may differ substantially on the placement of some events. The episode structure within the table is based on Edward Robinson's A Harmony of the Gospels in Greek as well as Steven L. Cox and Kendell H Easley's Harmony of the Gospels.