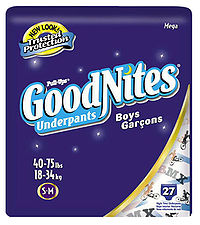 GoodNites are used as a way of managing bedwetting. GoodNites are disposable diapers manufactured by Kimberly-Clark
Kimberly-Clark
Kimberly-Clark Corporation is an American corporation that produces mostly paper-based consumer products. Kimberly-Clark brand name products include "Kleenex" facial tissue, "Kotex" feminine hygiene products, "Cottonelle", Scott and Andrex toilet paper, Wypall utility wipes, "KimWipes"...
(makers of Huggies diapers and Depend Briefs,) and sold under the Huggies
Huggies
Huggies is the brand name of a disposable diaper marketed by Kimberly-Clark. Huggies were first test marketed in 1968, then introduced to the public in 1978.-Product lines:...
brand, designed for children and teenagers who experience bedwetting
Bedwetting
Nocturnal enuresis, commonly called bedwetting, is involuntary urination while asleep after the age at which bladder control usually occurs. Nocturnal enuresis is considered primary when a child has not yet had a prolonged period of being dry...
.

GoodNites are very similar to Kimberly-Clark's Pull-Ups
Pull-Ups
Pull-Ups is a brand of disposable training pants made under the Huggies brand of baby products. The product was first introduced in 1989 and became popular with the motto "I'm a big kid now!" The training pants are marketed with two packages: boys' designs are blue and currently feature characters...
product, and prior to 2007, were marketed under the Pull-Ups brand name. This makes the product convenient for children to wear every night even if they only sleepwet occasionally. GoodNites are not as absorbent as regular diapers, and are not recommended for moderate to heavy wetters, or those who cannot feel the need to urinate or for fecal incontinence. They are intended for use for children from four up through fifteen years of age.

Prior to 2004, GoodNites were unisex, plain white garments with only a faux tag printed at the back of the pant.

The original GoodNites were released in 1994. They were slightly larger, longer, bulkier, and more absorbent than later models. These were plain white, with a faux tag printed at the rear, to help kids know which way to put them on. These originally came in 2 sizes: Medium (45-65 lbs) and Large (65-85 lbs). In 1999, they introduced a new size, XL (85 lbs-125 lbs and up).

In 2000, Kimberly Clark redesigned GoodNites by making them slightly larger than their predecessors. In 2001, a "Cloth-Like Cover" replaced the previous cloth cover, but the overall design of the pants remained the same. In 2003, the physical size of the GoodNites shrank a bit. Later in that year, the "Trim-Fit" style debuted, leading to a drastic reduction in padding thickness and the overall size of the diaper. In spring of 2004, gender-specific GoodNites appeared with customized absorbency zones for boys and girls. Medium GoodNites became Small-Medium and were designed to fit kids 38-70 pounds. Large and Extra Large GoodNites were combined into one size that fit kids 70-125+ pounds. In 2006, GoodNites underwent a revamp so that Kimberly-Clark could try to shed what it felt was a perceived image that their products were simply 'diapers for teenagers', so as not to alienate those who considered it to be 'babyish' to still be wearing diapers at an older age. In 2009, Kimberly-Clark once again revamped the GoodNites product line. New packaging featuring children's faces was advertised on the GoodNites website and released in April of that year. In addition to the new packaging design, the "Jumbo" size package saw a decrease from 17 diapers to 15 diapers in the Small-Medium size, and 13 diapers to 12 diapers in the Large-Extra Large size; the "Mega" size package retained its previous quantity.

The 'medium' size has now been withdrawn completely, with the age-bands of the small and large size extended to bridge the gap. The small size is for children aged 4–7 years, with the large size suitable for ages 8–15. However, despite the revised age brackets, the new large size (ages 8–15) is the same as the old large size (ages 11–15). It is claimed that the large size will comfortably fit up to a waist size of 30 inches (762 mm). Due to the product's stretchiness, it will fit a waist as small as 20 inches (508 mm). The L/XL size is equivalent to size 14-16 underwear.

In 2010 Kimberly Clark re-designed the GoodNites brand to look more like non-protective undergarments.

GoodNites Boxers (for boys) and Sleep Shorts (for girls) were a product manufactured by Kimberly-Clark from 2007–2009, and distributed from 2007–2010; as their name implies, they were designed to look and feel like boxers or shorts. They were blue for boys and pink for girls. The outer covering was cloth-like to look like a boxer-short, but the inside was a plastic diaper. The short cover could be easily lifted by the wearer much like a skirt, revealing a diaper that looks similar to a regular GoodNites diaper but without the cloth-like lining or graphics; in this way, GoodNites boxers were much like traditional diapers. Some teenagers wore these without wearing any pants or other boxers over them.

Although early reports indicated that the boxers were slightly more absorbent than the diapers, they also indicated that they were more expensive. When Kimberly-Clark revamped the GoodNites product line in 2009, they updated the packaging of GoodNites Boxers for boys, changed the product's UPC
Universal Product Code
The Universal Product Code is a barcode symbology , that is widely used in North America, and in countries including the UK, Australia, and New Zealand for tracking trade items in stores. Its most common form, the UPC-A, consists of 12 numerical digits, which are uniquely assigned to each trade item...
, and decreased the quantity from 14 diapers to 13 diapers in the Small-Medium size, and 11 diapers to 10 diapers in the Large-Extra Large size respectively. At the same time, production of the Sleep Shorts for girls ceased. and packages on shelves retained their previous quantity, packaging, and UPCs, allowing distributors to deplete their stock of the product. Kimberly-Clark also removed images of the Sleep Shorts from the GoodNites website, and only made a brief reference to their continued availability from 2009-2010. In 2010, Kimberly-Clark ceased production of GoodNites boxers, once again allowing distributors to deplete their stock of the product. As of 2011, Kimberly-Clark makes no reference to this product line on the official GoodNites website, and major retailers
Hypermarket
In commerce, a hypermarket is a superstore combining a supermarket and a department store. The result is an expansive retail facility carrying a wide range of products under one roof, including full groceries lines and general merchandise...
list the product as being discontinued.

When they were first released, GoodNites were an alternative
Disruptive technology
A disruptive technology or disruptive innovation is an innovation that helps create a new market and value network, and eventually goes on to disrupt an existing market and value network , displacing an earlier technology there...
to waterproof mattress pads, and more expensive disposable youth diapers intended for the disabled; as a result, they lacked any direct competition. By the beginning of the last decade, GoodNites' primary competition consisted of store brand
Store brand
Store brands are a line of products sold by a retailer under a single marketing identity. They bear a similarity to the concept of House brands, Private label brands in the United States, own brands in the UK, and home brands in Australia and generic brands...
disposable sleep pants. In 2002, Procter & Gamble
Procter & Gamble
Procter & Gamble is a Fortune 500 American multinational corporation headquartered in downtown Cincinnati, Ohio and manufactures a wide range of consumer goods....
, Kimberly-Clark's primary competitor, introduced Luvs Sleepdrys
Luvs
Luvs is a brand of disposable diapers made by Procter & Gamble. It was sold as a "deluxe" brand in the late 1980s. Since 1994 it's sold as a budget brand. The brand also has baby wipes.-Diaper sizes:...
as a direct competitor to GoodNites. Luvs Sleepdrys were discontinued in 2004, and store brands once again became the primary form of direct competition to GoodNites for the next four years. In 2008, Procter & Gamble released Pampers Underjams
Underjams
UnderJams are a pull on style diaper used as a way of managing bedwetting that are made by Pampers. They are similar to GoodNites but are less visible and they hold more liquid...
as another direct competitor to GoodNites. As of 2011, GoodNites' competition comes from both Pampers Underjams and store brand disposable sleep pants.