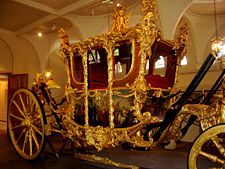 The Gold State Coach is an enclosed, eight horse-drawn carriage used by the British Royal Family
British Royal Family
The British Royal Family is the group of close relatives of the monarch of the United Kingdom. The term is also commonly applied to the same group of people as the relations of the monarch in her or his role as sovereign of any of the other Commonwealth realms, thus sometimes at variance with...
. It was built in the London workshops of Samuel Butler in 1762 and has been used at the coronation of every British monarch
Coronation of the British monarch
The coronation of the British monarch is a ceremony in which the monarch of the United Kingdom is formally crowned and invested with regalia...
since George IV
George IV of the United Kingdom
George IV was the King of the United Kingdom of Great Britain and Ireland and also of Hanover from the death of his father, George III, on 29 January 1820 until his own death ten years later...
. The coach's great age, weight, and lack of maneuverability have limited its use to grand state occasions such as coronation
Coronation
A coronation is a ceremony marking the formal investiture of a monarch and/or their consort with regal power, usually involving the placement of a crown upon their head and the presentation of other items of regalia...
s, royal weddings, and the jubilee
Jubilee
-Anniversaries and celebrations:*Jubilee , Royal Jubilee years are depicted in Egyptian history*Jubilee , the Jubilee year specified in the Torah*Jubilee , a special year for the remission of sins and universal pardon...
(s) of a monarch.

The coach
Coach (carriage)
A coach was originally a large, usually closed, four-wheeled carriage with two or more horses harnessed as a team, controlled by a coachman and/or one or more postilions. It had doors in the sides, with generally a front and a back seat inside and, for the driver, a small, usually elevated seat in...
weighs four ton
Ton
The ton is a unit of measure. It has a long history and has acquired a number of meanings and uses over the years. It is used principally as a unit of weight, and as a unit of volume. It can also be used as a measure of energy, for truck classification, or as a colloquial term.It is derived from...
s and is 24 feet (7.3 m) long and 12 feet (3.7 m) high. It is gilded and features painted panels by Giovanni Cipriani and rich gilded sculpture including three cherub
Cherub
A cherub is a type of spiritual being mentioned in the Hebrew Bible and cited later on in the Christian biblical canons, usually associated with the presence of God...
s on the roof (representing England, Ireland and Scotland) and four triton
Triton (mythology)
Triton is a mythological Greek god, the messenger of the big sea. He is the son of Poseidon, god of the sea, and Amphitrite, goddess of the sea, whose herald he is...
s, one at each corner (representing Britain's imperial power). The body of the coach is slung by braces covered with Morocco
Morocco
Morocco , officially the Kingdom of Morocco , is a country located in North Africa. It has a population of more than 32 million and an area of 710,850 km², and also primarily administers the disputed region of the Western Sahara...
leather
Leather
Leather is a durable and flexible material created via the tanning of putrescible animal rawhide and skin, primarily cattlehide. It can be produced through different manufacturing processes, ranging from cottage industry to heavy industry.-Forms:...
and decorated with gilt buckle
Buckle
The buckle or clasp is a device used for fastening two loose ends, with one end attached to it and the other held by a catch in a secure but adjustable manner. Usually overlooked and taken for granted, the invention of the buckle has been indispensable in securing two ends before the invention of...
s. The interior is lined with velvet and satin. The Gold State Coach is pulled by a team of eight horse
Horse
The horse is one of two extant subspecies of Equus ferus, or the wild horse. It is a single-hooved mammal belonging to the taxonomic family Equidae. The horse has evolved over the past 45 to 55 million years from a small multi-toed creature into the large, single-toed animal of today...
s wearing the Red Morocco harness. Originally driven by a coachman
Coachman
A coachman is a man whose business it is to drive a coach, a horse-drawn vehicle designed for the conveyance of more than one passenger — and of mail — and covered for protection from the elements...
, the horses are now postilion
Postilion
A postilion rider was the driver of a horse-drawn coach or post chaise, mounted on one of the drawing horses...
-ridden in pairs. The coach is housed at the Royal Mews
Royal Mews
A Royal Mews is a mews of the British Royal Family. In London the Royal Mews has occupied two main sites, formerly at Charing Cross, and since the 1820s at Buckingham Palace....
of Buckingham Palace
Buckingham Palace
Buckingham Palace, in London, is the principal residence and office of the British monarch. Located in the City of Westminster, the palace is a setting for state occasions and royal hospitality...
.