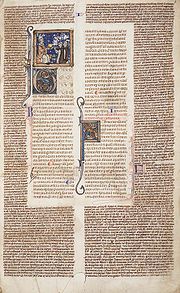 The scholars of the 11th and 12th century legal schools in Italy
Italy
Italy , officially the Italian Republic languages]] under the European Charter for Regional or Minority Languages. In each of these, Italy's official name is as follows:;;;;;;;;), is a unitary parliamentary republic in South-Central Europe. To the north it borders France, Switzerland, Austria and...
, France
France
The French Republic , The French Republic , The French Republic , (commonly known as France , is a unitary semi-presidential republic in Western Europe with several overseas territories and islands located on other continents and in the Indian, Pacific, and Atlantic oceans. Metropolitan France...
and Germany
Germany
Germany , officially the Federal Republic of Germany , is a federal parliamentary republic in Europe. The country consists of 16 states while the capital and largest city is Berlin. Germany covers an area of 357,021 km2 and has a largely temperate seasonal climate...
are identified as glossators in a specific sense. They studied Roman Law
Roman law
Roman law is the legal system of ancient Rome, and the legal developments which occurred before the 7th century AD — when the Roman–Byzantine state adopted Greek as the language of government. The development of Roman law comprises more than a thousand years of jurisprudence — from the Twelve...
based on the Digestae, the Codex of Justinian
Justinian I
Justinian I ; , ; 483– 13 or 14 November 565), commonly known as Justinian the Great, was Byzantine Emperor from 527 to 565. During his reign, Justinian sought to revive the Empire's greatness and reconquer the lost western half of the classical Roman Empire.One of the most important figures of...
, the Authenticae (an abridged Latin translation of selected constitutions of Justinian, promulgated in Greek after the enactment of the Codex and therefore called Novellae), and his law manual, the Institutiones Iustiniani, compiled together in the Corpus Iuris Civilis. (This title is itself only a sixteenth century printers' invention.) Their work transformed the inherited ancient texts into a living tradition of Medieval Roman Law
Medieval Roman law
Medieval Roman law is the continuation and development of ancient Roman law that developed in the European Late Middle Ages. Based on the ancient text of Roman law, the Corpus iuris civilis, it added many new concepts, and formed the basis of the later civil law systems that prevail in most...

The glossators conducted detailed text studies that resulted in collections of explanations. For their work they used a method of study unknown to the Romans themselves, insisting that contradictions in the legal material were only apparent. They tried to harmonize the sources in the conviction that for every legal question only one binding rule exists. Thus they approached these legal sources in a dialectic
Dialectic
Dialectic is a method of argument for resolving disagreement that has been central to Indic and European philosophy since antiquity. The word dialectic originated in Ancient Greece, and was made popular by Plato in the Socratic dialogues...
al way, which is a characteristic of medieval scholasticism
Scholasticism
Scholasticism is a method of critical thought which dominated teaching by the academics of medieval universities in Europe from about 1100–1500, and a program of employing that method in articulating and defending orthodoxy in an increasingly pluralistic context...
. They sometimes needed to invent new concepts not found in Roman law, such as half-proof
Half-proof
Half-proof , was a concept of medieval Roman law, describing a level of evidence between mere suspicion and the full proof needed to convict someone of a crime...
(evidence short of full proof but of some force, such as a single witness). In other medieval disciplines, for example theology
Theology
Theology is the systematic and rational study of religion and its influences and of the nature of religious truths, or the learned profession acquired by completing specialized training in religious studies, usually at a university or school of divinity or seminary.-Definition:Augustine of Hippo...
and philosophy
Philosophy
Philosophy is the study of general and fundamental problems, such as those connected with existence, knowledge, values, reason, mind, and language. Philosophy is distinguished from other ways of addressing such problems by its critical, generally systematic approach and its reliance on rational...
, glosses were also made on the main authoritative texts.

In the Greek language
Greek language
Greek is an independent branch of the Indo-European family of languages. Native to the southern Balkans, it has the longest documented history of any Indo-European language, spanning 34 centuries of written records. Its writing system has been the Greek alphabet for the majority of its history;...
, "γλῶσσα" (glossa) means "tongue" or "language." Originally, the word was used to denote an explanation of an unfamiliar word, but its scope gradually expanded to the more general sense of "commentary". The glossators used to write in the margins of the old texts (glosa marginalis) or between the lines (glosa interlinearis - interlinear glosses). Later these were gathered into large collections, first copied as separate books, but also quickly written in the margins of the legal texts. The medieval copyists at Bologna
Bologna
Bologna is the capital city of Emilia-Romagna, in the Po Valley of Northern Italy. The city lies between the Po River and the Apennine Mountains, more specifically, between the Reno River and the Savena River. Bologna is a lively and cosmopolitan Italian college city, with spectacular history,...
developed a typical script to enhance the legibility of both the main text and the glosses. The typically Bolognese script is called the Littera Bononiensis.

Accursius's Glossa ordinaria, the final standard redaction of these glosses, contains around 100,000 glosses. Accursius worked for decades on this task. There exists no critical edition of his glosses.

The medieval lawyers also wrote glosses on the medieval texts of Canon law
Canon law (Catholic Church)
The canon law of the Catholic Church, is a fully developed legal system, with all the necessary elements: courts, lawyers, judges, a fully articulated legal code and principles of legal interpretation. It lacks the necessary binding force present in most modern day legal systems. The academic...
such as the Decretum Gratiani
Decretum Gratiani
The Decretum Gratiani or Concordia discordantium canonum is a collection of Canon law compiled and written in the 12th century as a legal textbook by the jurist known as Gratian. It forms the first part of the collection of six legal texts, which together became known as the Corpus Juris Canonici...
(around 1140), the Liber Extra of Gregory IX
Pope Gregory IX
Pope Gregory IX, born Ugolino di Conti, was pope from March 19, 1227 to August 22, 1241.The successor of Pope Honorius III , he fully inherited the traditions of Pope Gregory VII and of his uncle Pope Innocent III , and zealously continued their policy of Papal supremacy.-Early life:Ugolino was...
(1234), the Liber Sextus of Boniface VIII
Pope Boniface VIII
Pope Boniface VIII , born Benedetto Gaetani, was Pope of the Catholic Church from 1294 to 1303. Today, Boniface VIII is probably best remembered for his feuds with Dante, who placed him in the Eighth circle of Hell in his Divina Commedia, among the Simonists.- Biography :Gaetani was born in 1235 in...
(1298) and later smaller collections of papal decretals, verdicts in letter form sent to papal delegates. The decrets of the Fourth Lateran Council of 1215, too, have received glosses.

In the older historiography of the medieval learned law, the view developed that after the standard gloss had become fixed a generation of so-called commentators started to take over from the glossators. In fact, the early medieval legal scholars, too, wrote commentaries and lectures, but their main effort was indeed creating glosses.

Most of the older glosses are accessible only in medieval manuscripts: modern editions of only a few manuscripts exist. The main microfilm collections of glossed legal manuscripts are at the Max Planck Institute for European Legal History in Frankfurt am Main, at the universities of Munich, Würzburg, Milan, Leyden and Berkeley.