Encyclopedia
The Decretum Gratiani or Concordia discordantium canonum (in some manuscripts Concordantia discordantium canonum) is a collection of Canon law
Canon law (Catholic Church)
The canon law of the Catholic Church, is a fully developed legal system, with all the necessary elements: courts, lawyers, judges, a fully articulated legal code and principles of legal interpretation. It lacks the necessary binding force present in most modern day legal systems. The academic...
compiled and written in the 12th century as a legal textbook by the jurist
Jurist
A jurist or jurisconsult is a professional who studies, develops, applies, or otherwise deals with the law. The term is widely used in American English, but in the United Kingdom and many Commonwealth countries it has only historical and specialist usage...
known as Gratian
Gratian (jurist)
Gratian, was a 12th century canon lawyer from Bologna. He is sometimes incorrectly referred to as Franciscus Gratianus, Johannes Gratianus, or Giovanni Graziano. The dates of his birth and death are unknown....
. It forms the first part of the collection of six legal texts, which together became known as the Corpus Juris Canonici. It retained legal force in the Roman Catholic Church
Roman Catholic Church
The Catholic Church, also known as the Roman Catholic Church, is the world's largest Christian church, with over a billion members. Led by the Pope, it defines its mission as spreading the gospel of Jesus Christ, administering the sacraments and exercising charity...
until Pentecost 1918, when a revised Code of Canon Law (Codex Iuris Canonici) promulgated by Pope Benedict XV
Pope Benedict XV
Pope Benedict XV , born Giacomo Paolo Giovanni Battista della Chiesa, reigned as Pope from 3 September 1914 to 22 January 1922...
on 27 May 1917 obtained the Force of Law.

Research by Anders Winroth
Anders Winroth
Anders Winroth is a history professor at Yale University.After graduation from Stockholm University, Winroth did his master's and doctoral studies at Columbia University under Robert Somerville. He worked on the Decretum of Gratian. He discovered that the original version was only about half the...
shows that the Decretum existed in two published recension
Recension
Recension is the practice of editing or revising a text based on critical analysis. When referring to manuscripts, this may be a revision by another author...
s. The first dates to some time after 1139, while the second dates to 1150 at the latest. There are several major differences between the two recensions:
These differences led Winroth to conclude that Roman law was not as far developed by 1140 as scholars had previously thought. He has also argued that the second recension was due not to the original author of the first recension (whom he calls Gratian 1), but rather another jurist versed in Roman law. However, Winroth's thesis of two Gratians remains controversial. 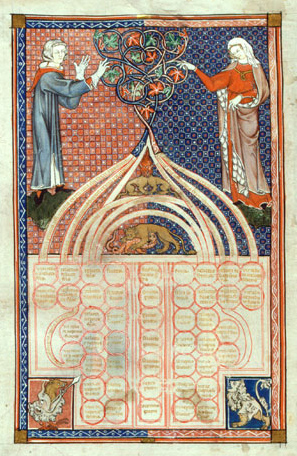 This field of inquiry is hampered by ignorance of the compiler's identity and the existence of manuscripts with abbreviated versions of the text or variant versions not represented by Winroth's two recensions. One of these is the manuscript St. Gall, Stiftsbibliothek, 673 (=Sg), which some have argued contains the earliest known version (borrador) of the Decretum, but which other scholars have argued contains an abbreviation of the first recension expanded with texts taken from the second recension.

Gratian's sources were Roman law, the Bible
Bible
The Bible refers to any one of the collections of the primary religious texts of Judaism and Christianity. There is no common version of the Bible, as the individual books , their contents and their order vary among denominations...
, the writings of (or attributed to) the Church Fathers
Church Fathers
The Church Fathers, Early Church Fathers, Christian Fathers, or Fathers of the Church were early and influential theologians, eminent Christian teachers and great bishops. Their scholarly works were used as a precedent for centuries to come...
, papal decretals, the acts of church councils
Ecumenical council
An ecumenical council is a conference of ecclesiastical dignitaries and theological experts convened to discuss and settle matters of Church doctrine and practice....
and synod
Synod
A synod historically is a council of a church, usually convened to decide an issue of doctrine, administration or application. In modern usage, the word often refers to the governing body of a particular church, whether its members are meeting or not...
s. In most cases, Gratian did not obtain this material from a direct reading of the sources, but rather through intermediate collections. Thanks to the research of modern scholars - in particular, Charles Munier, Titus Lenherr, and Peter Landau - we now know that Gratian made use of a relatively small number of collections in the composition of most of the Decretum, these being:

Other sources are known to have been used in the composition of particular sections of the Decretum:

Gratian himself named his work Concordia Discordantium Canonum - "Concord of Discordant Canons." The name is fitting: Gratian tried to harmonize apparently contradictory canons with each other, by discussing different interpretations and deciding on a solution. This dialectic
Dialectic
Dialectic is a method of argument for resolving disagreement that has been central to Indic and European philosophy since antiquity. The word dialectic originated in Ancient Greece, and was made popular by Plato in the Socratic dialogues...
al approach allowed for other law professors to work with the Decretum and to develop their own solutions and commentaries. These legalists are known as the decretist
Decretist
In the history of canon law, a decretist was student and interpreter of the Decretum Gratiani. Like Gratian, the decretists sought to provide "a harmony of discordant canons" , and they worked towards this through glosses and summaries on Gratian...
s.

The most important commentators were probably Rufin of Bologna
Rufinus (decretist)
Rufinus was an Italian canon lawyer, described as the most influential canonist at the University of Bologna in the mid 12th century. He composed an influential Summa on Gratian's Decretum before 1159....
(died before 1192) and Huguccio
Huguccio
Huguccio was an Italian canon lawyer . His major non-legal work is the Magnae Derivationes or Liber derivationum, dealing with etymologies, based on the earlier Derivationes of Osbernus of Gloucester.He studied at Bologna, probably under Gandolphus, and taught canon law in the same city, perhaps...
(died 1210). Less well-known was the commentary of Simon of Bisignano
Simon of Bisignano
Simon of Bisignano was a teacher of canon law in Bologna in the 1170s. He composed a Summa on the Decretum Gratiani between March 1177 and March 1179. Like Paucapalea, he, too, might have been a student of Gratian himself....
, which consisted of the Glosses on the Decretum and the Summa Simonis.