Give me Liberty, or give me Death!
Topic Home
Discussion
0
Definition 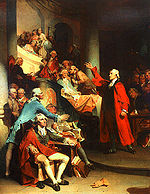 "Give me Liberty, or Give me Death!" is a quotation attributed to Patrick Henry
Patrick Henry
Patrick Henry was an orator and politician who led the movement for independence in Virginia in the 1770s. A Founding Father, he served as the first and sixth post-colonial Governor of Virginia from 1776 to 1779 and subsequently, from 1784 to 1786...
from a speech he made to the Virginia Convention. It was given on March 23, 1775, at St. John's Church
Saint John's Church, Richmond, Virginia
St. John's is an Episcopal church located at 2401 East Broad Street in Richmond, Virginia. Formed from several earlier churches, St. John's is the oldest church in Richmond, built by Col. Richard Randolph in 1741 and giving its name to the Church Hill district...
in Richmond, Virginia
Richmond, Virginia
Richmond is the capital of the Commonwealth of Virginia, in the United States. It is an independent city and not part of any county. Richmond is the center of the Richmond Metropolitan Statistical Area and the Greater Richmond area...
, and is credited with having swung the balance in convincing the Virginia
Virginia
The Commonwealth of Virginia , is a U.S. state on the Atlantic Coast of the Southern United States. Virginia is nicknamed the "Old Dominion" and sometimes the "Mother of Presidents" after the eight U.S. presidents born there...
House of Burgesses
House of Burgesses
The House of Burgesses was the first assembly of elected representatives of English colonists in North America. The House was established by the Virginia Company, who created the body as part of an effort to encourage English craftsmen to settle in North America...
to pass a resolution delivering the Virginia troops to the Revolutionary War
American Revolutionary War
The American Revolutionary War , the American War of Independence, or simply the Revolutionary War, began as a war between the Kingdom of Great Britain and thirteen British colonies in North America, and ended in a global war between several European great powers.The war was the result of the...
. Among the delegates to the convention were future US Presidents Thomas Jefferson
Thomas Jefferson
Thomas Jefferson was the principal author of the United States Declaration of Independence and the Statute of Virginia for Religious Freedom , the third President of the United States and founder of the University of Virginia...
and George Washington
George Washington
George Washington was the dominant military and political leader of the new United States of America from 1775 to 1799. He led the American victory over Great Britain in the American Revolutionary War as commander-in-chief of the Continental Army from 1775 to 1783, and presided over the writing of...
. Reportedly, those in attendance, upon hearing the speech, shouted, "give me liberty or give me death!"

The text of this speech first appeared in print in Life and Character of Patrick Henry by William Wirt
William Wirt (Attorney General)
William Wirt was an American author and statesman who is credited with turning the position of United States Attorney General into one of influence.-History:...
which was first published in 1816, seventeen years after Patrick Henry's death. In 1815, Wirt wrote to a friend, "from 1763 to 1789... not one of his speeches lives in print, writing or memory. All that is told me is, that on such and such an occasion, he made a distinguished speech". Wirt corresponded with men who had heard the speech and others who were acquainted with people who were there at the time. Wirt wrote to Judge St. George Tucker
St. George Tucker
St. George Tucker was a lawyer, professor of law at the College of William and Mary, and judge of Virginia's highest court. In 1813, upon the nomination of President James Madison, he became the United States district judge for Virginia.-Early life:Born in St. George, Bermuda, near Port Royal...
, who had been present for the speech, that "I have taken almost entirely Mr. Henry's speech in the Convention of '75 from you, as well as your description of its effect on you verbatim."

Tucker's account was based upon recollections and not notes. Tucker attempted a reconstruction of only the first two paragraphs of the speech. Tucker wrote, "In vain should I attempt to give any idea of his speech". While this implies a degree of uncertainty over the content of the speech, the amount of research done by Wirt in the process of creating his text strongly argues that he was able to accurately reconstruct the key points, especially the famous quote itself. It is generally agreed that it ended with, "It is in vain, sir, to extenuate the matter. Gentlemen may cry, Peace, Peace — but there is no peace. The war is actually begun! The next gale that sweeps from the north will bring to our ears the clash of resounding arms! Our brethren are already in the field! Why stand we here idle? What is it that gentlemen wish? What would they have? Is life so dear, or peace so sweet, as to be purchased at the price of chains and slavery? Forbid it, Almighty God! I know not what course others may take; but as for me, give me liberty or give me death!"

Ear-witnesses to Henry's hypnotic orations remarked that while they always seemed to be convincing in the moment, they had a difficult time remembering exactly what he had said immediately afterwards: according to Thomas Jefferson
Thomas Jefferson
Thomas Jefferson was the principal author of the United States Declaration of Independence and the Statute of Virginia for Religious Freedom , the third President of the United States and founder of the University of Virginia...
, "Although it was difficult, when [Henry] had spoken, to tell what he had said, yet, while speaking, it always seemed directly to the point. When he had spoken in opposition to my opinion, had produced a great effect, and I myself had been highly delighted and moved, I have asked myself, when he ceased, 'What the devil has he said?' and could never answer the inquiry."

A more contemporary account is found in a letter of James Parker of Norfolk, written to his friend Charles Steuart on April 6, 1775: "You never heard anything more famously insolent than P Henrys speech. He called the King a Tyrant, a fool, a puppet & tool to the Ministry, Said there was now no Englishmen, no Scots no Britons, but a Set of Wretches Sunk in luxury..."

The text of the speech as presented by Wirt contains many biblical allusions and radical pronouncements, and ends by asserting that war has already begun, the only question being whether to fight. In Henry's delivery of the speech, Wirt compared Henry with the Roman statesman Cato
Cato the Younger
Marcus Porcius Cato Uticensis , commonly known as Cato the Younger to distinguish him from his great-grandfather , was a politician and statesman in the late Roman Republic, and a follower of the Stoic philosophy...
, a proponent of Republicanism
Republicanism
Republicanism is the ideology of governing a nation as a republic, where the head of state is appointed by means other than heredity, often elections. The exact meaning of republicanism varies depending on the cultural and historical context...
in opposition to the dictatorship of Julius Caesar
Julius Caesar
Gaius Julius Caesar was a Roman general and statesman and a distinguished writer of Latin prose. He played a critical role in the gradual transformation of the Roman Republic into the Roman Empire....
. A leading proponent of the Stoicism
Stoicism
Stoicism is a school of Hellenistic philosophy founded in Athens by Zeno of Citium in the early . The Stoics taught that destructive emotions resulted from errors in judgment, and that a sage, or person of "moral and intellectual perfection," would not suffer such emotions.Stoics were concerned...
philosophy in which it was believed that death was a guarantee of personal freedom, Cato chose suicide over living in a tyranny. Some scholars believe that this line was inspired by Cato. There is, however, some doubt as to whether Henry actually wrote the speech. Anecdotal evidence indicates that it was written by Lemuel Riddick, an associate of Henry's who fell ill and could not deliver the speech himself, and requested that Henry deliver it in his place.

The play Cato, a Tragedy
Cato, a Tragedy
Cato, a Tragedy is a play written by Joseph Addison in 1712, and first performed on 14 April 1713. Based on the events of the last days of Marcus Porcius Cato Uticensis , a Stoic whose deeds, rhetoric and resistance to the tyranny of Julius Caesar made him an icon of republicanism, virtue,and...
contains the line, "It is not now time to talk of aught/But chains or conquest, liberty or death" (Act II, Scene 4). This play was popular in the colonies and was well-known by the Founding Fathers
Founding Fathers of the United States
The Founding Fathers of the United States of America were political leaders and statesmen who participated in the American Revolution by signing the United States Declaration of Independence, taking part in the American Revolutionary War, establishing the United States Constitution, or by some...
, who used quotes from the play. George Washington
George Washington
George Washington was the dominant military and political leader of the new United States of America from 1775 to 1799. He led the American victory over Great Britain in the American Revolutionary War as commander-in-chief of the Continental Army from 1775 to 1783, and presided over the writing of...
had this play performed for the Continental Army at Valley Forge. The phrase "Liberty or Death" also appears on the Culpeper Minutemen
Culpeper Minutemen
The Culpeper Minutemen was a militia group formed in 1775 in the district around Culpeper, Virginia. Like minutemen in other British colonies, the men drilled in military tactics and trained to respond to emergencies "at a minute's notice."-Organization:...
flag of 1775.

Patrick Henry probalby took this quote from several old strugles where people used this motto before: