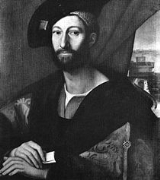 He was born in Florence
Florence
Florence is the capital city of the Italian region of Tuscany and of the province of Florence. It is the most populous city in Tuscany, with approximately 370,000 inhabitants, expanding to over 1.5 million in the metropolitan area....
, Italy
Italy
Italy , officially the Italian Republic languages]] under the European Charter for Regional or Minority Languages. In each of these, Italy's official name is as follows:;;;;;;;;), is a unitary parliamentary republic in South-Central Europe. To the north it borders France, Switzerland, Austria and...
. His brothers were Piero
Piero di Lorenzo de' Medici
Piero de' Medici , called Piero the Unfortunate, was the Gran maestro of Florence from 1492 until his exile in 1494.-Life and death:...
and Giovanni de' Medici
Pope Leo X
Pope Leo X , born Giovanni di Lorenzo de' Medici, was the Pope from 1513 to his death in 1521. He was the last non-priest to be elected Pope. He is known for granting indulgences for those who donated to reconstruct St. Peter's Basilica and his challenging of Martin Luther's 95 Theses...
.

His older brother Piero was briefly the ruler of Florence
Florence
Florence is the capital city of the Italian region of Tuscany and of the province of Florence. It is the most populous city in Tuscany, with approximately 370,000 inhabitants, expanding to over 1.5 million in the metropolitan area....
after Lorenzo's death, until the republican faction drove out the Medici in 1494. Giuliano moved therefore to Venice
Venice
Venice is a city in northern Italy which is renowned for the beauty of its setting, its architecture and its artworks. It is the capital of the Veneto region...
. The Medici
Medici
The House of Medici or Famiglia de' Medici was a political dynasty, banking family and later royal house that first began to gather prominence under Cosimo de' Medici in the Republic of Florence during the late 14th century. The family originated in the Mugello region of the Tuscan countryside,...
family was restored to power after the Holy League drove the French
France
The French Republic , The French Republic , The French Republic , (commonly known as France , is a unitary semi-presidential republic in Western Europe with several overseas territories and islands located on other continents and in the Indian, Pacific, and Atlantic oceans. Metropolitan France...
forces that had supported the Florentine republicans from Italy. This effort was headed by Spain
Spain
Spain , officially the Kingdom of Spain languages]] under the European Charter for Regional or Minority Languages. In each of these, Spain's official name is as follows:;;;;;;), is a country and member state of the European Union located in southwestern Europe on the Iberian Peninsula...
. Giuliano reigned at Florence from 1512 to 1516.

He married Filiberta (1498–1524), daughter of Philip II, Duke of Savoy
Philip II, Duke of Savoy
Philip II , surnamed the Landless was the Duke of Savoy for the brief reign from 1496 to 1497.-Biography:...
, on 22 February 1515, at the court of France, thanks to the intercession of his brother Giovanni, now Pope as Leo X, in the same year Francis I of France
Francis I of France
Francis I was King of France from 1515 until his death. During his reign, huge cultural changes took place in France and he has been called France's original Renaissance monarch...
(Filiberta's nephew) invested him with the title of Duke of Nemours (which had recently reverted once again to the French crown) on the occasion. The French were also apparently grooming him for the throne of Naples
Naples
Naples is a city in Southern Italy, situated on the country's west coast by the Gulf of Naples. Lying between two notable volcanic regions, Mount Vesuvius and the Phlegraean Fields, it is the capital of the region of Campania and of the province of Naples...
(in which the French maintained a historical interest), when Giuliano died prematurely. He was followed at Florence by his nephew Lorenzo.

His portrait, painted in Rome by Raphael (a painter favored by Leo), shows Rome's Castel Sant'Angelo
Castel Sant'Angelo
The Mausoleum of Hadrian, usually known as the Castel Sant'Angelo, is a towering cylindrical building in Parco Adriano, Rome, Italy. It was initially commissioned by the Roman Emperor Hadrian as a mausoleum for himself and his family...
behind a curtain. (A studio version is at the Metropolitan Museum.)

Giuliano's tomb in the Medici Chapel
Medici Chapel
The Medici Chapels is a structure in the Basilica of San Lorenzo, Florence, Italy. It comprises two structures added to Brunelleschi's original design, each intended to celebrate the power of the Medici as Grand Dukes of Tuscany. One is the Sagrestia Nuova, the "New Sacristy", designed by...
in the Church of San Lorenzo
Basilica di San Lorenzo di Firenze
The Basilica di San Lorenzo is one of the largest churches of Florence, Italy, situated at the centre of the city’s main market district, and the burial place of all the principal members of the Medici family from Cosimo il Vecchio to Cosimo III...
, Florence, is ornamented with the Night and Day of Michelangelo
Michelangelo
Michelangelo di Lodovico Buonarroti Simoni , commonly known as Michelangelo, was an Italian Renaissance painter, sculptor, architect, poet, and engineer who exerted an unparalleled influence on the development of Western art...
, along with a statue of Giuliano by Michelangelo. Due to the identical common name (Giuliano de' Medici
Giuliano de' Medici
Giuliano de' Medici may refer to:*Giuliano di Piero de' Medici...
) which he shares with his uncle
Giuliano di Piero de' Medici
Giuliano de' Medici was the second son of Piero de' Medici and Lucrezia Tornabuoni. As co-ruler of Florence, with his brother Lorenzo the Magnificent, he complemented his brother's image as the "patron of the arts" with his own image as the handsome, sporting, "golden boy."-Death:As the opening...
, whose tomb is also in the Medici Chapel, his tomb is often mistaken for that of his uncle.