Encyclopedia
German
Germany
Germany , officially the Federal Republic of Germany , is a federal parliamentary republic in Europe. The country consists of 16 states while the capital and largest city is Berlin. Germany covers an area of 357,021 km2 and has a largely temperate seasonal climate...
athletes have taken part in most of the Olympic Games
Olympic Games
The Olympic Games is a major international event featuring summer and winter sports, in which thousands of athletes participate in a variety of competitions. The Olympic Games have come to be regarded as the world’s foremost sports competition where more than 200 nations participate...
since the first modern Games in 1896
1896 Summer Olympics
The 1896 Summer Olympics, officially known as the Games of the I Olympiad, was a multi-sport event celebrated in Athens, Greece, from April 6 to April 15, 1896. It was the first international Olympic Games held in the Modern era...
. Germany has hosted three Olympic Games, in 1936 both the Winter
1936 Winter Olympics
The 1936 Winter Olympics, officially known as the IV Olympic Winter Games, were a winter multi-sport event which was celebrated in 1936 in the market town of Garmisch-Partenkirchen in Bavaria, Germany. Germany also hosted the Summer Olympics the same year in Berlin...
and Summer
1936 Summer Olympics
The 1936 Summer Olympics, officially known as the Games of the XI Olympiad, was an international multi-sport event which was held in 1936 in Berlin, Germany. Berlin won the bid to host the Games over Barcelona, Spain on April 26, 1931, at the 29th IOC Session in Barcelona...
Games, and the 1972 Summer Olympics
1972 Summer Olympics
The 1972 Summer Olympics, officially known as the Games of the XX Olympiad, were an international multi-sport event held in Munich, West Germany, from August 26 to September 11, 1972....
. In addition, Germany had been selected to host the 1916 Summer Olympics
1916 Summer Olympics
The anticipated 1916 Summer Olympics, which were to be officially known as the Games of the VI Olympiad, were to have been held in Berlin, Germany. However, due to the outbreak of World War I, the games were cancelled.-History:...
as well as the 1940 Winter Olympics
1940 Winter Olympics
The anticipated 1940 Winter Olympics, which would have been officially known as the V Olympic Winter Games, were to be celebrated in 1940 in Sapporo, Japan.The games were cancelled due to the onset of World War II...
, both of which had to be cancelled due to World Wars. After these wars, Germans were banned from participating in 1920, 1924 and 1948. While the country was divided, each of the two German states boycotted the Summer Games: in 1980 West Germany was one of 65 nations which did not go to Moscow
Moscow
Moscow is the capital, the most populous city, and the most populous federal subject of Russia. The city is a major political, economic, cultural, scientific, religious, financial, educational, and transportation centre of Russia and the continent...
in protest at the Soviet invasion of Afghanistan
Afghanistan
Afghanistan , officially the Islamic Republic of Afghanistan, is a landlocked country located in the centre of Asia, forming South Asia, Central Asia and the Middle East. With a population of about 29 million, it has an area of , making it the 42nd most populous and 41st largest nation in the world...
and in 1984 East Germany joined the Soviet Union (and several others) in the boycott of the Summer Games in Los Angeles
Los Ángeles
Los Ángeles is the capital of the province of Biobío, in the commune of the same name, in Region VIII , in the center-south of Chile. It is located between the Laja and Biobío rivers. The population is 123,445 inhabitants...
.

Including the Winter Games of 2010, German athletes have won 1618 medals : 528 gold, 542 silver and 548 bronze. The IOC currently splits these results among four codes, even though only the East German Democratic Republic (GDR) from 1968 to 1988 had sent a separate team to compete against the team of the German NOC that represented Germany (GER) since 1896.

After German organisations had been dissolved by the Allies in 1947, in 1950 the IOC recognized the reorganized Nationales Olympisches Komitee für Deutschland for all of Germany, based in (West) Germany.

Due to the Cold War
Cold War
The Cold War was the continuing state from roughly 1946 to 1991 of political conflict, military tension, proxy wars, and economic competition between the Communist World—primarily the Soviet Union and its satellite states and allies—and the powers of the Western world, primarily the United States...
, an East German state (German Democratic Republic) was created in October 1949, and a separate National Olympic Committee (NOC) for East Germany was established in 1951. It was not immediately recognized by the IOC, which until 1965 required that athletes of the NOC of East Germany join the German team represented by the NOC of (West) Germany. This team, which competed together from 1956 to 1964, is nowadays called the United Team of Germany
United Team of Germany
The Unified Team of Germany , competed in the 1956, 1960, and 1964 Winter and Summer Olympic Games as a united team of athletes from the Federal Republic of Germany and the German Democratic Republic...
(EUA, "Equipe Unifiée Allemande"), but was Germany (GER) then. As a result of the Germany being divided, from 1968 to 1990 two independent teams competed in each of the Games; the original designations were GER for the Federal Republic of Germany (West Germany) and GDR for the German Democratic Republic (East Germany). In 1980 the West German code was changed to FRG (which is currently also applied by the IOC in retrospect). After the GDR ceased to exist in 1990 and its states joined the Federal Republic of Germany, Germany once again was represented by a single team, designated GER.

Additionally, in the early 1950s the French-occupied Saar
Saar (protectorate)
The Saar Protectorate was a German borderland territory twice temporarily made a protectorate state. Since rejoining Germany the second time in 1957, it is the smallest Federal German Area State , the Saarland, not counting the city-states Berlin, Hamburg and Bremen...
had its own NOC and competed at the 1952 Summer Olympics
1952 Summer Olympics
The 1952 Summer Olympics, officially known as the Games of the XV Olympiad, were an international multi-sport event held in Helsinki, Finland in 1952. Helsinki had been earlier given the 1940 Summer Olympics, which were cancelled due to World War II...
before joining the German Olympic team in 1956 and the (West) German state by 1957. 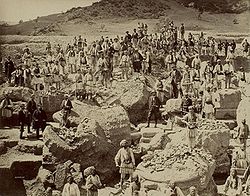 The history of Germany at Olympia predates the First Olympics of 1896, as exclusive access rights to excavate the ancient Greek site have been granted to German Empire
German Empire
The German Empire refers to Germany during the "Second Reich" period from the unification of Germany and proclamation of Wilhelm I as German Emperor on 18 January 1871, to 1918, when it became a federal republic after defeat in World War I and the abdication of the Emperor, Wilhelm II.The German...
archaeologists in 1874. Since 1875, systematic excavations are undertaken by several German expeditions and initiatives.