Encyclopedia
The German
Germany
Germany , officially the Federal Republic of Germany , is a federal parliamentary republic in Europe. The country consists of 16 states while the capital and largest city is Berlin. Germany covers an area of 357,021 km2 and has a largely temperate seasonal climate...
light cruiser
Light cruiser
A light cruiser is a type of small- or medium-sized warship. The term is a shortening of the phrase "light armored cruiser", describing a small ship that carried armor in the same way as an armored cruiser: a protective belt and deck...
Leipzig was the lead ship
Lead ship
The lead ship or class leader is the first of a series or class of ships all constructed according to the same general design. The term is applicable military ships and larger civilian craft.-Overview:...
of her class
Leipzig class cruiser
The Leipzig class was a class of light cruisers of the German Kriegsmarine, consisting of two ships named after German cities, Leipzig and Nürnberg.-History:...
(Nürnberg
German cruiser Nürnberg
The Nürnberg, was a German light cruiser of the Leipzig class named after the city of Nuremberg. Some sources consider the Leipzig and Nürnberg to be of separate, single ship, classes...
was her improved sister ship). She was the fourth German warship to carry the name of the city of Leipzig
Leipzig
Leipzig Leipzig has always been a trade city, situated during the time of the Holy Roman Empire at the intersection of the Via Regia and Via Imperii, two important trade routes. At one time, Leipzig was one of the major European centres of learning and culture in fields such as music and publishing...
.

On 11-12 December 1939, she and sister-ship Nurnberg provided cover for German destroyers mining the approaches to the Thames River, and while returning on 13 December 1939 she (and Nurnberg) were torpedoed by the Royal Navy
Royal Navy
The Royal Navy is the naval warfare service branch of the British Armed Forces. Founded in the 16th century, it is the oldest service branch and is known as the Senior Service...
submarine
Submarine
A submarine is a watercraft capable of independent operation below the surface of the water. It differs from a submersible, which has more limited underwater capability...
Salmon
HMS Salmon (N65)
HMS Salmon was a Royal Navy S-class submarine which was launched on April 30, 1934, and fought in the Second World War. Salmon is one of 12 boats named in the song "Twelve Little S-Boats"....
and severely damaged. Two destroyed boiler rooms were restored as living quarters only and Leipzig was converted into a training ship with a reduced maximum speed of 24 knots. She was recommissioned after repairs on 1 December 1940. When Germany attacked the Soviet Union in June 1941 (Operation "Barbarossa"), the cruiser took part in the shelling of the islands Saaremaa
Saaremaa
Saaremaa is the largest island in Estonia, measuring 2,673 km². The main island of Saare County, it is located in the Baltic Sea, south of Hiiumaa island, and belongs to the West Estonian Archipelago...
and Hiiumaa
Hiiumaa
Hiiumaa is the second largest island belonging to Estonia. It is located in the Baltic Sea, north of the island of Saaremaa, a part of the West Estonian archipelago. Its largest town is Kärdla.-Name:...
in the Baltic Sea
Baltic Sea
The Baltic Sea is a brackish mediterranean sea located in Northern Europe, from 53°N to 66°N latitude and from 20°E to 26°E longitude. It is bounded by the Scandinavian Peninsula, the mainland of Europe, and the Danish islands. It drains into the Kattegat by way of the Øresund, the Great Belt and...
, before returning to her duties as a training vessel. She remained in the Baltic Sea and on 15 October 1944 was accidentally rammed amidships by the heavy cruiser
Heavy cruiser
The heavy cruiser was a type of cruiser, a naval warship designed for long range, high speed and an armament of naval guns roughly 203mm calibre . The heavy cruiser can be seen as a lineage of ship design from 1915 until 1945, although the term 'heavy cruiser' only came into formal use in 1930...
Prinz Eugen
German cruiser Prinz Eugen
Prinz Eugen was an Admiral Hipper-class heavy cruiser, the third member of the class of five vessels. She served with the German Kriegsmarine during World War II. The ship was laid down in April 1936 and launched August 1938; Prinz Eugen entered service after the outbreak of war, in August 1940...
in heavy fog. Heavily damaged (she had been sliced right thru to her keel-plate) and effectively immobilised, she received structural repairs needed to keep her hull from breaking apart and alow her to float. For the remainder of the war she continued to serve as a training, barracks and flak ship. In March 1945 she shelled advancing Soviet army units near Gdynia, but was then towed to Aabenraa
Aabenraa
The city of Aabenraa or Åbenrå , with a population of 15,760 , is situated at the head of the Aabenraa Fjord, an arm of the Little Belt, in Denmark, 38 miles north of the town of Schleswig. Its name originally meant "open beach"...
, Denmark at the end of March.

At the end of World War II
World War II
World War II, or the Second World War , was a global conflict lasting from 1939 to 1945, involving most of the world's nations—including all of the great powers—eventually forming two opposing military alliances: the Allies and the Axis...
Leipzig was surrendered to British forces, moved to Wilhelmshaven
Wilhelmshaven
Wilhelmshaven is a coastal town in Lower Saxony, Germany. It is situated on the western side of the Jade Bight, a bay of the North Sea.-History:...
and surveyed to determine if repairs to her hull and machinery could be made to make her sea-worthy, but was not repaired and scuttled in the North Sea
North Sea
In the southwest, beyond the Straits of Dover, the North Sea becomes the English Channel connecting to the Atlantic Ocean. In the east, it connects to the Baltic Sea via the Skagerrak and Kattegat, narrow straits that separate Denmark from Norway and Sweden respectively...
with a cargo of gas munitions
Chemical warfare
Chemical warfare involves using the toxic properties of chemical substances as weapons. This type of warfare is distinct from Nuclear warfare and Biological warfare, which together make up NBC, the military acronym for Nuclear, Biological, and Chemical...
on 16 December 1946. 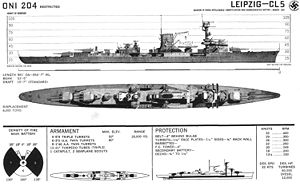