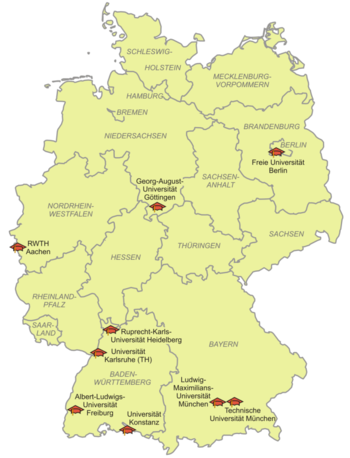 The Excellence Initiative of the German Federal Ministry of Education and Research and the German Research Foundation
Deutsche Forschungsgemeinschaft
The Deutsche Forschungsgemeinschaft is an important German research funding organization and the largest such organization in Europe.-Function:...
aims to promote cutting-edge research and to create outstanding conditions for young scientists at universities, to deepen cooperation between disciplines and institutions, to strengthen international cooperation of research, and to enhance the international appeal of excellent German universities. It is the result of lengthy negotiations between the federal government and the German states.

The Excellence Initiative is conducted by the German Research Foundation (DFG) together with the German Council of Science and Humanities (WR). More than 30 universities in total received funding. It includes three lines of funding:

1st line of funding: The establishment of more than 40 research schools
Graduate school
A graduate school is a school that awards advanced academic degrees with the general requirement that students must have earned a previous undergraduate degree...
for young scientists and PhD
PHD
PHD may refer to:*Ph.D., a doctorate of philosophy*Ph.D. , a 1980s British group*PHD finger, a protein sequence*PHD Mountain Software, an outdoor clothing and equipment company*PhD Docbook renderer, an XML renderer...
candidates, which will receive one million euros each per year.

2nd line of funding: The creation of thirty so-called Clusters of Excellence, that connect universities with leading German research institutes and businesses. Annually, these clusters will receive around 6.5 million euros each to fund their work.

3rd line of funding: The selection of 9 Universities of Excellence, which will be funded highly for their "future concepts", i.e., institutional strategies to promote top-level university research. Particularly this third line of funding has drawn appreciable international attention, both in academia and media.

Altogether 1.9 billion euros of additional funds will be distributed over the coming five years, most of this coming from the federal government. The German Council of Science and Humanities is responsible for the third line of funding, and the German Research Foundation is responsible for the first and second lines of funding. These funds are to be available in the first instance for the universities and their partner institutions until 2012.

Commonly referred to by the media as "elite universities", nine Universities of Excellence receive funding for their future concepts:


The funding for a future concept does often, but not necessarily result in a superior overall budget compared to other German universities. For example, due to its small size, the University of Constance is despite this additional means, not included in the top 20 funded universities in Germany.

Eight of the nine Universities of Excellence are included in the world's top 250 universities, according to the THES - QS Top Universities 2008 and U.S. News and World Report World's Best Colleges and Universities Ranking 2008 respectively: Heidelberg (57); Technical University of Munich (78); LMU Munich (93); Free University of Berlin (137); Freiburg (147); Göttingen (166); Karlsruhe (207); RWTH Aachen (217); Constance (325). As for the separate THES - QS / USN rankings of broad subject areas, Heidelberg ranks within the global top 50 in three of five categories, Technical University of Munich in two of five, and both LMU Munich and Free University of Berlin in one of five. All of the chosen universities are included in the global top 150 in at least one of the subject area rankings.

Federal Education Minister Annette Schavan
Annette Schavan
' is a German politician . She has been the Federal Minister of Education and Research since November 22, 2005.From 1995-2005, she served as the Minister of Culture, Youth and Sports of the German state of Baden-Württemberg...
said following the awards ceremony, "The excellence initiative is writing scientific history. Research at German universities finds itself on a successful, international course."