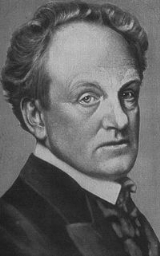 Encyclopedia
Gerhart Hauptmann was a German
Germany
Germany , officially the Federal Republic of Germany , is a federal parliamentary republic in Europe. The country consists of 16 states while the capital and largest city is Berlin. Germany covers an area of 357,021 km2 and has a largely temperate seasonal climate...
dramatist
Playwright
A playwright, also called a dramatist, is a person who writes plays.The term is not a variant spelling of "playwrite", but something quite distinct: the word wright is an archaic English term for a craftsman or builder...
and novelist who received the Nobel Prize in Literature
Nobel Prize in Literature
Since 1901, the Nobel Prize in Literature has been awarded annually to an author from any country who has, in the words from the will of Alfred Nobel, produced "in the field of literature the most outstanding work in an ideal direction"...
in 1912.

Hauptmann was born in Obersalzbrunn, a small town of Silesia
Silesia
Silesia is a historical region of Central Europe located mostly in Poland, with smaller parts also in the Czech Republic, and Germany.Silesia is rich in mineral and natural resources, and includes several important industrial areas. Silesia's largest city and historical capital is Wrocław...
, now known as Szczawno-Zdrój
Szczawno-Zdrój
Szczawno-Zdrój is a spa town in Wałbrzych County, Lower Silesian Voivodeship, in south-western Poland. Prior to 1945 it was in Germany....
and a part of Poland
Poland
Poland , officially the Republic of Poland , is a country in Central Europe bordered by Germany to the west; the Czech Republic and Slovakia to the south; Ukraine, Belarus and Lithuania to the east; and the Baltic Sea and Kaliningrad Oblast, a Russian exclave, to the north...
. He was the son of a hotel-keeper. After attending the village school he went to the Realschule
Realschule
The Realschule is a type of secondary school in Germany, Austria, Switzerland, and Liechtenstein. It has also existed in Croatia , Denmark , Sweden , Hungary and in the Russian Empire .-History:The Realschule was an outgrowth of the rationalism and empiricism of the seventeenth and...
in Breslau, after which he was sent to learn agriculture on his uncle's farm at Jauer
Jawor
Jawor is a town in south-western Poland with 24,347 inhabitants . It is situated in Lower Silesian Voivodeship . It is the seat of Jawor County, and lies approximately west of the regional capital Wrocław.In the town can be found a Protestant Church of Peace...
. Having no taste for country life, Hauptmann soon returned to Breslau and entered the art school with the intention of becoming a sculptor. There he met his life-long friend Josef Block
Josef Block
Josef Block was a German painter.Block was born in Bernstadt an der Weide in Prussian Silesia. He was a scholar of the Breslau Art Academy, where his lifelong friendship with German dramatist Gerhart Hauptmann was established...
. He later studied at the University of Jena and spent the greater part of 1883 and 1884 in Italy. In May 1885, Hauptmann married and settled in Berlin
Berlin
Berlin is the capital city of Germany and is one of the 16 states of Germany. With a population of 3.45 million people, Berlin is Germany's largest city. It is the second most populous city proper and the seventh most populous urban area in the European Union...
and, devoting himself entirely to literary work, soon attained a reputation as one of the chief representatives of the modern drama.

In 1891 he moved to Schreiberhau
Szklarska Poreba
Szklarska Poręba is a town in Jelenia Góra County, Lower Silesian Voivodeship, in south-western Poland. The town has a population of around 7,000...
in Silesia. Hauptmann's first drama, Before Dawn (1889) inaugurated the naturalistic
Naturalism (theatre)
Naturalism is a movement in European drama and theatre that developed in the late 19th and early 20th centuries. It refers to theatre that attempts to create a perfect illusion of reality through a range of dramatic and theatrical strategies: detailed, three-dimensional settings Naturalism is a...
movement in modern German literature. It was followed by The Reconciliation (1890), Lonely People (1891) and The Weavers (1892), a powerful drama depicting the rising of the Silesian weavers in 1844 for which he is best known outside of Germany.

Hauptmann's subsequent work includes the comedies Colleague Crampton (1892), The Beaver Coat
The Beaver Coat
The Beaver Coat is a satirical play by Gerhart Hauptmann premiered in Berlin in 1893.The work is an example of a German naturalistic Diebskomödie, or 'thief's comedy'. The drama takes place "somewhere in Berlin... around the end of the eighties"...
(1893), and The Conflagration (1901), the symbolist
Symbolism (arts)
Symbolism was a late nineteenth-century art movement of French, Russian and Belgian origin in poetry and other arts. In literature, the style had its beginnings with the publication Les Fleurs du mal by Charles Baudelaire...
dream play The Assumption of Hannele
The Assumption of Hannele
The Assumption of Hannele , also known simply as Hannele, is an 1893 play by the German playwright Gerhart Hauptmann. In contrast to Hauptmann's naturalistic dramas, The Assumption of Hannele adopts a more symbolist dramaturgy and includes a dream sequence. The play is the first in world literature...
(1893), and an historical drama Florian Geyer (1895). He also wrote two tragedies
Tragedy
Tragedy is a form of art based on human suffering that offers its audience pleasure. While most cultures have developed forms that provoke this paradoxical response, tragedy refers to a specific tradition of drama that has played a unique and important role historically in the self-definition of...
of Silesian peasant life, Drayman Henschel
Drayman Henschel
Drayman Henschel , also known as Carter Henschel, is an 1898 five-act naturalistic play by the German playwright Gerhart Hauptmann. Unlike his 1892 play The Weavers, Hauptmann focuses on the story's psychological rather than social dimensions...
(1898) and Rose Bernd
Rose Bernd
Rose Bernd is a stage drama in five acts by Gerhart Hauptmann. It premiered October 31, 1903 in Berlin.-Dramatic characters:BERND, deaconROSE BERND, older daughterMARTHEL, younger daughterCHRISTOPHER FLAMM, landowner and magistrate...
(1903), and the dramatic fairy-tales
Fairy tale
A fairy tale is a type of short story that typically features such folkloric characters, such as fairies, goblins, elves, trolls, dwarves, giants or gnomes, and usually magic or enchantments. However, only a small number of the stories refer to fairies...
The Sunken Bell (1896) and And Pippa Dances (1906).

Hauptmann's marital life was difficult and in 1904 he divorced his wife. That same year he married the actress Margarete Marschalk, who had borne him a son four years earlier. The following year he had an affair with the 17-year-old Austria
Austria
Austria , officially the Republic of Austria , is a landlocked country of roughly 8.4 million people in Central Europe. It is bordered by the Czech Republic and Germany to the north, Slovakia and Hungary to the east, Slovenia and Italy to the south, and Switzerland and Liechtenstein to the...
n actress Ida Orloff
Ida Orloff
Ida Orloff was an Austrian actress of silent film and the stage. She starred in the classic Danish silent film Atlantis which was based upon the 1912 novel by Gerhardt Hauptmann...
, whom he met in Berlin when she performed in his play The Assumption of Hannele. Orloff inspired characters in several of Hauptmann's works and he later referred to her as his muse
Muse
The Muses in Greek mythology, poetry, and literature, are the goddesses who inspire the creation of literature and the arts. They were considered the source of the knowledge, related orally for centuries in the ancient culture, that was contained in poetic lyrics and myths...
.

During the First World War Hauptmann was a pacifist. In this period of his career he wrote several gloomy historical-allegorical plays, such as The Bow of Odysseus (1914), The White Saviour (1912–17), and Winter Ballade (1917). After the war, his dramatic abilities appeared to diminish. He wrote two full-length plays that are similar to the early successes: Dorothea Angermann (1926) and Before Sunset (1932). He remained in Germany after Hitler
Adolf Hitler
Adolf Hitler was an Austrian-born German politician and the leader of the National Socialist German Workers Party , commonly referred to as the Nazi Party). He was Chancellor of Germany from 1933 to 1945, and head of state from 1934 to 1945...
's Machtergreifung
Machtergreifung
Machtergreifung is a German word meaning "seizure of power". It is normally used specifically to refer to the Nazi takeover of power in the democratic Weimar Republic on 30 January 1933, the day Hitler was sworn in as Chancellor of Germany, turning it into the Nazi German dictatorship.-Term:The...
and survived the bombing of Dresden
Bombing of Dresden in World War II
The Bombing of Dresden was a military bombing by the British Royal Air Force and the United States Army Air Force and as part of the Allied forces between 13 February and 15 February 1945 in the Second World War...
. His last work was the Atriden-Tetralogie (1942–46). His works in German were published by S. Fischer Verlag.

Hauptmann died at the age of 83 at his home in Agnetendorf (now Jagniątków, Poland) in 1946. Since the Polish communist administration
People's Republic of Poland
The People's Republic of Poland was the official name of Poland from 1952 to 1990. Although the Soviet Union took control of the country immediately after the liberation from Nazi Germany in 1944, the name of the state was not changed until eight years later...
did not allow Hauptmann's relatives to bury him in Agnetendorf (although even the Soviet military government had recommended this), his body was transported in an old cattle wagon to occupied Germany more than a month after his death. He was buried near his cottage on Hiddensee
Hiddensee
Hiddensee is a carfree island in the Baltic Sea, located west of Rügen on the German coast.The island, located 54°33' north longitude 13°07' east, has about 1,300 inhabitants. It was a popular vacation destination for East German tourists during German Democratic Republic times and continues to...
. 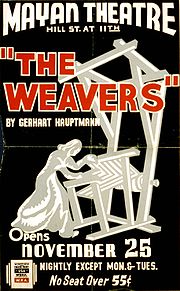