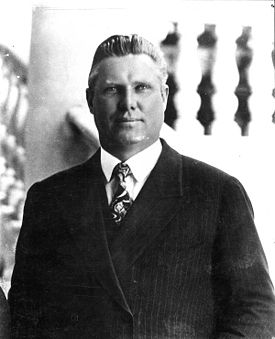 Merrick was born in Springdale, Pennsylvania
Springdale, Pennsylvania
Springdale is a borough in Allegheny County, Pennsylvania, northeast of Pittsburgh along the Allegheny River. The population was 3,405 at the 2010 census.-Geography:Springdale is located at ....
. His father, Solomon G. Merrick, was a Congregationalist
Congregational church
Congregational churches are Protestant Christian churches practicing Congregationalist church governance, in which each congregation independently and autonomously runs its own affairs....
minister. The family moved to Miami, Florida
Miami, Florida
Miami is a city located on the Atlantic coast in southeastern Florida and the county seat of Miami-Dade County, the most populous county in Florida and the eighth-most populous county in the United States with a population of 2,500,625...
from Duxbury, MA in 1898 when George was 12 years old. He attended Rollins College
Rollins College
Rollins College is a private, coeducational liberal arts college located in Winter Park, Florida , along the shores of Lake Virginia....
in Winter Park
Winter Park, Florida
Winter Park is a suburban city in Orange County, Florida, United States. The population was 24,090 at the 2000 census. According to the U.S. Census Bureau's 2006 estimates, the city had a population of 28,083. It is part of the Orlando–Kissimmee Metropolitan Statistical Area...
.

In October, 1915, George Merrick was appointed by the governor of Florida
Florida
Florida is a state in the southeastern United States, located on the nation's Atlantic and Gulf coasts. It is bordered to the west by the Gulf of Mexico, to the north by Alabama and Georgia and to the east by the Atlantic Ocean. With a population of 18,801,310 as measured by the 2010 census, it...
to replace F.A. Bryant as the county commissioner in District 1. He spent the next 15 months on the commission championing the building of roads in South Florida, including major arteries that would later serve to connect his well-planned community of Coral Gables with the fast-growing city of Miami. Along with Commissioner Edward DeVere Burr of Arch Creek
Arch Creek
Arch Creek was an early settlement in Miami-Dade County, Florida, in present-day metropolitan Miami. Tequesta Indians thrived here before the first Europeans arrived in the early 16th century. The name is derived from the natural limestone bridge spanning across the creek. It is part of the Arch...
, the two men ushered the vast majority of all road construction projects in Dade County, including the construction of South Dixie Highway (US 1)
U.S. Route 1 in Florida
U.S. Route 1 in Florida runs along the state's east coast from Key West to its crossing of the St. Marys River into Georgia north of Boulogne, and south of Folkston. US 1 was designated through Florida when the U.S. Highway System was established in 1926.US 1 runs in the state of Florida, and...
, the Tamiami Trail
Tamiami Trail
The Tamiami Trail is the southernmost of U.S. Highway 41 from State Road 60 in Tampa to U.S. Route 1 in Miami. The road also has the hidden designation of State Road 90....
across the Everglades
Everglades
The Everglades are subtropical wetlands in the southern portion of the U.S. state of Florida, comprising the southern half of a large watershed. The system begins near Orlando with the Kissimmee River, which discharges into the vast but shallow Lake Okeechobee...
, the County Causeway
MacArthur Causeway
The General Douglas MacArthur Causeway is a six-lane causeway which connects Downtown, Miami, Florida and South Beach, Miami Beach via Biscayne Bay....
to Miami Beach, Ingraham Highway (later known as Old Cutler Road
Old Cutler Road
Old Cutler Road is an off-grid plan north-south main road that runs south of Downtown Miami in Miami-Dade County, Florida, United States.-Route description:...
) along the coast, the Miami Canal Highway and many others. These improvements allowed the population of Greater Miami to quadruple from 1915 to 1921, transforming a pioneer territory into a burgeoning metropolis.

Beginning in 1922, on 3,000 acres (12 km²) of citrus
Citrus
Citrus is a common term and genus of flowering plants in the rue family, Rutaceae. Citrus is believed to have originated in the part of Southeast Asia bordered by Northeastern India, Myanmar and the Yunnan province of China...
groves and land covered in pine trees which his father had left him, Merrick began carving out a town along the lines of the City Beautiful movement
City Beautiful movement
The City Beautiful Movement was a reform philosophy concerning North American architecture and urban planning that flourished during the 1890s and 1900s with the intent of using beautification and monumental grandeur in cities. The movement, which was originally associated mainly with Chicago,...
. He designed the new town in great detail, featuring wide, tree-lined boulevards, delicate bridges and sedate urban golf course
Golf course
A golf course comprises a series of holes, each consisting of a teeing ground, fairway, rough and other hazards, and a green with a flagstick and cup, all designed for the game of golf. A standard round of golf consists of playing 18 holes, thus most golf courses have this number of holes...
s. Merrick's secret was his passionate devotion to aesthetics.

George Merrick is credited with the establishment of the University of Miami
University of Miami
The University of Miami is a private, non-sectarian university founded in 1925 with its main campus in Coral Gables, Florida, a medical campus in Miami city proper at Civic Center, and an oceanographic research facility on Virginia Key., the university currently enrolls 15,629 students in 12...
in Coral Gables in 1925 with a donation of 600 acres (2.4 km²) of land and a pledge of US$5 million. The following year, weeks before the start of the inaugural school year, a devastating hurricane
1926 Miami Hurricane
The 1926 Miami hurricane was a Category 4 hurricane that devastated Miami in September 1926. The storm also caused significant damage in the Florida Panhandle, the U.S. state of Alabama, and the Bahamas...
on September 17–18 followed by the Great Depression
Great Depression
The Great Depression was a severe worldwide economic depression in the decade preceding World War II. The timing of the Great Depression varied across nations, but in most countries it started in about 1929 and lasted until the late 1930s or early 1940s...
ended Merrick's dreams at Coral Gables. He moved to Matecumbe Key, where he opened his Caribee Club not far from the famous Long Key Fishing Camp
Long Key Fishing Camp
Long Key Fishing Camp was established on Long Key in Florida in 1908 by Henry M. Flagler's Florida East Coast Railway Company for the use of tourists to enjoy what was described as "some of the best fishing in the world." It initially served a housing for some of the employees who were building the...
on nearby Long Key
Long Key
Long Key is an island in the middle Florida Keys.U.S. 1 crosses the key at approximately mile markers 65.5--71, between Fiesta Key and Conch Key....
.

The monstrous Labor Day Hurricane of 1935
Labor Day Hurricane of 1935
The 1935 Labor Day Hurricane was the strongest tropical cyclone of the 1935 Atlantic hurricane season, and one of the most intense hurricanes to make landfall in the United States in recorded history...
, called the "Storm of the Century", destroyed almost everything on the Middle Keys, including Merrick's Caribee Club. He became postmaster
Postmaster
A postmaster is the head of an individual post office. Postmistress is not used anymore in the United States, as the "master" component of the word refers to a person of authority and has no gender quality...
of Miami in 1940, and died in 1942 at the age of 55.