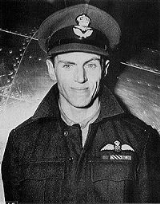 Overview
George Frederick "Buzz" Beurling DSO
Distinguished Service Order
The Distinguished Service Order is a military decoration of the United Kingdom, and formerly of other parts of the British Commonwealth and Empire, awarded for meritorious or distinguished service by officers of the armed forces during wartime, typically in actual combat.Instituted on 6 September...
, DFC
Distinguished Flying Cross (United Kingdom)
The Distinguished Flying Cross is a military decoration awarded to personnel of the United Kingdom's Royal Air Force and other services, and formerly to officers of other Commonwealth countries, for "an act or acts of valour, courage or devotion to duty whilst flying in active operations against...
, DFM
Distinguished Flying Medal
The Distinguished Flying Medal was a military decoration awarded to personnel of the Royal Air Force and the other services, and formerly also to personnel of other Commonwealth countries, below commissioned rank, for "an act or acts of valour, courage or devotion to duty whilst flying in active...
& Bar
Medal bar
A medal bar or medal clasp is a thin metal bar attached to the ribbon of a military decoration, civil decoration, or other medal. It is most commonly used to indicate the campaign or operation the recipient received the award for, and multiple bars on the same medal are used to indicate that the...
, RCAF
Royal Canadian Air Force
The history of the Royal Canadian Air Force begins in 1920, when the air force was created as the Canadian Air Force . In 1924 the CAF was renamed the Royal Canadian Air Force and granted royal sanction by King George V. The RCAF existed as an independent service until 1968...
(6 December 1921 – 20 May 1948), was the most successful Canadian
Canada
Canada is a North American country consisting of ten provinces and three territories. Located in the northern part of the continent, it extends from the Atlantic Ocean in the east to the Pacific Ocean in the west, and northward into the Arctic Ocean...
fighter
Flying ace
A flying ace or fighter ace is a military aviator credited with shooting down several enemy aircraft during aerial combat. The actual number of aerial victories required to officially qualify as an "ace" has varied, but is usually considered to be five or more...
pilot
Aviator
An aviator is a person who flies an aircraft. The first recorded use of the term was in 1887, as a variation of 'aviation', from the Latin avis , coined in 1863 by G. de la Landelle in Aviation Ou Navigation Aérienne...
of the Second World War.

Beurling was recognized as "Canada's most famous hero of Second World War", as "The Falcon of Malta" and the "Knight of Malta", having shot down 27 Axis aircraft in just 14 days over the besieged Mediterranean island. Before the war ended his total climbed to either 31 or 31 1/3.

I would like to know more of George Beurlings life after 1944 does anyone know if he returned to England later in 1944 ? why is so little known about ...