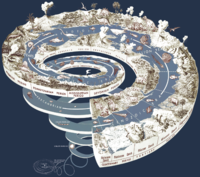 Geochronology is the science
Science
Science is a systematic enterprise that builds and organizes knowledge in the form of testable explanations and predictions about the universe...
of determining the age of rocks
Rock (geology)
In geology, rock or stone is a naturally occurring solid aggregate of minerals and/or mineraloids.The Earth's outer solid layer, the lithosphere, is made of rock. In general rocks are of three types, namely, igneous, sedimentary, and metamorphic...
, fossil
Fossil
Fossils are the preserved remains or traces of animals , plants, and other organisms from the remote past...
s, and sediment
Sediment
Sediment is naturally occurring material that is broken down by processes of weathering and erosion, and is subsequently transported by the action of fluids such as wind, water, or ice, and/or by the force of gravity acting on the particle itself....
s, within a certain degree of uncertainty inherent to the method used. A variety of dating methods are used by geologists to achieve this, and schemes of classification and terminology have been proposed. The interdisciplinary approach of using several methods can often achieve best results.

Geochronology is different in application from biostratigraphy
Biostratigraphy
Biostratigraphy is the branch of stratigraphy which focuses on correlating and assigning relative ages of rock strata by using the fossil assemblages contained within them. Usually the aim is correlation, demonstrating that a particular horizon in one geological section represents the same period...
, which is the science of assigning sedimentary rocks to a known geological period via describing, cataloguing and comparing fossil floral and faunal assemblages. Biostratigraphy does not directly provide an absolute age determination of a rock, but merely places it within an interval of time at which that fossil assemblage is known to have coexisted. Both disciplines work together hand in hand however, to the point they share the same system of naming rock layers
Stratum
In geology and related fields, a stratum is a layer of sedimentary rock or soil with internally consistent characteristics that distinguish it from other layers...
and the time spans utilized to classify layers within a strata.

By measuring the amount of radioactive decay
Radioactive decay
Radioactive decay is the process by which an atomic nucleus of an unstable atom loses energy by emitting ionizing particles . The emission is spontaneous, in that the atom decays without any physical interaction with another particle from outside the atom...
of a radioactive isotope with a known half-life
Half-life
Half-life, abbreviated t½, is the period of time it takes for the amount of a substance undergoing decay to decrease by half. The name was originally used to describe a characteristic of unstable atoms , but it may apply to any quantity which follows a set-rate decay.The original term, dating to...
, geologists can establish the absolute age of the parent material. A number of radioactive isotopes are used for this purpose, and depending on the rate of decay, are used for dating different geological periods. More slowly decaying isotopes are useful for longer periods of time, but less accurate in absolute years. With the exception of the radiocarbon method, most of these techniques are actually based on measuring an increase in the abundance of a radiogenic isotope, which is the decay-product of the radioactive parent isotope. Two or more radiometric methods can be used in concert to achieve more robust results. Most radiometric methods are suitable for geological time only, but some such as the radiocarbon method and the 40Ar/39Ar dating method can be extended into the time of early human life and into recorded history.

Some of the commonly-used techniques are:


Differences between chronostratigraphy and geochronology