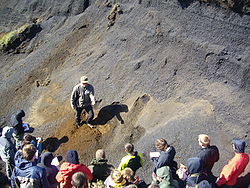 Tephrochronology is a geochronological
Geochronology
Geochronology is the science of determining the age of rocks, fossils, and sediments, within a certain degree of uncertainty inherent to the method used. A variety of dating methods are used by geologists to achieve this, and schemes of classification and terminology have been proposed...
technique that uses discrete layers of tephra
Tephra
200px|thumb|right|Tephra horizons in south-central [[Iceland]]. The thick and light coloured layer at center of the photo is [[rhyolitic]] tephra from [[Hekla]]....
—volcanic ash from a single eruption—to create a chronological framework in which paleoenvironmental or archaeological
Archaeology
Archaeology, or archeology , is the study of human society, primarily through the recovery and analysis of the material culture and environmental data that they have left behind, which includes artifacts, architecture, biofacts and cultural landscapes...
records can be placed. Such an established event provides a "tephra horizon". The premise of the technique is that each volcanic event produces ash with a unique chemical "fingerprint" that allows the deposit to be identified across the area affected by fallout. Thus, once the volcanic event has been independently dated, the tephra horizon will act as time marker.

The main advantages of the technique are that the volcanic ash
Volcanic ash
Volcanic ash consists of small tephra, which are bits of pulverized rock and glass created by volcanic eruptions, less than in diameter. There are three mechanisms of volcanic ash formation: gas release under decompression causing magmatic eruptions; thermal contraction from chilling on contact...
layers can be relatively easily identified in many sediments and that the tephra layers are deposited relatively instantaneously over a wide spatial area. This means they provide accurate temporal marker layers which can be used to verify or corroborate other dating techniques, linking sequences widely separated by location into a unified chronology that correlates climatic sequences and events.

Tephrochronology requires accurate geochemical fingerprinting (usually via an electron microprobe
Electron microprobe
An electron microprobe , also known as an electron probe microanalyzer or electron micro probe analyzer , is an analytical tool used to non-destructively determine the chemical composition of small volumes of solid materials...
). An important recent advance is the use of LA-ICP-MS (i.e. laser ablation
Laser ablation
Laser ablation is the process of removing material from a solid surface by irradiating it with a laser beam. At low laser flux, the material is heated by the absorbed laser energy and evaporates or sublimates. At high laser flux, the material is typically converted to a plasma...
ICP-MS
ICP-MS
Inductively coupled plasma mass spectrometry is a type of mass spectrometry that is highly sensitive and capable of the determination of a range of metals and several non-metals at concentrations below one part in 1012...
) to measure trace-element abundances in individual tephra shards. One problem in tephrochronology is that tephra chemistry can become altered over time, at least for basaltic tephras.

Early tephra horizons were identified with the Saksunarvatn tephra
Saksunarvatn tephra
In the science of tephrochronology, the Saksunarvatn tephra is volcanic ejecta that formed an ash layer that is useful in dating Northern European sediment layers that were laid down during the Boreal period, the warm climate phase that followed the cold snap of the Younger Dryas as the earth made...
(Icelandic origin, ca
Circa
Circa , usually abbreviated c. or ca. , means "approximately" in the English language, usually referring to a date...
10.2 cal. ka BP), forming a horizon in the late Pre-Boreal
Boreal (period)
In paleoclimatology of the Holocene, the Boreal was the first of the Blytt-Sernander sequence of north European climatic phases that were originally based on the study of Danish peat bogs, named for Axel Blytt and Rutger Sernander, who first established the sequence. In peat bog sediments, the...
of Northern Europe, the Vedde ash (also Icelandic in origin, ca 12.0 cal. ka BP) and the Laacher See tephra (in the Eifel volcanic field, ca 12.9 cal. ka BP). Major volcanoes which have been used in tephrochronological studies include Vesuvius, Hekla
Hekla
Hekla is a stratovolcano located in the south of Iceland with a height of . Hekla is one of Iceland's most active volcanoes; over 20 eruptions have occurred in and around the volcano since 874. During the Middle Ages, Icelanders called the volcano the "Gateway to Hell."Hekla is part of a volcanic...
and Santorini
Santorini
Santorini , officially Thira , is an island located in the southern Aegean Sea, about southeast from Greece's mainland. It is the largest island of a small, circular archipelago which bears the same name and is the remnant of a volcanic caldera...
. Minor volcanic events may also leave their fingerprint in the geological record: Hayes Volcano
Hayes Volcano
Hayes Volcano is a stratovolcano in southwestern Matanuska-Susitna Borough, Alaska, 135 km northwest of Anchorage, that was not discovered until 1975. It is responsible for a series of six major tephra layers in the Cook Inlet region of Alaska...
is responsible for a series of six major tephra layers in the Cook Inlet region of Alaska. Tephra horizons provide a synchronous check against which to correlate the palaeoclimatic reconstructions that are obtained from terrestrial records, like fossil pollen studies (palynology
Palynology
Palynology is the science that studies contemporary and fossil palynomorphs, including pollen, spores, orbicules, dinoflagellate cysts, acritarchs, chitinozoans and scolecodonts, together with particulate organic matter and kerogen found in sedimentary rocks and sediments...
), from varve
Varve
A varve is an annual layer of sediment or sedimentary rock.The word 'varve' is derived from the Swedish word varv whose meanings and connotations include 'revolution', 'in layers', and 'circle'. The term first appeared as Hvarfig lera on the first map produced by the Geological Survey of Sweden in...
s in lake sediments or from marine deposits and ice-core records
Ice core
An ice core is a core sample that is typically removed from an ice sheet, most commonly from the polar ice caps of Antarctica, Greenland or from high mountain glaciers elsewhere. As the ice forms from the incremental build up of annual layers of snow, lower layers are older than upper, and an ice...
, and to extend the limits of carbon-14 dating.

A pioneer in the use of tephra layers as marker horizon
Marker horizon
Marker horizons or chronohorizons or marker beds are stratigraphic units of the same age and of such distinctive composition and appearance, that, despite their presence in separate geographic locations, there is no doubt about their being of equivalent age and of common origin...
s to establish chronology was Sigurdur Thorarinsson, who began by studying the layers he found in his native Iceland. Since the late 1990s, techniques developed by Chris S. M. Turney (QUB, Belfast; now University of Exeter
University of Exeter
The University of Exeter is a public university in South West England. It belongs to the 1994 Group, an association of 19 of the United Kingdom's smaller research-intensive universities....
) and others for extracting tephra horizons invisible to the naked eye ("cryptotephra") have revolutionised the application of tephrochronology. This technique relies upon the difference between the specific gravity of the microtephra shards and the host sediment matrix. It has led to the first discovery of the Vedde ash on the mainland of Britain, in Sweden, in the Netherlands, in the Swiss Lake Soppensee
Soppensee
Soppensee is a lake in Canton of Lucerne, Switzerland. The surface area is 0.227 km². The lake and its surroundings are located in the municipalities of Buttisholz, Menznau and Ruswil....
and in two sites on the Karelian Isthmus
Karelian Isthmus
The Karelian Isthmus is the approximately 45–110 km wide stretch of land, situated between the Gulf of Finland and Lake Ladoga in northwestern Russia, to the north of the River Neva . Its northwestern boundary is the relatively narrow area between the Bay of Vyborg and Lake Ladoga...
of Baltic Russia.
It has also revealed previously undetected ash layers, such as the Borrobol Tephra first discovered in northern Scotland
Scotland
Scotland is a country that is part of the United Kingdom. Occupying the northern third of the island of Great Britain, it shares a border with England to the south and is bounded by the North Sea to the east, the Atlantic Ocean to the north and west, and the North Channel and Irish Sea to the...
, dated to ca. 14.4 cal. ka BP, the microtephra horizons of equivalent geochemistry from southern Sweden
Sweden
Sweden , officially the Kingdom of Sweden , is a Nordic country on the Scandinavian Peninsula in Northern Europe. Sweden borders with Norway and Finland and is connected to Denmark by a bridge-tunnel across the Öresund....
, dated at 13,900 Cariaco varve yrs BP and from northwest Scotland, dated at 13.6 cal. ka BP.